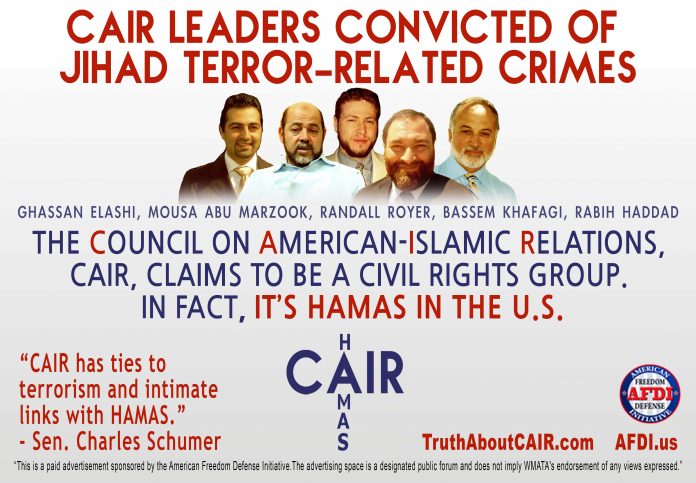 100% of Islamic Law (sharia) mandates warfare against non-muslims, and obliges stoning, crucifixion and beheading for certain crimes.  Islam’s prophet – a “beautiful pattern of conduct” for all muslims for all times – himself tortured, killed, took sex slaves, waged war on non-muslims, lied, and commanded war until the earth was under Islamic rule.  Yet, the President’s National Security Advisor, Herbert McMaster tells the public the actions of Al Qaeda and the Islamic State have nothing to do with Islam.

Presidents Clinton, Bush, and Obama all told the American people Islam is not a threat, but a peaceful religion.

They were wrong.  What they said is factually untrue and can never be true.

President Clinton’s Islamic Advisor, who also created the Muslim Chaplain Program for the Department of Defense and, as a “Goodwill Ambassador” for the State Department participated in the Middle East peace process on behalf of the United States, was actually a financier for Al Qaeda (Abdurahman Alamoudi), who is now in federal prison.

The U.S. government modeled the “Countering Violent Extremism” program after the British program of the same name which was handed to the Brits by the Muslim Brotherhood in the UK.  The FBI and DHS dragged that trojan horse into the U.S. national security apparatus, and put senior Muslim Brotherhood operatives in advisory roles across the government to implement it.

Members of Congress to include nearly all Democrats, as well as John McCain, Scott Brown, Marco Rubio, John Boehner, Paul Ryan and others have consistently failed to identify the threat from the Islamic Movement, and have attacked those who speak truth about it, like former Congresswoman Michele Bachmann. 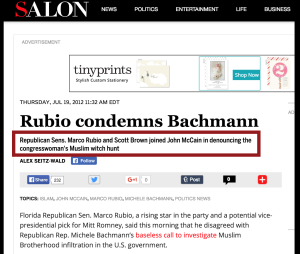 U.S. military generals and admirals created rules of engagement, policies on training, and wartime strategies all based on a counter-factual understanding of the enemy.  This is why the military’s “win the hearts and minds” crap got thousands of our men and women killed on the battlefield, frustrated our war-fighters, and got some of them put in jail for killing Al Qaeda jihadis outside the bounds of those same rules of engagement.

The FBI investigated:  the Boston Marathon bombers; the Orlando and San Bernadino jihadis; Abdulhakim Mujahid Muhammad, who killed Private Andy Long at a recruiting depot in Little Rock, Arkansas; the Ft Lauderdale jihadi; and so many others.  Yet in all of these cases, the FBI took no action to deter these attacks or kill/capture the men and women who perpetrated them before the attacks.

Why?  Because the U.S. federal government has catastrophically failed in its most basic duty:  to wield the sword and defend this nation and the the inalienable rights given to the American people by God.

We are at war and our government is certainly not acting like it.  They treat it like it is a crime spree.

In my time doing counter-jihad work, I have been physically threatened numerous times.  It is the nature of the business.  Just ask Geert Wilders, Robert Spencer, Pam Geller, and anyone else who speaks truth about Islam.

I have contacted my old employer, the FBI, many times and filed reports about threats to me from jihadis.  There has been zero follow up by the FBI.

2016 was the first time the FBI followed up on real threats against me.

The FBI’s Oklahoma office opened investigations on two specific threats against me in the fall of 2016.  One of the threats just happened to come immediately after I testified in the Oklahoma State House that  two muslim leaders sitting in the hearing room are jihadis.

They are:  Dr. Imam Imad Enchassi, the Imam of the Muslim Brotherhood’s Islamic Society of Greater Oklahoma City; and Adam Soltani, the leader of Hamas in Oklahoma doing business as the Council on American Islamic Relations (CAIR).

The FBI classified the case, so when they did not prosecute, state and local prosecutors could not use information because it was classified.  By the time the case was declassified, the subject of the investigation fled the country.  See an article here about this incident.

Here is the point:  The United States government has demonstrated since 9/11/01 it is not capable of protecting its citizens, primarily because it refuses to identify Islam/sharia as the doctrinal driver of the jihadis, organizations, and nation states waging war against the West.

Apparently, our leaders are also incapable of reading 1400 years of Islamic history or reading what America’s founders wrote about Islam and the threat it poses to Western civilization.

American leaders are still discussing nuanced strategies, outreach, and interfaith dialogue, while nations have been and are being overthrown, hundreds of thousands of Christians lay dead overseas, and Europe is being overrun by Islamic jihadis (sharia adherent muslims).

The U.S. Department of Justice and the Attorney General of the United States have shown no sign of taking any productive action.  No domestic plan has been formulated to strategically deal with this real threat.

The answer resides, as it always does, in the hands of the American citizens.

Citizens must work to ensure local police/sheriffs get smart on the threat and take action.  Citizens must positively support police in developing aggressive investigative strategies to identify jihadis and their organizations at the local level and shut them down.  Citizens must organize to meet this enemy along every line of operation the enemy has created to stop their forward progress.

This can be done.  It is why Understanding the Threat does what we do, and we are the only ones doing it.

Local media, businesses, and leaders who protect these terrorists/jihadis and minimize the threat, must pay for their actions.  There are local and state laws on the books for individuals (like reporters) aiding and abetting seditious actors and terrorists.  Businesses should be boycotted and shut down if they support jihadi organizations.  Local elected officials should be jailed for propagandizing for, defending, or providing material support to individuals and organizations working to overthrow the state and federal Constitutions.

Many states have RICO statutes which cover many of these violations of the law.  Mostly, Americans must stop being so tolerant of those who support enemies of this nation, and begin taking affirmative actions.

Speak truth boldly IN love and WITHOUT fear.

Get involved in your local school district, local politics, and with your local police and sheriff’s office.  Force them to learn this information and act on it to protect the community, or get new people in positions of authority who will.

Take the fight to the enemy.  Do not wait in a defensive posture.  Put freedom on the offensive where it belongs.

It is late August 1939 in Warsaw, Poland.  As the darkness grows, will you sit and wait or will you do your best to thin the enemy’s ranks here in the U.S. before the larger war begins?