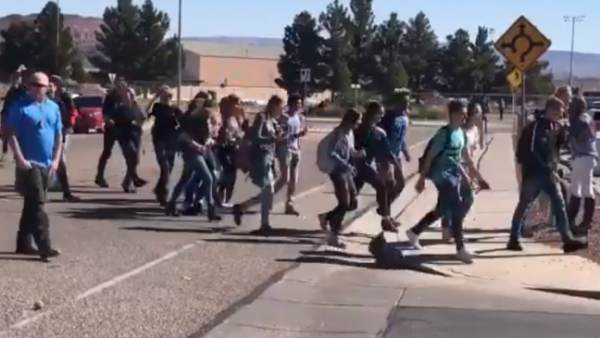 NEW: @sgcitypubsafety is charging the suspects “failed attempt to detonate a homemade explosive” inside Pine View High School yesterday with:

76-10-402: Manufacture, possession, sale, use or attempted use of a weapon of mass destruction prohibited.

Police said a homemade explosive device was the item discovered in a backpack at Pine View High School Monday, that forced the evacuation of the school. Police said if the device had detonated, it would have caused significant injury or death. Police have a suspect in custody.

A warrant served at the male juvenile’s home and items were found consistent with the materials used to build the device. Police also said the suspect had been researching information and expressing interest in ISIS and promoting the organization.

The boy has not been identified but police said he was attending a class at Pine View.

Updated Press Release for the Incident at Pine View High School March 5th, 2018: Yesterday, some extremely perceptive students at Pine View High School notified faculty and the School Resource Officer of a suspicious backpack that had smoke coming from it. From that initial investigation, it was determined that a homemade explosive device was inside the backpack. The school was evacuated. St. George Police, Washington County Bomb Squad, Washington County Sheriff’s Deputies, Jax, the bomb detecting K-9 for DRMC and his handler, Washington County School District and members of the FBI responded to Pine View High School to assist with the investigation. After examining the device, bomb squad members indicted that if it had detonated; the device had the potential to cause significant injury or death.

The device was disarmed and a suspect was identified. The suspect was a juvenile male attending a class at Pine View High School. A warrant was served on the residence of that juvenile and items were located that were consistent with the materials used to build the device placed at Pine View. Based on our investigation we can confirm this was a failed attempt to detonate a homemade explosive at the school. It was also determined that the male had been researching information and expressing interest in ISIS and promoting the organization.

The suspect was arrested and charged with 76-10-402: Manufacture, possession, sale, use or attempted use of a weapon of mass destruction prohibited. More charges may be pending, to include charges from Hurricane City Police Department from the criminal mischief incident at Hurricane High School on February 15th.

There were several factors that came into play yesterday which led to a positive outcome. First , we’d like to recognize and thank the students who notified faculty and the SRO of the suspicious backpack. Their immediate action played a large role in this incident ending with no injuries.

Second, the School Resource Officer program which allowed an officer to immediately be on scene to access and address the situation appropriately. He was then able to call in appropriate teams, such as; the Washington County Bomb Squad and Jax, the bomb detecting K-9 from Dixie Regional Medical Center, to identify and disarm the explosive device. We’d also like to say thank you to the Bomb Squad and to Jax and his handler for responding to the call out.

Third, the Washington County School District, who have implemented drills to practice for incidents such as this, which led to a quick and seamless evacuation of the school.

Finally, we’d like to thank the Washington County Sheriff’s Office and the FBI, who responded to assist with everything from the investigation itself to barricading roads.