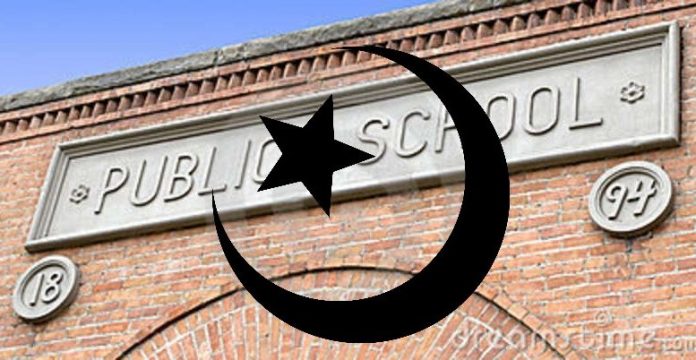 Fox News once reported that a Marine Corps father has been banished from his daughter’s school after he complained about her homework assignment on Islam. Kevin Wood said his daughter was ordered to write a three page essay about Islam’s five pillars, at La Plata High School in Maryland. He argued that students can’t study Christianity in school “but we can force-feed our kids Islam.”

When are we going to weed out the hypocrites in our government. This is One Nation Under God, not a Nation Under Islam. People have been attempting to remove God from our schools for decades. Today we have school boards that say it’s ok to teach Islam, and talk about Muhammad. A man who married a child at the age of six, and had sex with her when she was nine. That’s a good role model for our kids don’t you think. Our children are not allowed to pray to God in school, but they can write reports on Islam.

These hypocrites in our school system need to know they can’t have it both ways. If our children are not allowed to talk about Jesus then teachers should not be allowed to talk about Muhammad. If the teaching of God is not allowed in our schools, then there is no way you should ever allow the teaching of Satan. The separation of Church and State applies to everyone in this nation. God bless each and everyone of you, Shep #Marine4Truth…