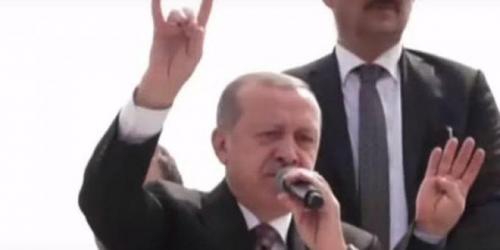 With the characteristic greeting gesture of Turkish ultranationalists and neo-fascists Grey Wolves, President Recep Tayyip Erdogan greeted the crowd at a meeting of his party AKP in Mersin, in South Turkey.

He recited also his favorite poem “One heart, one flag, one nation, one homeland.”

As KeepTalkingGreece.com reports, The Grey Wolves (Turkish: Bozkurtlar) is a Turkish ultranationalist organization with close links to to the Nationalist Movement Party (MHP) with which Erdogan has made an alliance ahead of the 2019 elections.

The characteristic hand sign used by Grey Wolves and MHP supporters represents a wolf head. In Turkish nationalist myth, the Turks originate from a wolf.

Next to Erdogan, a high-ranking official – maybe a minister? – had raised his hand in the Rabia sign, a gesture symbolizing the resistance of the Muslim Brotherhood to the Sisi regime in Egypt.

When the crowds began to shout at Erdogan to engage them in the military operaiton in Afrin, he told them

“When it is time to order the mobilization, I will join first and then all of you, because we believe in martyrdom,” he replied.

There is talk that the part of the MHP will challenge the alliance with Erdogan in the next elections. Cities in the south of Turkey were the first to vote for MHP when it gained power in the beginning of 2000’s.