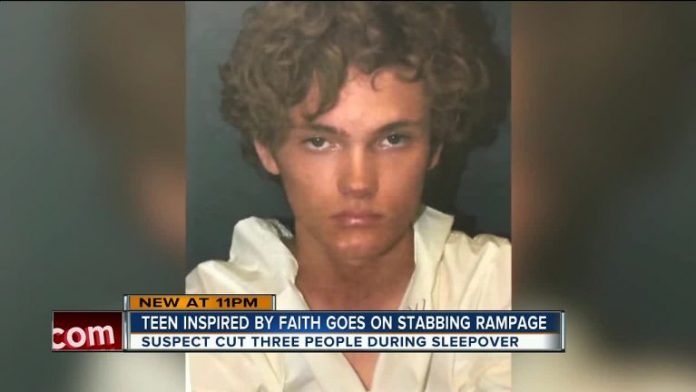 On March 12, 2018, 17 year old Corey Johnson, of Jupiter, Florida, spent the night at a friend’s house he knew for over 10 years named Kyle Bancroft.  Islam taught Corey it is his obligation to wage war – jihad – against non-muslims, and so he did.

Before arriving at the Kyle’s house, Corey bought a knife and brought it with him.  At around 4 AM, when he thought everyone was asleep, Corey killed Kyle’s little brother’s friend, Jovanni Brand, by stabbing him and slicing his throat.

When Kyle’s mother, Elaine Simon, went to investigate the noise, Corey stabbed her dozens of times and then stabbed Kyle’s little brother Dane 32 times when he tried to intervene.

Prior to the murder/attack, a sheriff’s detective interviewed Johnson for a mental-health assessment, and said he “sympathized with terrorist organizations.”

Corey told police he stabbed the victims because of his own Muslim faith, and that he read the Quran from his phone to give him the courage to commit the attack.

Corey certainly had numerous violent verses in the Quran to choose from:

“Fight and slay the unbeliever wherever you find them, besiege them, and lie in wait for them in each and every ambush.”  Koran 9:5.

As is the standard occurrence in cases like this, the FBI was notified Cory Johnson supported ISIS and had expressed his desire to join ISIS in January of 2017…16 months ago.

In March 2017, the FBI monitored his computer activity, and told Johnson to cease all social media activities related to ISIS and any other terrorist organizations.  Apparently, he was not intimidated.

Reportedly, by the summer of 2017, the FBI said Johnson was back to online posts.  According to the FBI, they had probable cause to charge Johnson federally, and were planning on getting an affidavit in the next few weeks.

Too little, too late.

Another dead American killed by another muslim in the name of Allah.

Like in the cases of Orlando, Fort Lauderdale, Boston, Little Rock, Minneapolis, Garland, and so many others, the FBI was investigating, took no aggressive action, failed to protect the citizens of this nation, and Americans are dead because of it.

Another Jihadi who committed murder in the name of Allah was Carlos Bledsoe, who changed his name to Abdulhakim Mujahid Muhammad.

Born into a Baptist family in Tennessee, Bledsoe/Muhammad was converted to Islam and drawn to jihad by the Muslim Brotherhood’s network, including the Islamic Center of Nashville, the Muslim Students Association, and others.

On June 1, 2009 Muhammad drove to the Little Rock U.S. Army recruiting center armed with three firearms, pulled in the parking lot, and began shooting at the soldiers standing outside.

Private Andy Long was killed, and Private Quinton Ezeagwula was wounded.  Muhammad advised he would have killed more soldiers if they had been in the parking lot.

Muhammad wrote a letter to Herb Wright Jr., a Pulaski County circuit judge while incarcerated after the 2009 killing and explained, “I wasn’t insane or post didn’t go as planned but was “justified according to Islamic Laws and the Islamic Religion.”  He calls himself a soldier and calls the shooting “a Jihadi Attack” in retribution for the killing of Muslims by American soldiers.

After this attack, Charles Jacobs of Americans for Peace and Tolerance conducted an investigation resulting in a documentary, Losing our Sons . This is a documentary of two families who lost a son.  The Long family lost a son – Andy – killed by jihadi Abdulhakim Mujahid Muhammad.  The Bledsoe family lost their son to Islam.  Muhammad’s family accused the Islamic Center of Nashville of turning their son into a jihadi. This documentary details how two families lost sons to Islam’s “way of Allah” – Jihad.

These two cases are similar in several ways.

These two men were simply following core teaches of Islam and Islam’s prophet Mohammad who commanded muslims to wage war against non-muslims, and exemplified this behavior by doing it himself dozens of times.

Islam is the threat. Sharia (Islamic law) is the enemy doctrine.

100% of Islamic sharia mandates warfare against non-muslims until the world is under Islamic rule (sharia).

When Americans are dead (AGAIN) because people in positions of authority with a duty to know this and who do not – ie ALL leaders at the FBI – U.S. law calls that “Criminal Negligence” and we put doctors and lawyers in jail for it.

It is time to apply this to all U.S. officials who continue to grossly and catastrophically fail in their duty to “know all enemies foreign and domestic,” and who are directly responsible for the deaths of American citizens.

What can YOU do?

Do not worry about “fixing” the FBI.  Learn the threat and know the threat.

Citizens must focus on getting local civic leaders, elected officials, pastors, sheriffs and police chiefs trained on this threat so they can identify the organizations in local communities turning young men like Corey Johnson, Carlos Bledsoe, and so many others into jihadis who are a threat to your neighborhood.

To do so, citizens and police must be trained.

PLEASE reach out to UTT so we can help you stop the flood of jihadis from killing in communities across this nation.

The Islamic State Threatens Jews in Israel and Abroad

The growing jihadist threat in Germany