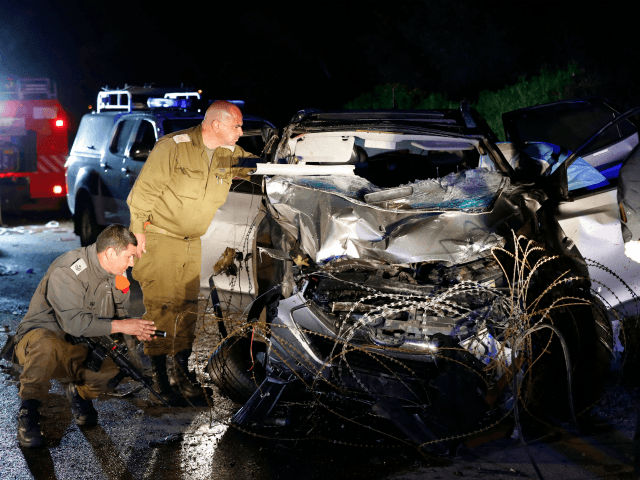 TEL AVIV – Palestinian terror groups have come out in praise of what they called a “heroic” West Bank car-ramming attack in which two IDF soldiers were killed on Friday afternoon.

Friday was yet another “day of rage” called by Palestinians in response to President Donald Trump’s December decision to recognize Jerusalem as the capital of Israel.

“This heroic and courageous operation underscores our people’s insistence on pursuing the path of resistance,” Hamas said in a statement released shortly after the attack.

Abdel Latif al-Qanua, a Hamas spokesperson, said that the “heroic operation underlines the vitality and continuity of the intifada, and our people’s rejection of the US decision on Jerusalem.”

Sami Abu Zuhri, a second spokesman, said that the attack was also a “message” to the Palestinian Authority.

“This is a message to the effect that the weapons of the resistance are the uppermost,” he added.

“It is also a message to the effect that there is no future for those who conduct security cooperation,” he said, referring to the cooperation between the PA and the IDF and the call for Hamas to hand over its weapons to PA control.

The Palestinian Islamic Jihad terror group described the attack as an answer to “Zionist terrorism” and called on Palestinians to plan more attacks to “foil the Zionist-American plot to obliterate the Palestinian cause.”

The Times of Israel quoted Talal Abu Zarifeh, a senior member of the Democratic Front for the Liberation of Palestine, saying that the car-ramming attack was a “natural response to Israeli crimes.”

The Popular Front for the Liberation of Palestine said that the attack “trampled Trump’s decision on Jerusalem – 100 days since he announced it.”

“The attack proves that the Palestinians are alert and prepared to thwart this decision and any other scheme targeting our cause and existence,” the group added.

The attack took place near the Mevo Dotan settlement in the West Bank. Capt. Ziv Daus, 21, from Azor, near Jaffa, and Sgt. Netanel Kahalani, 20, from Moshav Elyakim, were killed on impact.

Both received posthumous promotions, Daus to that of lieutenant while Kahalani earned the rank of sergeant.

The wounded soldiers were evacuated by helicopter to the Beilinson hospital in Petach Tikva. One suffered severe trauma to the head and is in serious condition. The other is in moderate condition, the IDF said.

Prime Minister Benjamin Netanyahu vowed Israel would demolish the home of the terrorist, 26-year-old Ala Qabha, who came from the village of Barta’a near Jenin.

Qabha confessed to carrying out the attack, the Shin Bet security service said. He did a U-turn and rammed his car into the soldiers standing outside their jeep, accelerating into them, eliminating any doubt that the attack was deliberate.

Qabha’s family, however, maintained that it was an accident.

“This isn’t the first car accident like this and won’t be the last,” his father Rateb Qabha told the Walla news site. “You hear about accidents like these every day in the news.”

When pressed as to why his son was already known to intelligence services and had even served a stint in an Israeli prison, Qabha said it was nothing and that he had only been “stone throwing or something like that.”

The Palestinian Authority has so far issued no condemnation of the attack.