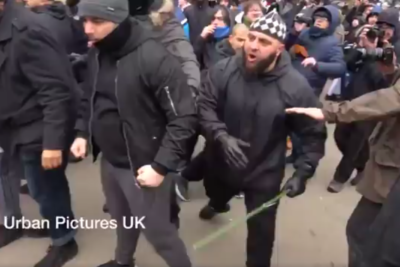 The religion of peaceniks stormed the last vestige of free speech in the UK, Speakers’ Corner, the one area where open-air public speaking, debate, and discussion are allowed. Or I should say was. The last corner of freedom in the UK isn’t, and the pretense that the UK is a free country is shattered.

Abdul Hamid and his devout friends assaulted people with weapons today in front of the police. Not one of them were arrested, but the real telling thing is to watch the police not put one hand on the rioting Muslim protestors, and instead manhandle the victims by continuously pushing them away from the aggressors……Two-tier policing in full view of the people. This is Britain in 2018. (source Tommy Robinson Facebook)

Voices of freedom are banned from entering the country. I have been banned along with Robert Spencer, Lauren Southern, Brittany Pettibone and Martin Sellner — all banned because our “presence in the UK is not conducive to the public good.” In other words, Muslims might get violent, so you see, the assassin’s veto prevails in the crippled and dying UK.

Tommy Robinson vowed to deliver Martin Sellner’s speech today at Speakers’ Corner after Sellner was banned from the UK. Sellner, an Austrian and prominent figure in Generation Identity, was due to make that speech in Speakers’ Corner in Hyde Park.

This bloke sums it up rather neatly:

This is my official statement about #SpeakersCorner and my decision to speak there today. pic.twitter.com/m6l2JE21tp