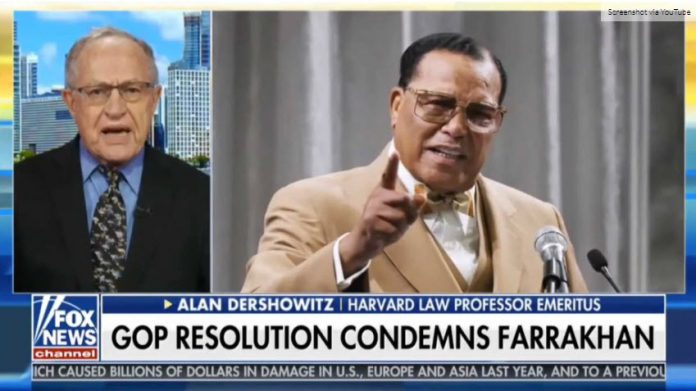 EARHARDT: Professor, there were eight Democrats in Congress that were linked to Farrakhan, and seen in pictures standing with him, taking meetings with him. So, many Republicans and Democrats said, you need to separate yourself from this guy. Three of them did. Three black members of Congress did, and now the Nation of Islam is calling them sellouts. Should more Democrats come out and say, you need to stop – you need to separate yourself from him. What’s your response to this?

DERSHOWITZ: Well, I think more than just separate themselves. I think Keith Ellison has to be fired immediately as deputy chairman of the DNC. Not only has he become close to Farrakhan, but he’s lied to the American public about ending his relationship with Farrakhan. We know that he continued to meet with Farrakhan even after he said he no longer met with him. This is the leadership of the Democratic Party. Farrakhan is a bigot; he is far worse than David Duke. Why? Because Farrakhan has a large following, and David Duke is a joke. He doesn’t have a large following; he has no influence on university campuses; he has no influence with any major segment of the American public – but we see that Farrakhan has continuing influence within the African American community at the very highest levels. That’s why he’s so much more dangerous, and he ought to be treated the way we treat David Duke. If any Republican dared to meet with David Duke, that would be the end of their career – it should be the end of the career of any Democrat who has any association with this bigot Farrakhan.

EARHARDT: Why does he have such a following when he says these kinds of remarks?

DERSHOWITZ: Because he also tries to help the black community. Hitler helped the communities in Germany as well. He ended unemployment; he helped inflation. Stalin – the same thing. Every bigot can claim to do some good. Even David Duke has said that look, he helps energize the American whites. That’s all nonsense. When you’re a bigot, you’re a bigot. And when you’re an anti-Semite, there can be zero tolerance for anti-Semitism.