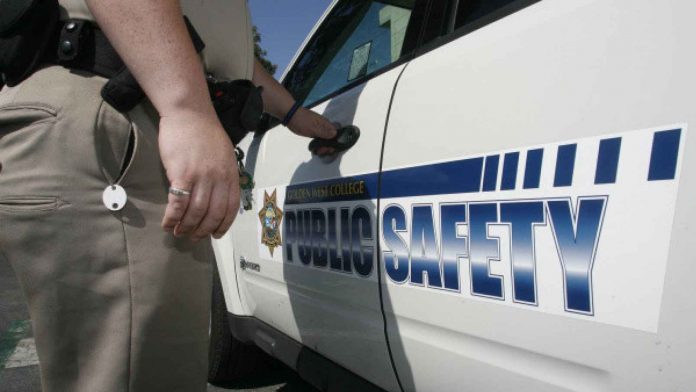 [Editor’s note: To help push back against the enforcement of Islamic blasphemy laws on the American campus, support the Freedom Center’s campaign Stop University Support for Terrorists.]

On March 14, I attended a public presentation entitled Islam 101 at Golden West College in Huntington Beach, California. The presenter was Nicole Bovey, a convert to Islam and public information officer at the Islamic Institute of Orange County in Anaheim. Bovey also works with the Muslim Speakers Bureau in Orange County (an arm of the Islamic Networks Group). The presentation was sponsored by GWC professors Kaine Fini (Anthropology) and Communications Professor Kristine Clancy (most of the audience members were her students, and this was part of her class.) The event had been advertised publicly, hence was open to the public. Altogether, there were approximately 50 people present. I videotaped the entire proceeding. The event was scheduled to run from 6:45-9:30 pm. As it was, it was cut off at about 8:30 by one of the professors (more about that later.) During the event, Professor Clancy called in campus police and she admonished a couple of the people in the audience who had asked pointed questions.

Ms. Bovey’s presentation was a very basic and very vanilla presentation of Islam, explaining what Islam is, what it means, who Muslims are, Muslims’ worldwide demographic breakdown etc. Bovey’s lesson plan, consisting of slides posted on the walls, was about subjects like the 5 pillars of Islam, daily prayers etc. She stated at the outset that she was there to clear up misconceptions about Islam. In fact, the first image on the wall was of a masked man representing a terrorist. Yet, it was clear later into the presentation that she was not going to get into areas like terrorism or Sharia law. She invited the audience members to raise their hands to ask questions at any point.

Bovey was doing fine handling soft, non-controversial questions, but plainly could not handle pointed, uncomfortable questions from a few members of the audience, including myself. One audience member identified himself as a former Muslim from Egypt, who left Islam and became a Christian pastor. When he began to contradict statements by Bovey, she became uncomfortable. Subsequently, he was approached by Prof. Clancy who asked him to step outside. He returned a few minutes later. While Bovey was discussing Zakat (Islamic charity giving), another audience member asked her about the categories of Zakat and whether any of them allowed giving to non-Muslims. She was unable to answer the question. Another man in the audience, a Muslim, stated that there was a separate channel of giving other than Zakat that could be directed to non-Muslims.

During Bovey’s description of Islamic daily prayers, I asked her about Sura 1, verses 1-7, from the Quran, which are recited in those daily prayers. I read verses 6-7 to her from an English language Koran that referred to those who had incurred Allah’s wrath and those who had lost their way. I mentioned that according to a hadith, one of Mohammad’s followers had asked who that referred to and Mohammad’s answer was that the former were the Jews and the latter Christians.  Bovey danced all around it stating that she didn’t know about that and that she had her own perception of who those people might be.

At one point, Bovey called for a 15-20 minute break because she and her AV assistant had to pray. At that point I turned my camera off and was looking at my cell phone when Professor Clancy began admonishing a couple of the men in the audience who had asked the above questions stating that this was her class. A campus police officer entered the room and a third staff member, International Student Program Director Melissa Lyon, asked a couple of them to step outside. One of the men had not even asked a question and eventually he was able to avoid going outside to talk to police. I captured most of this on my cell phone both inside the hall and outside. After talking with the police, the men were allowed to return.

Later on, Yet another audience member pointed out that modern archaeological studies had failed to identify Mecca as even existing during the time Mohammad was alive. Again, Bovey was unprepared. Professor Fini identified himself as an anthropological professor and responded that there were historical sites associated with Judaism and Christianity which could not be proven to exist during certain times, but that they were accepted as part of tradition.

I was called on for another question and asked Bovey about Hudud Sharia, the punishment section of Sharia law, specifically about the death penalty for apostates who criticized Islam, adulterers and homosexuals. Again her answer was evasive. She then asked me to stop videotaping saying that she feared I would edit it. I assured her I would not. I politely insisted that this was a public event in a public institution and that I had a right to videotape. This was affirmed by the aforementioned anthropology professor. (During the break I had occasion to talk to a campus police officer, and he affirmed my right to videotape.)

As other questioners steered the topic toward sensitive areas, Professor Lyon came racing to the rescue ending the event one hour before its scheduled time. It was pretty obvious that the conversation was going in a direction that Bovey and the professors did not want it to go.

It is clear that Bovey came prepared to give a “happy face” version of Islam to her audience. She was not prepared to deal with the obvious elephants in the room. Virtually every critical question was met with evasion.

Professors Clancy and Lyon completely overreacted to the questions to the point of calling in the campus copsand asking audience members to step outside. Whatever happened to free speech and the free exchange of ideas? There was absolutely no disruption whatsoever. Yet members of the audience were told that their questions were unacceptable. Since when?

And why did Ms. Lyon stop the event 60 minutes early? Because the speaker and her hosts were unwilling to engage in a discussion of aspects of Islam like Sharia law, draconian punishments, and terrorism.

Though the audience was mostly students and mostly members of Professor Clancy’s class, we (the aforementioned questioners) were not the only non-students in the audience. This event was announced to the public. That some chose to come and ask honest questions about Islam should be part of the protocol. Is that not what colleges are supposed to be engaged in? It was stated that Bovey wanted to explain “misconceptions” about Islam. Yet when asked to do so, she gave us tap dances and evasions while the professors tried to silence some of us — and then called the campus police to shut us down. Again, this was an event open to the public.

It is evident that all of these eerie developments clearly were a perfect lesson in Islam 101 — and in which happens to a free society once Sharia starts taking over.

Will we accept this laying down?

[1] The president of Golden West College is Wes Bryan. Contact him and ask why his institution is submitting to Islamic blasphemy laws:
Email: wbryan@gwc.cccd.edu.
Phone #: 714 895 8101.

[2] Golden West College is part of the Coast Community College District. They have a board of regents whose contact info can be found HERE.

[3] One of the audience members who was escorted out of this event by police and warned by them not to ask any more questions was Steve Amundson, the head of the Counter Jihad Coalition. Contact him if you want to help defend America from Jihad and Sharia:
Email: counterjihadcoalition@gmail.com.