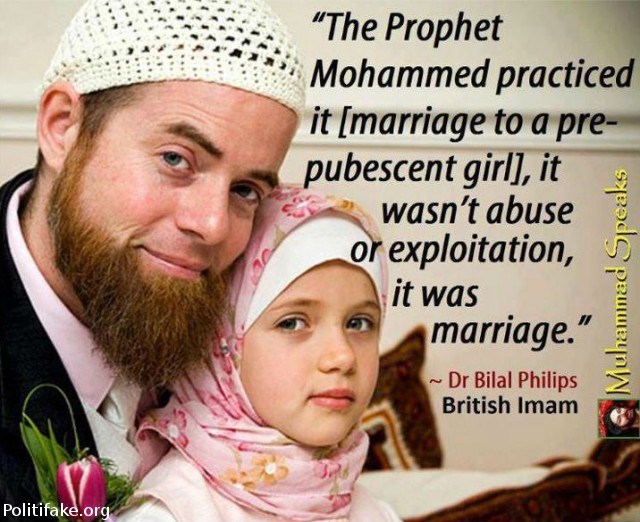 The recent death of a “child bride” in Turkey is yet another reminder of the plight of children forced to marry in Muslim societies.

Fifteen-year-old Derya B., who was living in the province of Bitlis in eastern Turkey, gave birth to her first child at home in early December, according to Turkish newspaper Haberturk. One week after the birth, she was hospitalized — ironically on October 11, the International Day of the Girl — due to a severe headache, nausea, and vomiting. She was held in the intensive care unit of the hospital for two days. Derya eventually died of a cerebral hemorrhage.

Derya had been married off to a relative in an “imam wedding” (a non-official, Islamic wedding) last year in Mutki, a village in Bitlis, when she was 14.

Dr. Aydan Biri, an expert in gynecology, told Haberturk that factors that increase maternal death can be direct or indirect:

The death of Derya constitutes indirect maternal death. It is dangerous for child brides to get pregnant. The death rate in adolescent pregnancies is higher. Blood pressure, premature birth, and early interventionist birth are commonplace in child pregnancies. And the pregnancies of children, whose body organs are not completely developed, end, more often, in death.

Derya is only one of the millions of victims of child marriages in the Muslim world. A total of 232,313 girls, aged 16 and 17, were married in Turkey between 2010 and 2015 alone, according to the official figures of the Turkish Ministry of Family and Social Policy.

Islamic tradition records that Muhammad, the founder of Islam, who is considered al-Insān al-Kāmil (the perfect human) and uswa hasana (an excellent model of conduct) by Muslims, married Aisha when she was 6 and consummated his marriage with her when she was 9.

As scholar Robert Spencer puts it:

Islamic apologists in the West routinely deny that Muhammad married a child or that Islamic law sanctions child marriage. In reality, few things are more abundantly attested in Islamic law than the permissibility of child marriage.

… make Muhammad’s example the basis of their laws regarding the legal marriageable age for girls.

Similarly, Umar ibn al-Khattab, the second caliph of Islam, married Umm Kulthum bint Ali, granddaughter of Muhammad and the daughter of Caliph Ali, when she was between 10 and 12 years old and he was around 47.

Related verses from the Koran also clearly advocate the practice, which has become a long-lasting tradition in many Muslim communities. In April 2011, the Bangladesh Mufti Fazlul Haque Amini declared that those trying to pass a law banning child marriage in that country were putting Muhammad in a bad light:

Banning child marriage will cause challenging the marriage of the holy prophet of Islam, [putting] the moral character of the prophet into controversy and challenge.

He added a threat:

Islam permits child marriage and it will not be tolerated if any ruler will ever try to touch this issue in the name of giving more rights to women.

The Mufti said that 200,000 jihadists were ready to sacrifice their lives for any law restricting child marriage.

First-cousin marriage is also lawful according to Islamic scriptures. Koranic verses 4:22-24 list all the categories of women that a Muslim cannot marry, which does not mention first cousins, and then declares: “Lawful to you are all others.”

Mohammad also married Zaynab bint Jahsh, who was his cousin. Zaynab was also the former wife of Zayd, Mohammed’s adopted son. Islam’s founder married Zaynab after Zayd divorced her. According to the Koran, Muhammad was commanded by Allah to marry Zaynab. Mohammed also married his daughter Fatima to his first cousin, Ali.

The website “islamtoday.net” notes the Islamic attitude to first-cousin marriages:

Allah has made marriage with first cousins lawful. There is no dispute about this in Islamic law. Anyone who wishes to dispute with this is placing his own religion in serious danger.

Scholar Hanan Hamamy explains the commonality of consanguineous marriages across the Muslim world:

It is estimated that one billion of the current global population live in communities with a preference for consanguineous marriage. Consanguineous marriage is traditional and respected in most communities of North Africa, the Middle East, and West Asia, where intra-familial unions collectively account for 20 to more than 50 percent of all marriages.

Consanguineous marriages are also practiced among emigrant communities from highly consanguineous countries and regions, such as Pakistan, Turkey, North Africa, and Lebanon, now resident in Europe, North America, and Australia.

Marriage between first cousins doubles the risk of children being born with birth defects, according to a study seeking answers to the higher-than-expected rates of deaths and congenital abnormalities in the babies of the Pakistani community.

According to a 2015 report from Pakistani newspaper Dawn:

For the past 40 years, almost every third home in the Mian Kalay village, which is situated some 30 kilometers south of Peshawar in Pakistan, has children suffering from birth defects. Disabilities range from blindness, cerebral palsy, mental disorders, thalassemia, physical deformities and hearing and speech impairments to name a few.

Doctors have termed generations of inter-family marriages in the village — which has 350 households — as the main cause behind birth defects in children. Dr Muhammad Ali, a District Health Officer (DHO) at Charsadda’s district hospital, says that first-cousin marriages result in children with genetic disorders. “Birth defects due to inter-family marriages is not just prevalent in Mian Kalay; this can happen anywhere in the world where there is inbreeding.”

A report by the Woodrow Wilson International Center for Scholars also states:

Child marriage, marriage to a virtual stranger, cousin marriage, and levirate marriage (the custom of obliging a widow to marry one of her late husband’s brothers, either as a first or as a plural wife) continue to be the norm in many parts of the Muslim world.

Sadly, all of these practices are deeply rooted in Islamic scriptures. But ironically, it is the critics of Islamic ideology, including outspoken former Muslims, who are accused of being “Islamophobes” or “anti-Muslim bigots.”

We criticize the misogynistic, intolerant, and violent aspects of Islamic texts and teachings because we do not want anyone — children, men, and women — to be victimized and devastated by this ideology.

We oppose Islamic rules and traditions that have so brutally and systematically destroyed human lives and civilizations for centuries.

If we did not see the enormously damaging and deadly results of Islamic culture and theology, we too would stay in our comfort zones and pretend as if millions of lives had not been destroyed by Muslims who live by the harshest interpretation of Islamic teachings.

It is not our hobby or favorite pastime to risk our lives or security by researching, writing, and speaking out against such Islamic practices. And we are not interested in “offending the feelings” of some Muslims. We do what we do because we care about the victims or the potential victims of this culture and its teachings.

Those who try to stifle free speech and the legitimate right to criticize Islam have abandoned and betrayed the millions of victims of Islamic ideology, including Muslims and non-Muslims.