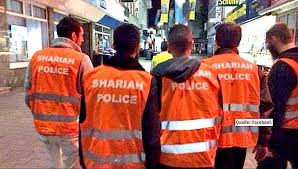 A hundred Islamists are now openly enforcing Sharia law on the streets of Berlin, according to local police who are investigating a recent string of violent assaults in the German capital.

The self-appointed morality police involve Salafists from Chechnya, a predominantly Sunni Muslim region in Russia. The vigilantes are using threats of violence to discourage Chechen migrants from integrating into German society; they are also promoting the establishment of a parallel Islamic legal system in Germany. German authorities appear unable to stop them.

The Sharia patrol came to public light in May 2017, when Chechen Salafists released a video warning other Chechens in Germany that those who fail to comply with Islamic law and adat, a traditional Chechen code of behavior, will be killed. The video’s existence was reported by Meduza, a Russian-language independent media organization based in Latvia. The video, which circulated through WhatsApp, an online messaging service, showed a hooded man aiming a pistol at the camera. Speaking in Chechen, he declared:

“Muslim brothers and sisters. Here, in Europe, certain Chechen women and men who look like women do unspeakable things. You know it; I know it; everybody knows it. This is why we hereby declare: For now, there are about 80 of us. More people are willing to join. Those who have lost their national identity, who flirt with men of other ethnic groups and marry them, Chechen women who have chosen the wrong path and those creatures who call themselves Chechen men — given half a chance, we will set all of them straight. Having sworn on the Koran, we go out onto the streets. This is our declaration of intent; do not say that you were not warned; do not say that you did not know. May Allah grant us peace and set our feet on the path towards justice.”

According to Meduza, the declaration was read by a representative of a Berlin-based gang of about one hundred members, headed by former henchmen of Dzhokhar Dudayev, the late Chechen separatist leader. All Berliners of Chechen origin who were interviewed by Meduza said they were aware of the gang’s existence.

The video surfaced after nude images of a 20-year-old Chechen woman who lives in Berlin were sent en masse from her stolen cellphone to every person on her contact list. Within an hour, the woman’s uncle demanded to speak with her parents. According to Meduza, they agreed to “resolve the issue” within the family by sending the woman back to Chechnya, where she would be killed to restore the family’s honor. German police intervened just hours before the woman was to board a plane bound for Russia.

After the woman was placed in protective police custody, her circumstance went from being a family issue to a communal one. According to Meduza, it is now the duty of any Chechen man, regardless of his ties to her or her family, to find and punish her. “It is none of their business, but it is an unwritten code of conduct,” said the woman, who has since cut her hair and now wears colored contact lenses in an effort to hide her identity. She said that she intends to change her name and undergo plastic surgery. “If you don’t change your name and your face, they will hunt you down and kill you,” she said. Although the woman graduated from a German high school, she hardly ever leaves her apartment because it is too dangerous. “I don’t want to be Chechen anymore,” she said.

According to Meduza, at least half of the population of single Chechen girls in Germany have enough compromising information on their cellphones to be considered guilty of violating adat:

“Associating with men of other nationalities, smoking, drinking alcohol, visiting hookah lounges, discotheques or even public swimming pools can cause communal wrath. A single photograph in a public WhatsApp chat can outcast an entire family and the rest of the community would be obliged to cease all communication with them. With everyone under suspicion and everyone responsible for one another, Chechen girls say they are sometimes approached by strangers in the street who chastise them for their appearance, including for wearing bright lipstick. The theft of a cellphone and the subsequent posting of compromising material is a hard blow; the dishonored person has no one to turn to and the one who posted the victim’s photos does not risk anything.”

Chechens interviewed by Meduza said that expectations for behavior are more rigid and strict in among Chechen emigrants in Germany than in Chechnya itself. This situation has been described as “a competition in righteousness” between Chechens living abroad and those in Chechnya who are loyal to Chechen leader Ramzan Kadyrov: each party is seeking to prove that they are the better Chechens, and threats of violence against “errant” women are viewed as “acts of patriotism.”

In one instance, a young Chechen woman was recorded on video while walking down a street in Berlin and conversing with a non-Chechen man. That same evening, a few dozen unknown Chechen men drove to her house in northern Berlin. The man she had been seen with was brutally beaten; almost all of his teeth were knocked out. The young woman managed to hide.

On July 4, the Berlin newspaper Tagesspiegel reported that several other women and men have been assaulted by the Sharia gang in recent weeks, and that the Berlin Criminal Police Office has now launched an investigation. A police spokesperson said that the investigation is being hampered by the fact that so far no victim has publicly dared to bring formal accusations against the gang. The victims are all, apparently, afraid of retribution.

According to Tagesspiegel, some members of the gang, which has grown to around a hundred members, are armed and many have combat experience from the Chechen wars with Russia. The gang members, who also come from Dagestan and Ingushetia, have attacked Muslims as well as non-Muslims, including Christian asylum seekers at migrant shelters in Berlin.

The gang is linked to several Salafist mosques in the German capital, including Fussilet 33, which once served as the headquarters of the so-called Berlin Caliphate. The mosque was shuttered by German authorities in February 2017, after they learned that Anis Amri, the Tunisian jihadist who carried out the suicide attack on a Berlin Christmas market, had sheltered there.

Around 60,000 Chechens live in Germany, according to official statistics, although the actual number is believed to be much higher. Nearly 40,000 Chechens have applied for asylum in Germany during just the past five years; many have crossed the border illegally from Poland.

An internal paper produced by the Federal Audit Office (Bundesrechnungshofes) revealed that “the majority of the unauthorized persons in Germany are Russian citizens of Chechen ethnicity, some of whom have been linked to the Islamic terrorist environment.”

The Chechen community in Germany is primarily based in Brandenburg and Berlin, where they are firmly entrenched in a parallel society. A social worker interviewed by Meduza said that the main obstacle to Chechen integration is their ultra-conservative moral code, the adat:

“They have come to Germany because they wanted to live in Germany, but they keep trying to turn it into Chechnya with its medieval ways. This inability and reluctance to integrate is extremely frustrating and typical of all migrants, not just Chechens. The only difference is that most other migrants come from the 20th century, not the times of feudalism.”

In an interview with Radio Berlin-Brandenburg, Maciej Falkowski, a Polish political scientist specializing in the Caucuses, said that many younger members of the Chechen diaspora are embracing radical Islam:

“The Chechen people are a very self-contained, homogenous nation. They resolve all problems among themselves. You will hardly find a Chechen, for example, who will seek remedy from a German court. Religion, of course, also plays an important role in the younger generation. Moreover, the Chechens have not had their own country for hundreds of years and therefore are not acquainted with the legal state (Rechtsstaat) in our sense of the concept.

“We are increasingly seeing a generational conflict among the Chechens. The elderly are rather skeptical of Salafism and radical Islam, while the younger ones are embracing it. They believe Salafism offers answers with regard to their identity. Here they find community and charismatic leaders. Salafism is now their dominant current.”

Heiko Homburg, an official at Ministry of the Interior of Brandenburg, the German federal state that encircles Berlin, said that most of the known Islamic extremists there are from Chechnya:

“Our problem in Brandenburg is that the Caucasian Emirate [a militant jihadist organization active in southwestern Russia], to which many Chechens feel committed, has submitted to the Islamic State. So, whether we want it or not, we have de facto Islamic State structures here in Brandenburg.”

German security officials estimate that 1,500 to 2,000 Chechens are currently fighting in Iraq and Syria. As the Islamic State nears its end, it is feared that many of those fighters will travel to Europe, through Ukraine and Poland with the help of pan-European, Chechen clan relations.

In Frankfurt (Oder), a German city on the border with Poland, police are warningthat Chechen migration is a ticking time bomb:

“We have a serious and ever-growing problem with radical Chechens who are constantly traveling back and forth across the German-Polish border. Their families are building Europe-wide structures which they are using to finance the Islamic State with the proceeds of organized crime. Everyone’s attention is fixed on the Syrians, but the Chechens are the most dangerous group. We are not paying sufficient attention to this.”

Soeren Kern is a Senior Fellow at the New York-based Gatestone Institute.