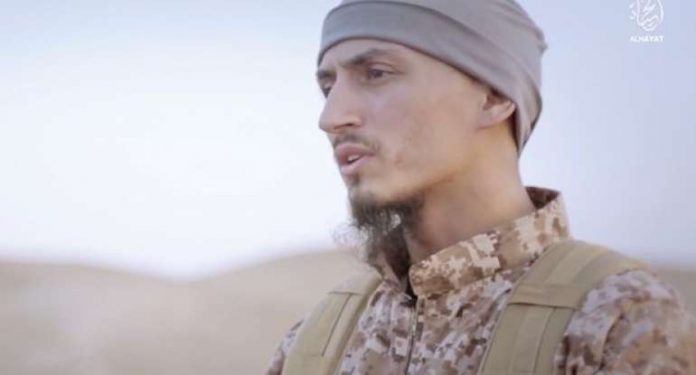 A pro-ISIS group that has been issuing a wave of graphic messages this year to instigate would-be jihadists in the West to commit attacks issued a new poster with the image of Bataclan killer Abu Qital al-Faransi and his exhortation to smash disbelievers’ heads with rocks.

The French terrorist who was part of the 2015 Paris attacks, real name Samy Amimour, recorded a video that was released two months after the coordinated attacks.

“And by Allah, we will fight you – with Allah’s permission – in the heart of Paris and at the corner of the Eiffel Tower,” Amimour vowed in the video.

He criticized those living in France who “claim to be Muslims” yet don’t fight.

“We are being killed every day and you are sitting there idly, living among them, sleeping among them, eating with them, with these disbelievers, while it is within your ability to display some honor and spit in their faces – if you can’t find a weapon – or smash their heads with a rock, or run them over with your car and terrorize them,” Amimour said.

The poster from the media group calling itself Muharar al-Ansar, distributed in online ISIS haunts including on Telegram, showed Amimour’s face and displayed his quotes, along with a declaration that “the Islamic State has emerged from the blood of the just” and a directive for Muslims in the West to “ANSWER THE CALL and join the caravan of martyrs.”

Earlier this month, Muharar al-Ansar released an image of Spain with the order to jihadists, “If you don’t have a gun, you have a truck or knife.”

This theme of using easily available weapons to inflict mass casualties has been reflected in other posters from the group, including a February picture of a white cargo truck like the one used in the Nice attack with the words, “Hit them with a truck. Kill them all.”

A few days before the vehicle attack poster, Muharar al-Ansar encouraged jihadists to “break the cross,” a message that was also delivered in Russian.

Another poster showed the White House in flames while urging would-be terrorists to attack with fire. The group has also issued posters suggesting attack sites in China and Russia.

In mid-February, Muharar al-Ansar distributed a “kill them all” poster encouraging a mass shooting in the style of the Oct. 1 Las Vegas massacre. With the shadow of the Mandalay Bay in the background, the poster called an AR-15 the “weapon of choice” with a target of “festivals and large gatherings.”

“Select a high place,” the message directed. “Therefore, you will have a greater angle of vision to direct the shots.”