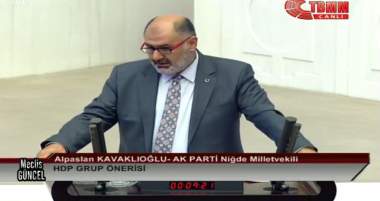 “Europe will be Muslim,” prominent Turkish official Alparslan Kavaklıoğlu recently proclaimed. In this he was echoing his president, Recep Tayyip Erdoğan, who said last year that Muslims “are the future of Europe.” Interestingly, Kavaklıoğlu also has much in common with German Chancellor Angela Merkel and the rest of the Old World’s establishment class, saying that his “biggest worry is that there is an explosion of micro-nationalism” on the continent. (Translation: The greatest concern is people who want to preserve their own culture.)

Kavaklıoğlu, an MP for the ruling Justice and Development Party (AKP) and the head of his parliament’s Security and Intelligence Commission, made his comments at a recent party affair and said (as translated by the Gatestone Institute):

The fortune and wealth of the world is moving from the West to the East. Europe is going through a time that is out of the ordinary. Its population is declining and aging. It has a very old population. So, people coming from outside get the jobs there. But Europe has this problem. All of the newcomers are Muslim. From Morocco, Tunisia, Algeria, Afghanistan, Pakistan, Iraq, Iran, Syria, and Turkey. Those who come from these places are Muslim. It is now at such a level that the most popular name in Brussels, Belgium is Mohammed. The second most popular name is Melih [Malih] and the third one is Ayşe [Aisha].

Note, “Aisha” is the name of the young girl — said by some sources to have been nine years old — who Islam’s prophet, Mohammed, took as a wife.

Kavaklıoğlu then went on to boldly predict that, relates Gatestone,

The Muslim population will outnumber the Christian population in Europe. This … has increased the nationalistic, xenophobic and anti-Islam rhetoric there. Hence, marginal, small parties have started to get large numbers of votes…. But there is no remedy for it. Europe will be Muslim. We will be effective there, Allah willing. I am sure of that.

While it’s probably only correct to say that the “wealth of the world is moving … to the East” if you mean the Far East, Kavaklıoğlu was otherwise just stating fact. Western nations have long been plagued by fertility rates below replacement level (2.1 children per woman) and the resulting native-population decline. In fact, a recent demographics projection determined that in the United States, the elderly will outnumber children by 2030 for the first time in history. In worse shape still are parts of Spain and Italy, where the fertility rate is less than 1.0 — this reflects a civilizational death spiral.

This Western “demographic winter” is used as a pretext for culture-rending (im)migration, the excuse being that we “need workers.” Yet the open secret is that with robots poised to displace much of the workforce, we have a better chance to ultimately face not a dearth but a glut of workers — and unprecedented unemployment.

Of course, Kavaklıoğlu was referencing the “Islamization” of the West, a topic that brings charges of “racism” and xenophobia when actually broached by Westerners. Consider legendary actress Brigitte Bardot. Just recently she lamented that the prevalence of burkas in France is “unacceptable” and that Islamists are “practically everywhere.” She also said, “I did not fight against French Algeria to accept an Algerian France[.] I do not touch the culture, the identity and the customs of others[;] let’s not touch mine,” reported RT.com. Yet she was touched by the law for making such comments in the past, having been convicted of “hate speech” at least five times.

Bardot had just joined, however, the long list of punished dissenters who depart from the multiculturalist program. This Western world slouching toward Mecca, this rolling out of a red prayer rug, is one reason why late Libyan leader Moammar Gadhafi stated in 2006, “We have 50 million Muslims in Europe. There are signs that Allah will grant Islam victory in Europe — without swords, without guns, without conquest — will turn it into a Muslim continent within a few decades.” It’s why President Erdoğan told Turks in Europe last year, “Have five children, not three. You are Europe’s future.”

Erdoğan’s attitude may reflect how he has, some say, dreams of restoring the Ottoman Empire, the former Turkish realm that was the world’s last great caliphate and which twice reached the gates of Vienna. Kavaklıoğlu appeared to allude to this as well, mind you (though I’m relying on a Google translation here), saying in his recent talk that his party’s endeavors have made the Ottomans a force to once again be feared.

Also singing this tune — though as a sounded alarm — is Jordanian opposition leader and practicing Muslim Dr. Mudar Zahran. In a 2015 interview (video below), he characterized the recent Muslim wave migrations into Europe as “the soft Islamic conquest of the West.” He also revealed, “I have to be honest, you read Arab magazines and Arab newspapers [and] they are talking about, ‘Good job! Now we’re going to conquest [sic] Europe.’ So it’s not even a secret.”

Yet this is truly a case of how “We have met the enemy and he is us,” as cartoonist Walt Kelly put it. Italian Monsignor Carlo Liberati certainly understands this, stating in a 2017 interview that in 10 years “we will all be Muslims not because of Islam, but because of our stupidity.” Liberati was, at best, indulging hyperbole with his time frame. But his warning was otherwise spot on.

Faced with increasing balkanization and social unrest, sterile Western pseudo-elites’ response has been to double-down on the political correctness. Just consider the following partial list of efforts to stifle nationalist and anti-Islamization dissent:

• A 65-year-old Swedish woman currently faces hate-speech charges and possible prison time, and was harassed by the police, for inveighing against Muslim migration.

• Britain has banned even sober critics of Islam from entering the country. Not only have Jihad Watch proprietor Robert Spencer (not to be confused with Richard Spencer) and anti-jihadist crusader Pamela Geller been victimized, but Lutz Bachmann, founder of anti-Islamization group PEGIDA, has just joined them. Even milder critics of Islam such as radio host Michael Savage and, just recently, 22-year-old Canadian conservative Lauren Southern, have been banned.

• U.K. authorities ignored — and put the blame on — Muslim rape-gang victims for 15 years owing to political correctness. Now it comes out that police told at least one of them “not to mention the ethnicity of her rapists,” reported Breitbart.

• Germany approved a plan to fine companies such as Facebook $53 million for social-media posts that are “hateful” — often a euphemism for having an anti-jihadist quality.

• In some parts of Europe, homes have been raided and people arrested for posting anti-jihadist sentiments online.

Even Chancellor Merkel alluded to Islamization recently, when she finally admitted that no-go zones — European areas where civil law has been at least partially supplanted by Sharia law and where authorities hesitate to enter — do in fact exist.

This has caused some to wonder for how long “Europe,” in the sense of actually being European, will exist. As pundit Mark Steyn asked in 2014, “Can the developed world get more Muslim in its demographic character without becoming more Muslim in its political character?” And will “there always be an England if there are hardly any Englishmen left in it?”

Alluding to the West’s birth dearth, Steyn later answered his own question: “The future belongs to those who show up for it.” No doubt. And the future could come sooner than many think if Westerners won’t even show up to defend their own culture.