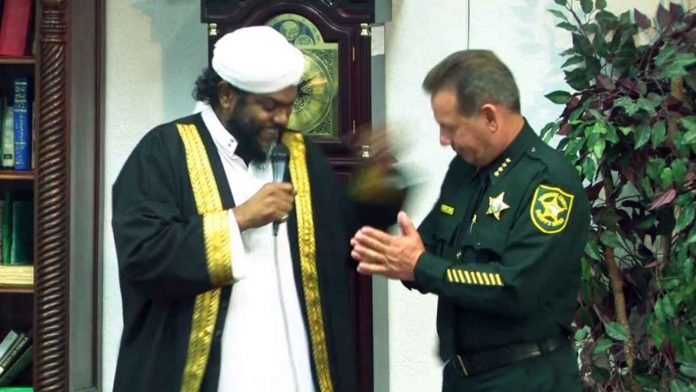 Scott Israel’s opponent for Broward County Sheriff tells Big League Politics that he fought for years to expose Israel’s connections to the Muslim community and the downside of the “Promise” program that many believe led to Nikolas Cruz’s uninterrupted shooting rampage.

“Since Scott Israel seems to be un-concerned about law enforcement, if I had been smarter I would have seen something coming,” David Rosenthal tells Big League Politics. Rosenthal has been smeared in local media as an Islamaphobic bigot while Israel, a prominent friend of Hillary Clinton and other Democrats, has been celebrated.

David Rosenthal says he first decided to run for sheriff in 2015 after Israel hired Nezar Hamze, a controversial Muslim deputy to Israel. As we reported, Hamze spoke Arabic at a Muslim meeting alongside Israel and pledged to the crowd that Israel told him to put God first and the community third. Israel boasted that his goal is to keep young people out of jail, and to put young people in a program where they would be monitored. Nikolas Cruz, obviously, was in that program.

“We sent him detailed letters for 2 weeks. He never responded,” Rosenthal says, referring to complaints about Nezar Hamze that he sent to Israel. Rosenthal then sent more than 200 letters to other politicians and law enforcement officials, which were ignored.

“The term phobia denotes an irrational fear or hatred of something. My hatred of Islam is based on rational conclusions,” Rosenthal said. “I began to learn about Islam in 2006, and I spent three years discussing a variety of issues and doing research. As far as I can see, Islam is diametrically opposed to the Constitution. Islam calls for a series of acts classified as unlawful under our series of laws and it glorifies behavior that is violent and perverse. Since 2001, and it could be argued for centuries, Islamic clerics have been calling for the conquest of all capitals of the world under Sharia law, and a lot of Islamic clerics have called for the destruction of America. We see what Islamic invasion has done in Western Europe. In Sweden, women can’t go out by themselves due to Muslim rape gangs that are terrorizing the country. The FBI obtained a Muslim Brotherhood document, their blueprint, which maps out their plan for the destruction of Western Society and the United States.”

“I’ve read a variety of contradictory reports about why the deputies didn’t go in, was it only Scot Peterson or were there additional 3 deputies present,” Rosenthal says of the shooting. “I’m not really sure what happened. Somebody knows what the orders were.”

Rosenthal is serious about knocking Israel out of office in 2020 and he believes that President Obama’s Promise program is unlawful.

“I’ve been persistent at it, a lot of people have told me they will support me. I have to hope, I have to do what I have to do and hope that it will have a positive impact. Here in Broward County we don’t seem to have as much political activism as there is in Miami-Dade and Palm Beach, part of the challenge is getting people to respond to this kind of problem, it’s in their self-interest to do something and get them to respond. It’s not only the sheriff, it’s the sheriff, the police chiefs, the general counsels, to a lesser degree the school resource officers who were just following orders,” Rosenthal said.

“The state attorneys must be aware of it, the attorney general must be aware, it’s not the kind of thing you can implement. The terms of this [Promise Program] agreement are clearly unlawful, the Promise Program, in order to create that program locally laws had to be broken, officials do not have the delegated power to agree to break the law, it’s an ongoing official criminal conspiracy,” Rosenthal said.

A video has surfaced of Broward County Sheriff Scott Israel attending a meeting of Muslims, where both Israel and one of his deputies spoke in Arabic. The deputy said that Israel pledged to keep young people out of jail and to put “God first, your family second and the community third.”

“I want to testify before you brothers and sisters because it’s important for you to hear from us,” the deputy Nezar Hamze said before speaking Arabic in the July 2015 Darul Uhloom meeting.