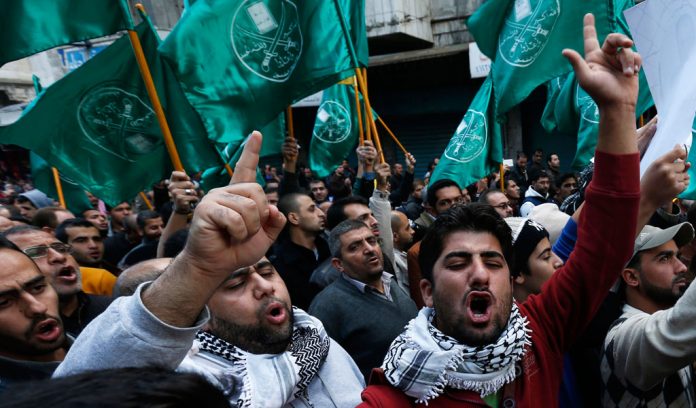 The Muslim Brotherhood’s sigh of relief after being rescued by Secretary of State Tillerson and National Security Adviser McMaster has been replaced by a sweaty panic.

With Tillerson out and Pompeo in and McMaster’s days numbered, it is now probable that the Muslim Brotherhood will finally be designated by the State Department as a Foreign Terrorist Organization, paving the way for its infrastructure in America to begin being dismantled.

Groups associated with the Muslim Brotherhood network like the Jamaat-e-Islami and Jamaat ul-Fuqra are likely to see a similar fate. President Trump’s desire to pressure Pakistan and more closely ally with India adds to the likelihood that these Pakistani-led groups will be blacklisted.

The newest version of the legislation is backed by 75 members of the House of Representatives and the Senate version introduced by Senator Ted Cruz has 4 cosponsors.

Now, most of the Trump Administration’s top officials are staunch foes of the Brotherhood, including:

It is almost universally reported that National Security Adviser McMaster is about to be replaced, despite Trump’s denials (just like his denials before Tillerson was fired).

The leading candidate for his job is former U.N. Ambassador John Bolton, another known supporter of FTO designation for the Brotherhood.

Trump’s pick for CIA Director, Gina Haspel, is presumably on the same page because Pompeo recommended her. However, she is expected to have a fight ahead of her to get confirmed by the Senate.

U.N. Ambassador Nikki Haley’s position is not known. She previously struck a neutral tone when asked about designating the Brotherhood, stopping short of defending Tillerson and McMaster’s known positions at the time, saying, “That is not something that has been discussed within the administration.”

Outside of the White House, President Trump is back to consulting with his former Deputy Assistant Dr. Sebastian Gorka, a passionate voice for designating the Brotherhood as an FTO.

Pompeo’s appointment represents a stunning reversal of fortune for the Muslim Brotherhood, which previously succeeded in getting plans for such a designation shelved. One Brotherhood official said the Islamist group had spent $5 million to lobby officials and influence the media. Brotherhood apologists even succeeded in influencing CIA assessments that conveniently leaked to the media.

The Brotherhood also deployed its defenders to Washington, D.C. and Qatar went on a spending bingehiring lobbyists, particularly those with close ties to the Trump campaign and the ability to influence Jewish Americans.

Qatar even managed to seduce a former senior staffer to Senator Ted Cruz—the very man who introduced the Senate version of the Muslim Brotherhood Terrorist Designation Act—with a contract for $50,000 per month. Even President Trump reversed course on Qatar.

The Council on American-Islamic Relations (CAIR), identified by the Justice Department as an “entity” of the Muslim Brotherhood, is fighting tooth and nail to stop Pompeo from getting confirmed by the Senate. One of the favorite tactics of the Brotherhood, especially CAIR, is deception.

CAIR has predictably labeled Pompeo as an “Islamophobe,” even though he empowered a convert to Sunni Islam at the CIA to fight Al-Qaeda and Iran. Its factsheet uses out-of-context quotes to paint Pompeo as an extremist, while CAIR paints the Brotherhood as “moderate.”

The terror-funding trial of the Holy Land Foundation proved, in detail, that the Brotherhood’s international leadership runs a Hamas support network on American soil.

The Yemeni Muslim Brotherhood has long been intertwined with Al-Qaeda, just like the Libyan and Syrian branches. The Jordanian branch is essentially a single unit with Hamas. The biggest resistance is in regards to the Egyptian wing, the birthplace of the Brotherhood.

Investigator Patrick Poole’s three-part interview with a former senior Egyptian counterterrorism official connects the dots between the Brotherhood and the terrorists it claims are “rogues” that it should not be held accountable for.

Failing a blanket designation of the Brotherhood, an alternative approach would be to designate several Brotherhood branches where the group’s connection to terrorism is clearer. This approach would meet less political resistance.

The changes within the Trump Administration indicate that the Muslim Brotherhood’s day of reckoning is finally near.