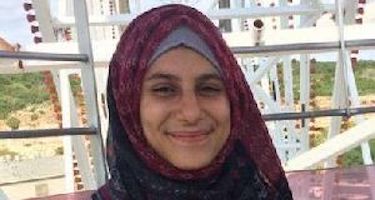 First reported here, the initial missing person report raised numerous red flags for those of us engaged in this work. The fact that Maarib al-Hishmawi survived is nothing short of a miracle.

This young girl was brave and endured daily tortures by her devout parents. What is not known is the significant number of Muslim girls living terrorized lives here in the U.S.

The feminist #metoo movement is deafening, violently silent, as is their leader, sharia adherent/promoter Linda Sarsour. She is a supporter of arranged marriages (she’s in one, as well).

These desperate young women have nowhere to turn. If you or someone you know is in need of help, please contact me americanfreedomdefense@aol.com or contact our sister org, Former Muslims United.

On Maarib al-Hishmawi’s 16th birthday, her father deposited $20,000 into his bank account — part of a payment for agreeing to his daughter marrying a 28-year-old suitor, according to court records.
The suitor, Mohammad al-Taie, who lives outside San Antonio, already had offered her gold jewelry and gold bars in exchange for her hand in marriage, the documents state.

Instead, the San Antonio teen refused — leading to more than six months of almost daily abuse, including a beating that left her with a 2-inch gash and a choking that almost left her unconscious, according to court records.

According to a search warrant from the Bexar County Sheriff’s Office, the al-Hishmawis regularly beat Maarib with broom handles and mop handles. On one occasion, she was beaten with a Swiffer broom after her father discovered that she had been using Snapchat, the records state.

The beating left her with the 2-inch cut on her arm, which required hospitalization, according to the warrant.

Before she was treated, Abdulah al-Hishmawi instructed his daughter “to tell the doctors that she cut herself while cutting a watermelon,” according to the warrant. Otherwise, he “would be arrested.”

On another occasion, Abdulah al-Hishmawi allegedly choked Maarib until she almost lost consciousness.

“She could not breathe anymore, she could not see anymore and was seeing colors,” the warrant says.

Hamdiyah al-Hishmawi threw hot cooking oil on Maarib’s hand and legs, leaving visible scars, the documents state. That was after Maarib told her mother that she wouldn’t marry al-Taie, 28.

Maarib “was told that she would marry al-Taie after she turned 16 because that is the youngest a child can legally get married in Texas,” the affidavit says.

In recent years, Texas has tried to crack down on child marriage. In May, Gov. Greg Abbott approved legislation that bans anyone under 16 from marrying. The law, which went into effect Sept. 1, also requires anyone under 18 to get a judge’s consent before marrying.