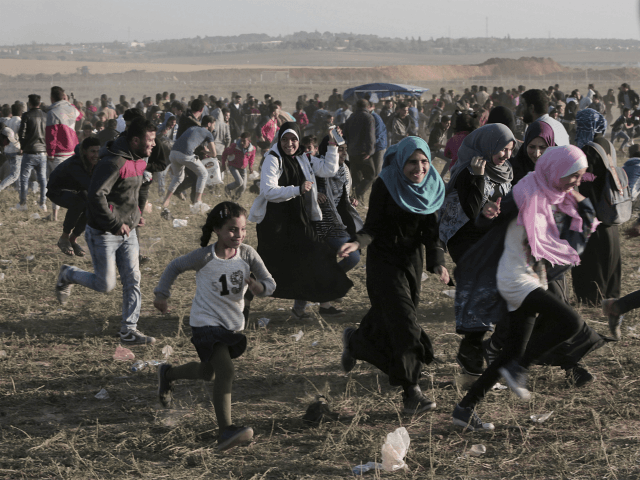 TEL AVIV – The Hamas terror group sent a seven-year-old girl to the Gaza security fence during violent riots on Friday, the IDF said.

“When the IDF troops realized it was a girl, they picked her up and made sure that she could get back to her parents safely,” the army said.

“Hamas cynically uses women and children, sending them to the fence and endangering their lives,” the statement continued.

The IDF’s Arabic spokesperson Lt. Col. Avichay Adraee told Gazans that Hamas was exploiting them by “putting them in danger.”

“Hamas is using you and distracting your attention from its responsibility to take care of you and govern the Gaza Strip. Hamas is sacrificing you to move forward with useless agendas and wasting millions instead of investing in your well-being,” wrote Adraee on Twitter.

“Don’t let Hamas use you! Don’t put yourselves in danger for nothing. You deserve a better future than what Hamas has planned! You deserve more than a reality of violence, incitement and terrorism,” he added.

Sixteen Palestinians were killed during the clashes, at least 10 of whom were identified as members of terror groups, the IDF said Saturday.

The army published a list of the terrorists along with their positions in various terror groups – with eight coming from Hamas. The riots saw rocks and Molotov cocktails hurled at Israeli soldiers along the border by a crowd of some 30,000 Gazans attempting to storm the fence. There was an instance of live fire as one rioter shot at the troops.

The “March of the Return” was initially billed as a “non-violent” protest that organizers promised would take place a half-mile away from the border fence, with no attempts to breach it. T

The IDF responded mainly with tear gas and rubber bullets, and only rioters who explicitly used violence against troops or were seen damaging or breaching the security fence were targeted with live fire, the army said.

Some of the terrorists who were killed were said to have attempted to place bombs along the security fence.

IDF Spokesman Brig. Gen. Ronen Manelis said on Saturday that there had been “a violent, terrorist demonstration at six points” along the fence.

Manelis added that Israel “will not allow a massive breach of the fence into Israeli territory” and added that if violence continues, “we will not be able to continue limiting our activity to the fence area and will act against these terror organizations in other places too.”

Friday’s “day of rage” coincided with both Passover eve and Palestinian Land Day, which marks events in 1976 that reflect the Palestinians’ struggle to own the land. The protest will be ongoing until May 15’s Nakba Day – the day of “catastrophe” that marks the establishment of the State of Israel.