The Israeli military was on high alert Sunday morning along the border of the Gaza Strip in anticipation of renewed clashes with Palestinian protesters.

Sixteen demonstrators were killed by Israeli fire on Friday, 10 of them members of Palestinian terror groups, according to the Israel Defense Forces.

Though the crowds had thinned and the fighting appeared to subside by Saturday, the army was expecting the Hamas terrorist group to inflame border tensions and set off additional violence, Hadashot news reported. 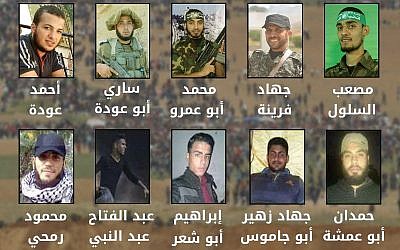 Fatalities from the March 30 violence on the Israel-Gaza border identified by the IDF as members of terror groups. (Israel Defense Forces)

The army also remained concerned that Palestinian terror groups could fire rockets at southern Israel, the TV report said. An army spokesman had originally raised that fear on Friday evening.

On Friday, some 30,000 Palestinians took part in demonstrations along the Gaza border, during which rioters threw rocks and firebombs at Israeli troops on the other side of the fence, burned tires and scrap wood, sought to breach and damage the security fence, and in one case opened fire at Israeli soldiers.

The army said that its sharpshooters targeted only those taking explicit violent action against Israeli troops or trying to break through or damage the security fence. Video footage showed that in one case a rioter, whom the army included in its list of Hamas members, appeared to be shot while running away from the border. The army in response accused Hamas of editing and/or fabricating its videos.

The army on Saturday night identified 10 of the 16 people reported killed during violent protests along the Gaza security fence as members of Palestinian terrorist groups, and published a list of their names and positions in the organizations.

According to the Israel Defense Forces (Arabic link), eight of the men killed were members of Hamas, which rules the Gaza Strip. One served in the al-Aqsa Martyrs’ Brigades, and another was affiliated with “global jihad,” it said, apparently referring to one of the Salafist groups in Gaza.

Earlier on Saturday, Hamas publicly acknowledged that five members of its military wing, the Izz ad-Din al-Qassam Brigades, were among the fatalities. 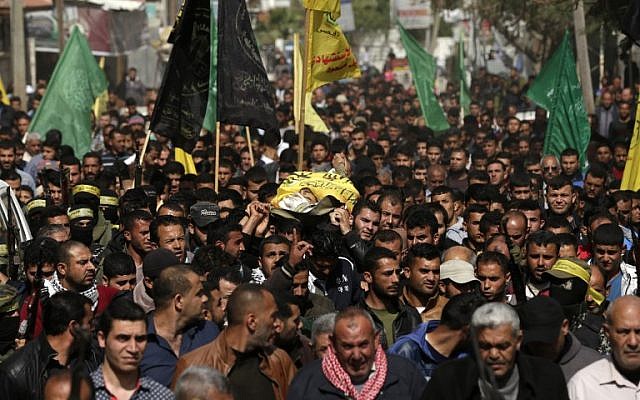 Palestinians carry the body of Hamdan Abu Amsha, said killed a day earlier by Israeli fire during a mass border protest along the security fence, in Beit Hanoun in the northern of Gaza Strip, on March 31, 2018. (AFP/ MAHMUD HAMS)

The army said that at least one of the Hamas members, Sari Abu Odeh, was part of the group’s elite Nukhba force and that another, Muhammad Abu Amro, served in its tunnel operations. (The IDF’s Arabic spokesman provided more details in Arabic via Twitter.)

The IDF identified one of the two Hamas members who shot at Israeli soldiers on Friday evening and attempted to breach the security fence, before they were shot dead, as 23-year-old Mussa’b al-Saloul.

Palestinian media reported that the bodies of the two gunmen were captured by Israeli soldiers. The IDF would not officially comment on this claim.

The oldest operative identified was Jihad Farina, 35, a company commander in Hamas’s military wing; the youngest was 19-year-old Ahmad Odeh, who served in the terror group’s Shati Battalion, the army said.

Hamas claimed those killed were taking part “in popular events side-by-side with their people.”

The army did not provide evidence for its identifications. Some could be independently verified with photographic evidence of the operatives wearing uniforms or receiving a military-style funeral from the terror group in question. Others could not be immediately substantiated.

Thousands attended funerals in Gaza Saturday for 14 of those killed — two were buried on Friday — with mourners holding Palestinian flags and some chanting “revenge” and firing into the air.

“Where are you, Arabs? Where are you, Muslims?” mourners chanted at one funeral, calling on the Arab and Muslim world to intervene. A general strike was held in both the Gaza Strip and the West Bank.

IDF Spokesman Brig. Gen. Ronen Manelis said on Saturday that all those killed were engaged in violence, adding that Gaza health officials exaggerated the number of those wounded and that several dozen at most were injured by live fire while the rest were merely shaken up by tear gas and other riot dispersal means.

Manelis said on Friday evening that the army had faced “a violent, terrorist demonstration at six points” along the fence. He said the IDF used “pinpoint fire” wherever there were attempts to breach or damage the security fence. “All the fatalities were aged 18-30, several of the fatalities were known to us, and at least two of them were members of Hamas commando forces,” he said.

The Palestinians’ march to Gaza’s border with Israel on Friday was the largest such demonstration in recent memory, calling for Palestinians to be allowed to return to land that their ancestors fled from in the 1948 War of Independence. It was dubbed the “March of Return.” 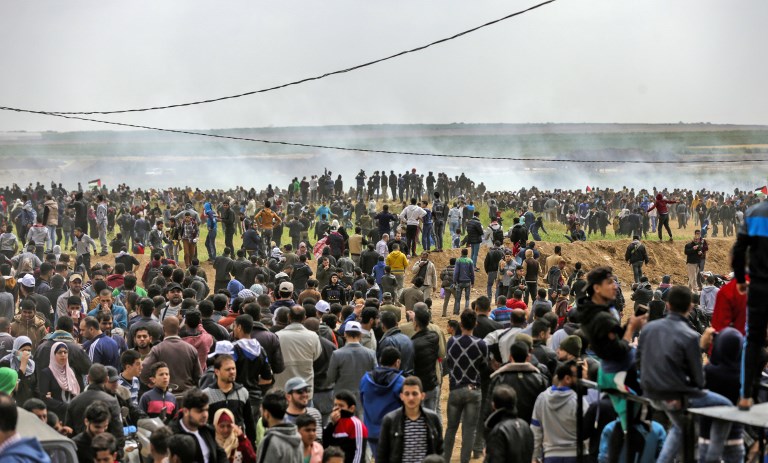 A picture taken on March 30, 2018 shows Palestinians taking part in a demonstration commemorating Land Day near the border with Israel east of Gaza City. (AFP/Mahmud Hams)

The death toll from Friday’s protest was provided by the Hamas-run Gaza Health Ministry, which also added that some 1,400 Palestinians were injured during the protests, over half by live rounds. Israeli authorities have no way to independently confirm the casualty reports.

Manelis warned Saturday that if violence drags on along the Gaza border, Israel will expand its reaction to strike the terrorists behind it. The military has thus far restricted its response to those trying to breach its border, but if attacks continue it will go after terrorists “in other places, too,” he said.

Manelis reiterated that Israel “will not allow a massive breach of the fence into Israeli territory.”

He said that Hamas and other Gaza terror groups were using protests as a cover for staging attacks. If violence continues, “we will not be able to continue limiting our activity to the fence area and will act against these terror organizations in other places too,” he said.

Hamas is an Islamist terror group that seeks to destroy Israel. It seized control of Gaza from Mahmoud Abbas’s Fatah in a violent coup in 2007. 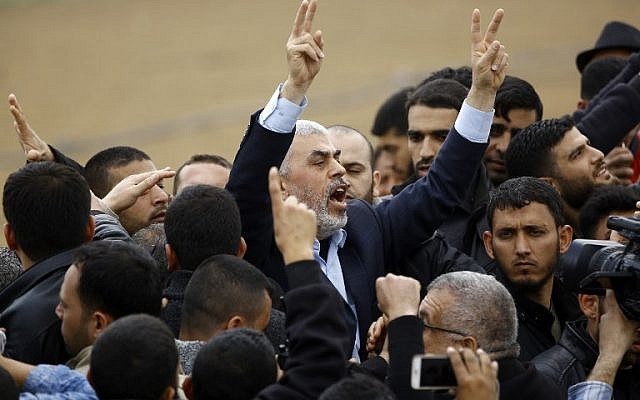 Protest organizers have said mass marches would continue until May 15, the 70th anniversary of the establishment of the State of Israel. Palestinians mark that date as their “nakba,” or catastrophe, when hundreds of thousands left or were forced to leave during the 1948 War of Independence. The vast majority of Gaza’s two million people are their descendants.

At previous peace talks, the Palestinians have always demanded, along with sovereignty in the West Bank, Gaza, East Jerusalem, and the Old City, a “right of return” to Israel for Palestinian refugees who left or were forced out of Israel when it was established. The Palestinians demand this right not only for those of the hundreds of thousands of refugees who are still alive — a figure estimated in the low tens of thousands — but also for their descendants, who number in the millions.

No Israeli government would ever be likely to accept this demand, since it would spell the end of Israel as a Jewish-majority state. Israel’s position is that Palestinian refugees and their descendants would become citizens of a Palestinian state at the culmination of the peace process, just as Jews who fled or were forced out of Middle Eastern countries by hostile governments became citizens of Israel.

Agencies contributed to this report.