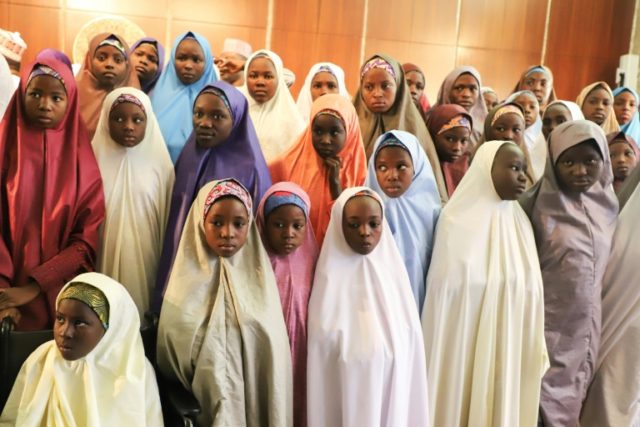 Boko Haram refused to release a 15-year-old Christian girl kidnapped this month along with 110 other schoolgirls because she rebuffed the terrorist organization’s efforts to convert her to Islam, her parents revealed.

Leah Sharibu is the only one of the abducted girls still held by the Boko Haram jihadists “because she refused to convert to Islam,” stressed USA Today.

My daughter is alive, but they wouldn’t release her because she is a Christian. They told her they would release her if she converted, but she said she will never become a Muslim. I am very sad, but I am also overjoyed because my daughter did not denounce Christ.

Echoing Mr. Sharibu, the girl’s mother, Rebecca Sharibu, also indicated the jihadists are not releasing her daughter because she refuses to denounce her Christian faith.

What her schoolmates told me was that my daughter was told she must recite the Kalima Shahada [the Islamic profession of faith]. And she said she does not know how to recite it, that she was not brought up as a Muslim.

She had already boarded alongside others who were ready to come home. They said my daughter would only be brought back home the day she knows how to recite Kalima Shahada.

On February 19, Boko Haram terrorists kidnapped 110 girls when they stormed the Government Girls Science and Technical College in Dapchi, Nigeria.

The jihadist organization freed most (104) of the girls last week.

Referring to the freed abductees, USA Today notes, “They were dropped off in the middle of the night under an agreement with the government that included withdrawing Nigerian soldiers. But five girls had died during the assault, the released schoolgirls said.”

Only 15-year-old Leah remains in the hands of the brutal terrorist group, known for kidnapping Christian girls and forcing them to convert to Islam, many times by threatening with rape and following through.

Nigerian President Muhammadu Buhari’s administration reportedly claims it did not pay the terrorists a ransom for the girl, adding that security forces obtained the release through “back-channel efforts,” after “a pause in operations” and with the help of “some friends of the country.”

Critics have blasted the Nigerian president for the kidnapping, which came a few years after Boko Haram abducted nearly 300 girls from Nigeria’s Chibok in April 2014.

Olapade Agoro, the chairman of an opposition party, threatened to take the Nigerian leader to the International Criminal Court in The Hague if the government does not secure Leah’s release.

“He said the government’s negotiations favored Muslims, and Leah was the only Christian student abducted,” notes USA Today.

The Nigerian leader has repeatedly claimed that his administration defeated Boko Haram just to have the group carry out attacks soon after the allegations.

“Leah Sharibu will not be abandoned,” President Buhari proclaimed.