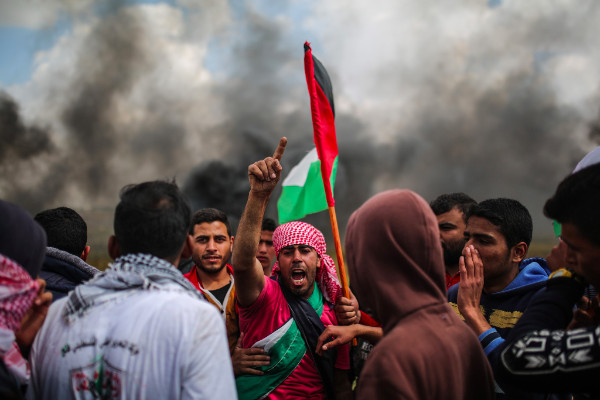 Muslims in Israel selected two Holy days for Jews and Christians (Passover & Easter) to launch their public protests to “overrun” Israel because Islamic doctrine requires eternal HATRED (enmity) against Judaism & Christianity. In the minds of these jihadis, violent protests on infidel holy days indicate doctrinal supremacy. Islamic hated against Jews & Christians is so inbred that there are only two solutions: spiritual conversion out of Islam or physical force to defeat Islam. The IDF is NOT in the business of “saving souls” so the Muslim protesters have chosen the force option.

Seriously, does anyone still believe that Islam is a “religion of peace?” Those who foolishly hold to this comical viewpoint don’t really believe it to be true but maintain the façade in order to keep leftist donations fueling their non-profit “human-rights” organizations. This house built on sand then takes the next survival step by turning to the use of terror tactics happily supplied by arch-enemies (HAMAS & Hezbollah) coming together to destroy the State of Israel. In that Sunni HAMAS & Shia’ Hezbollah produce nothing, thus generate NO income, two, blood-lust financiers  (Turkey & Iran) rush to bankroll the terror circus.

When your flawed theological doctrine mandates that you view yourself superior to Jews and Christians but your daily experience proves otherwise, it’s understandable that your capability for logical clarity is demented and you make foolish mistakes, like under-estimating the fortitude of President Donald Trump. Muslims in Israel believe that if they scream loud enough on the Gaza border, sacrifice more of their women and children (yes, this is a HAMAS military strategy) and get the Jew-haters at the United Nations to “condemn” Israel then President Trump will buckle at the knee, tremble to the podium and change his mind about moving the US Embassy from Tel Aviv to the eternal capital of Israel, Jerusalem, on May 14.

WHAT YOU CAN DO

There are few moments in your lifetime where you can have a direct impact on the defense of Western Civilization, the Judeo-Christian worldview, over the deadly and destructive system of hate-based Islam. This historic moment manifests on May 14, 2018, with the symbolic and physical move of the US Embassy to Jerusalem.

As you may know, Tom Trento and The United West team, along with Judge Jeanine Pirro will be in Israel in May, at the Gaza border and in Jerusalem on May 14, celebrating the Embassy move. If you want to be part of this effort to stand with Israel at one of her defining moments in history, please contact us and we will get you involved in the fight!

Through the years all of us have faithfully spoken many words, now is the time to put WORKS to those WORDS!

WRITE US HERE FOR MORE INFORMATION