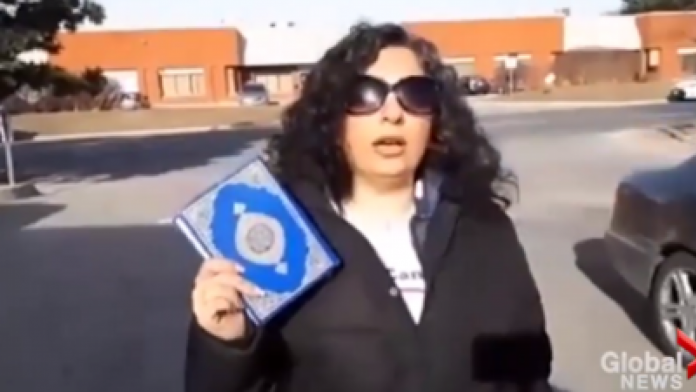 Would the cops have been called in if she had ripped a Bible?

Global News reported Sunday that “Peel Regional Police say they are investigating an incident as ‘hate-motivated’ after a woman can be seen on video at a Mississauga Islamic centre appearing to tear the pages of a Qur’an and putting the pages on cars while calling the religious text ‘Satanic.’” So apparently now it’s a crime in Canada to rip the Qur’an, and even to think ill of it.

This is not the most effective way to call attention to the exhortations to violence and hatred that are within the Qur’an. It allows the Muslims at the Dar Al-Tawheed Islamic Centre, where this incident took place, to play the role of the victim, which they are doing to the hilt in the wake of this incident, and which we have seen that Muslim spokesmen are all too eager to play — victimhood, after all, is currency in today’s society.

Still, if someone hostile to Christianity had torn pages of the New Testament and left them on car windshields at a church, would he or she be charged with a “hate crime”? I doubt it. The churchgoers might see this person as obnoxious, and a nuisance, and then they’d take the paper off their windshields and drive away. I’ve witnessed supporters of the late Tony Alamo, a preacher who believed that the Catholic Church was the source of all evil, leaving anti-Catholic leaflets on the windshields of cars parked at a Catholic church. No one was charged with a “hate crime,” and the churchgoers just shrugged it off.

Is tearing up a book a crime? Is leaving paper on someone’s car a crime? The only crime here is that the woman who did this, an ex-Muslim named Sandra Solomon, is protesting against a protected victim group that is eager to seize upon anything that it can portray as a “hate crime,” so as to buttress its claims to be victims of widespread “Islamophobia,” persecution and harassment, and thus in need of special consideration and accommodation.

So — Sandra Solomon was rude and obnoxious. She called the Qur’an a “Satanic, evil book.” She said other Islamic books were “garbage.” This is all reported in this article as if it is evidence of a crime. But is thinking negatively about the Qur’an and Islam really a crime in Canada? It may be: after the passage of the “anti-Islamophobia” motion M-103, there is no certainty that Canada guarantees the freedom of speech. But disliking the Qur’an and Islam, and tearing the Qur’an, are actually only crimes under Islamic law. Is Canada now adopting Sharia blasphemy laws? We shall see, in the way Canadian authorities treat this case.

What we know now is that police “are looking into the complaints and are treating the incidents as ‘hate-motivated.’”

What if it is? The idea that “hate” is a “crime” is ridiculous. The Qur’an is full of hatred toward unbelievers, “the most vile of created beings” (98:6). But if that passage is ever recited in a mosque in Canada, will the Muslim who recited it be arrested on suspicion that the recitation was “hate-motivated”? Of course not. Look at Ayman Elkasrawy, the Toronto imam who prayed that Allah would kill the Jews. Was he arrested on suspicion of making “hate-motivated” remarks? Of course not. The Toronto Star ran a long puff piece on him, trying to explain away his remarks, and that was that. Will the Toronto Star run a long puff piece on Sandra Solomon, explaining away her actions? Of course not.

See, there’s hate and there’s hate. Good hate and bad hate. Leftists and Islamic supremacists are among the most hateful people I’ve ever encountered: in my interactions with people such as Reza Aslan, Nathan Lean, Qasim Rashid, Khaleel Mohammed and others, I’ve found them to be arrogant, rude, and hate-filled to an appalling degree — to a degree that I thought at first would interfere with their public personas as being exponents of “tolerance” and such. I was naive. Leftists and Muslim spokesmen can be as vile, vicious, insulting and threatening as they want, and nothing happens, no one cares, because their hates are approved by their colleagues among the political and media elites. Their hate is good. “Hate speech” can only be spoken by foes of the agenda of those elites. Likewise with “hate crimes” — they can only be committed by foes of jihad terror and others who are outside the bounds of acceptable discourse.

“Hate speech” and “hate crime” laws are, therefore, tools of the powerful that they use to silence the powerless, and to demonize, marginalize and destroy their critics, so that they can continue to be the powerful. They don’t really have anything to do with actual “hate” at all.