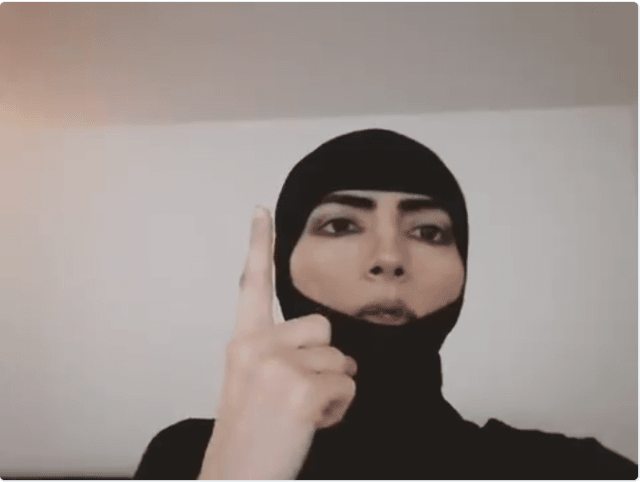 The YouTube shooter has been identified as Nasim Aghdam, a self-described “vegan bodybuilder and animal rights activist.” 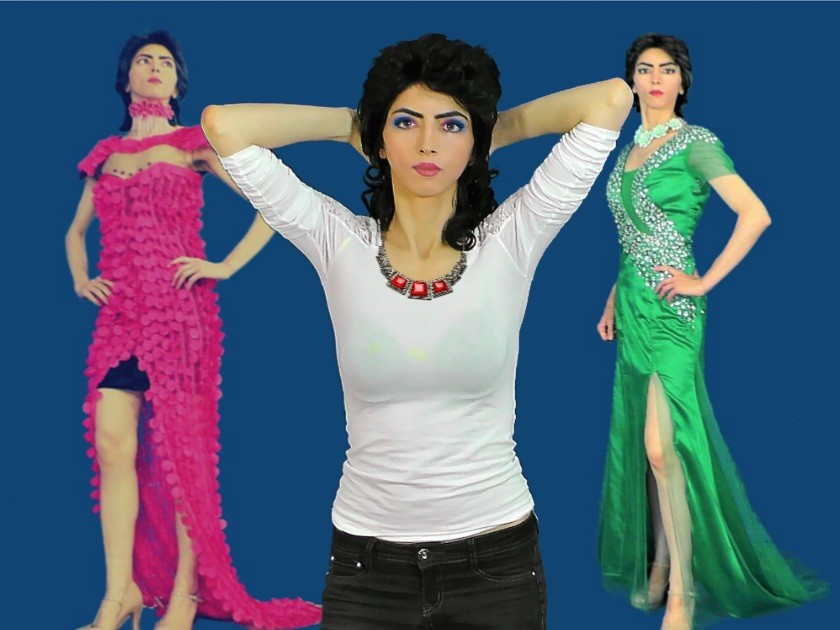 Authorities report she died of a self-inflicted gunshot wound after shooting a man and two women at YouTube’s headquarters in San Bruno, California.

According to reports, Nasim, a woman in her late 30s, was a YouTuber herself and may have held a grudge against the self-broadcasting platform. According to Heavy, she rantedabout the site in many of her online videos.

This is a developing story. All times Pacific.

A reporter for CBS 2/KCAL 9 News says she “Just spoke to the father of Nasim Aghdam. He says his daughter had been missing for several days. When cops found her in NorCal last night, he warned them she was angry with YouTube.”

BREAKING: Just spoke to the father of Nasim Aghdam. He says his daughter had been missing for several days. When cops found her in NorCal last night, he warned them she was angry with YouTube. @CBSLA pic.twitter.com/mgCw9ivqos

In one of Nasim’s many online videos, she discussed her perceived censorship by YouTube, saying “This is what they are doing to a vegan activist, and many other people, who try to promote healthy, humane, and smart living.”

“People like me are not good for big businesses, like for animal businesses, for medicine businesses, and for many other businesses. That’s why they are discriminating and censoring us.”

I’m being discriminated and filtered on YouTube and I’m not the only one.

So recently, they also attacked my Persian channel, Nasime Sabz, and if you go and check my videos you’ll see that my new videos hardly get views, and my old videos that used to get many views stopped getting views. So this is because I’m being filtered.

Many [inaudible] like Nicki Minaj, Miley and many others have sensual [inaudible].. so inappropriate for children to watch, don’t get age-restricted. But my videos – my workout video – gets age restricted.

This is what they are doing to a vegan activist, and many other people, who try to promote healthy, humane, and smart living. People like me are not good for big businesses, like for animal businesses, for medicine businesses, and for many other businesses. That’s why they are discriminating and censoring us. For more info visit my website.

In another social media video, Nisam acts as a contestant on the show America’s Got Talent.

CENSORSHIP DISCRIMINATION BY YOUTUBE STAFF AGAINST ME! Youtube is destroying my channels to “Suppress Freedom Of Speech” if you ckeck all my youtube channels you will realize my videos are merely relegated now, so that hardly anyone sees them! 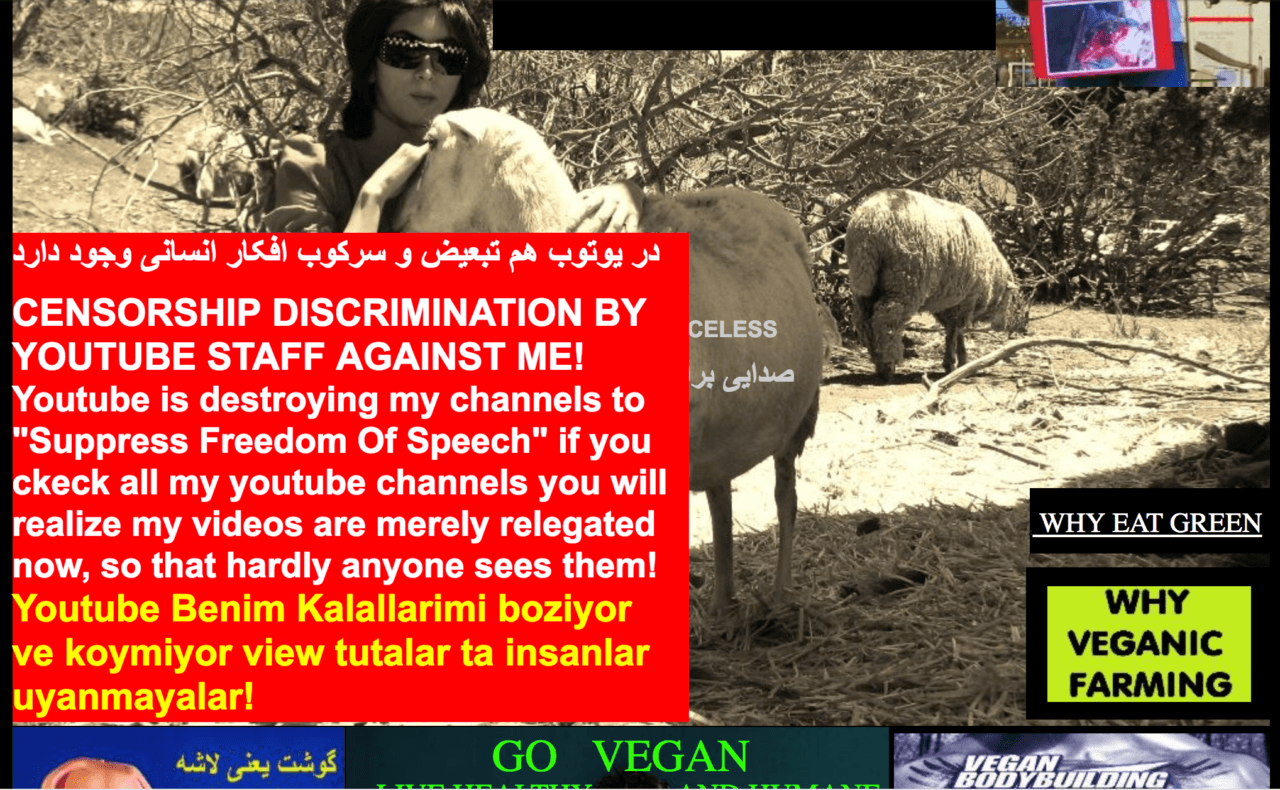 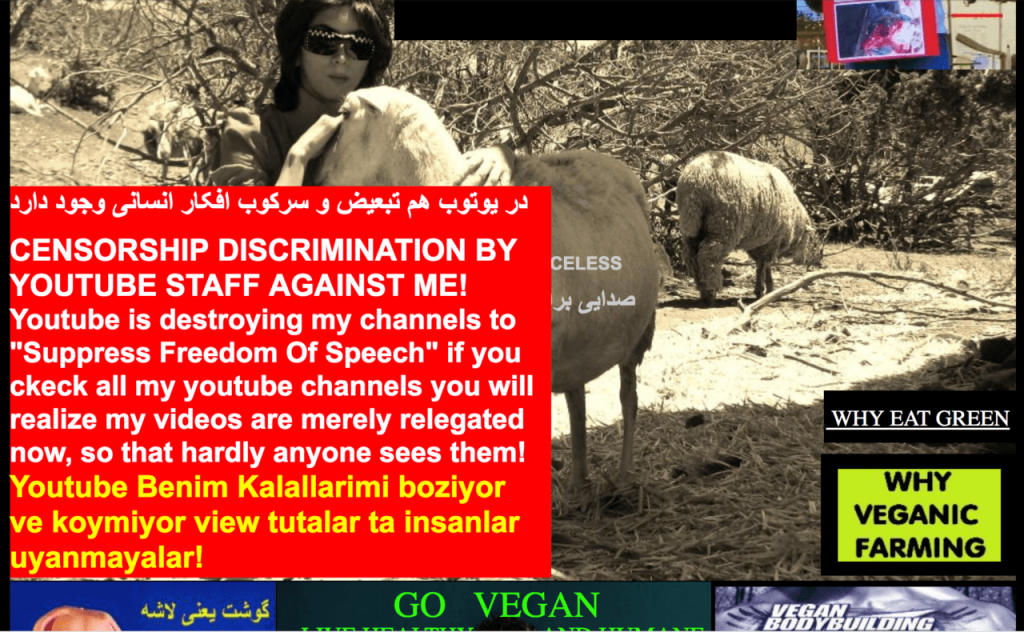 Nasim was reportedly used as a source in an LA Times article about an animal rights protest:

For an hour, activists waved banners and chanted slogans at the main gate to the base. There were no arrests or confrontations.

“For me animal rights equals human rights,” said Nasim Aghdam, 29, a construction company office manager from San Diego. “Just because they can’t talk doesn’t mean we should take advantage of them.”

The YouTube shooter, Nasim Aghdam, described herself on her now-banned YouTube page as a “vegan bodybuilder and animal rights activist” per Breitbart’s Allum Bokhari.

Suspect Nasim Aghdam’s social media accounts reveal she had concerns about animal rights and free speech. Here is a video taken from her Instagram asking, “What do you think about freedom of speech and does it really exist in western countries!?” and “Do you think U.S.A is better than Iran, or is Iran better than U.S.A.?”

Youtube Suspect Nasim Aghdam asks on Instagram: What do you think about freedom of speech and does it really exist in western countries!? “Do you think U.S.A is better than Iran, or is Iran better than U.S.A.?” https://t.co/BhalEHpsIh pic.twitter.com/QWKWbpiD0j

NBC Bay Area Investigative Reporter Vicky Nguyen reports that Nasim drove up to San Bruno from Riverside County before shooting a man and two women before killing herself:

Breaking: Nasim Aghdam identified as the YouTube shooter. She had her own YouTube channel and apparently ranted against the company in her videos. Sources say she drove up to San Bruno from Riverside County, shot a man and 2 women before killing herself. #youtubeshooter

The YouTube shooter has been identified by ABC News as Nasim Aghdam. Reports say she died from a self-

JUST IN: Two law enforcement sources say authorities have preliminarily identified the YouTube shooter as Nasim Aghdam, a woman with previous addresses in the Southern California cities of Riverside and San Diego. https://t.co/vmWDgKsXJc

Sen. Dianne Feinstein says “We simply must take meaningful steps to stop these shootings and stem the tide of gun violence in our communities” in full statement following YouTube shooting https://t.co/qoQ1w6j3kRpic.twitter.com/6hQD3GnbSF

JUST IN: Police tell NBC News’ @Tom_Winter that a woman in her 30s approached an outdoor patio at Youtube HQ during lunch and opened fire.

Multiple officials say they believe the motive is a “domestic related dispute.” pic.twitter.com/VasbM1UKVs

Authorities say a woman believed to be the shooter at YouTube headquarters is dead of a self-inflicted gunshot and four others have been wounded.

San Bruno Police Chief Ed Barberini told reporters Tuesday that the victims have gunshot wounds and were taken to hospitals.

He says the hospital is expecting more patients but doesn’t know their conditions.

Was just briefed on the shooting at YouTube’s HQ in San Bruno, California. Our thoughts and prayers are with everybody involved. Thank you to our phenomenal Law Enforcement Officers and First Responders that are currently on the scene.

• Officers arrived at 12:48 pm PT
• 4 victims located, transported with gunshot wounds
• One victim had wound that “may have been self inflicted” pic.twitter.com/hSXB0hCdvO

One person dead from possible self-inflicted wound who “at this time we believe to be the shooter.” https://t.co/7e2bwTZCEl pic.twitter.com/8hdgVmnOOc

The San Mateo County Coroner has been called to Youtube HQ in San Bruno. pic.twitter.com/iNoa6JoAXK

“There is a suspect outstanding. You’re in a safe place,” said this armed police officer. Lots of youtube employees told to remain in this nearby parking lot pic.twitter.com/ooXcnV0Dvb

“When I was coming in there was a big commotion coming from across the street. Lady came and went into the Carl’s Jr. and had been shot in the foot,” said a witness who saw one of the YouTube HQ shooting victims. https://t.co/mRdpyhYtJ0 pic.twitter.com/nGoXue1Cqm

WATCH: A witness describes the moments after a shooter opened fire at the Youtube headquarters — @nbcbayarea

“You could feel the sensation from the shots through my body.” pic.twitter.com/p97b9U32hc

Confirmed: People have been killed during the shooting at YouTube HQ, Zuckerberg San Francisco General Hospital PIO Brent Andrew tells him. Hospital has received “a number of patients with gunshot wounds.” He expects more, he tells me https://t.co/OrZKVInrMA

And San Francisco General’s spox tells me “several” victims have already arrived at their hospital.

So far they have not had any fatalities at SF General.

Another eyewitness told KTVU that a second victim, another woman, was shot “10 times” and was almost certainly dead. Then there were four shots, and then nothing. He says the shooting began in the courtyard of the YouTube building where there was a party going on.

(As a caveat, the man refused to give his name to reporters, saying, “Everybody knows me.”)

Update — 2:05 PM: Second report that the suspect is a woman.

#BREAKING – Sources tell KRON4 that the shooter at #YouTube is a woman https://t.co/mVJwMHXIGU pic.twitter.com/463vGgBWqj

“We know that the ATF is responding. The San Mateo County Coroner has not been called to the scene, indicating that they had not received any reports of deaths at this point,” @jamieyuccas reports. https://t.co/mRdpyhYtJ0 pic.twitter.com/7mlgeTCaSi

KTVU just reported that Mike Finney, an employee at the Carl’s Jr. across the street from the YouTube complex, treated a young Asian woman who had been shot in the calf. He used a bungee cord as a tourniquet until she was evacuated. She was calm and did not seem to have seen the shooter.

The ATF San Francisco Field Division is responding to a reported shooting at YouTube headquarters in San Bruno, Calif. pic.twitter.com/l7XabZ5FpI

We are responding to an active shooter. Please stay away from Cherry Ave & Bay Hill Drive.

SWAT has arrived on site. And we saw a negotiator go in #youtubeshooting pic.twitter.com/MSRMWUXZPB

Update — 1:29 PM: Perspectives from outside the building:

Gunshots at the @youtube office in San Bruno. My office across the street is on lockdown.

Update — 1:25 PM: Employee gives a detailed account of the ordeal from inside — casualties are unknown at this point, but he reports seeing blood:

We were sitting in a meeting and then we heard people running because it was rumbling the floor. First thought was earthquake. https://t.co/gmolQmRXm1

Active shooter at YouTube HQ. Heard shots and saw people running while at my desk. Now barricaded inside a room with coworkers.

We are seeing @YouTube employees being brought out with hands up! pic.twitter.com/ZlSMY9FIVm

Active shooter at YouTube HQ. Heard shots and saw people running while at my desk. Now barricaded inside a room with coworkers.

Police activity at 901 Cherry Ave, please stay out of the area. pic.twitter.com/H6iAj0g7ra

There are police surrounding the @YouTube building – potential shooter. Be safe! pic.twitter.com/4JTKkn3Oy1