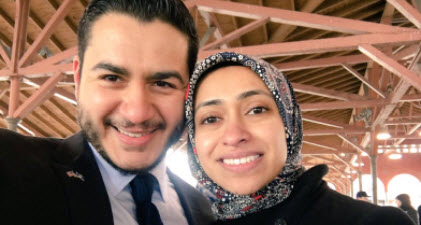 The Democratic Party may have found its next Barack Obama.

His name is Dr. Abdul el-Sayed, he’s a 32-year-old medical doctor and he recently launched his campaign for governor of Michigan, the election for which is in November 2018. If he wins he would be America’s first Muslim governor.

He speaks articulately, without an accent, inserts humor into his speeches at seemingly just the right moments, and he has the full backing of America’s powerful Muslim Brotherhood-linked network of Islamic organizations.

In an interview with Al Jazeera, El-Sayed said Michigan voters are having “buyer’s remorse,” and that President Trump’s decisions “are at odds with deeply held American values, and distractions from real issues.”

Sayed served as the executive director of the Detroit Health Department and Health Officer for the City of Detroit, appointed by Mayor Mike Duggan. At 30 years old, he was at the time of his appointment in 2015 the youngest health director in a major U.S. city.

According to El-Sayed, his decision to run for governor was influenced by concerns over state leadership following the lead-tainted water crisis in Flint, as well as policies being implemented in Washington, D.C., under President Trump.

Dick Manasseri, spokesman for Secure Michigan, a group that educates Michiganders about the threat of Shariah law, predicts that Sayed will at least win the Democratic nomination for governor.

“It is the exact same thing as Barack Obama in Chicago in the early 2000s,” said Manasseri. “He’s young, attractive, he does not give out a lot of information, he speaks in platitudes about celebrating inclusiveness and diversity.”

Sayed is known as a warrior for environmental justice. He talks about “standing up to corporate polluters,” and how, in his family, he was taught that having “love and compassion” for the vulnerable are “more important than where you’re from.”

“How could any good progressive Democrat vote against that in good conscience?” asks Manasseri.

Sayed is highly educated, a Rhodes scholar who attended Oxford University in 2009 and became a practicing epidemiologist.

“He’s very well packaged,” Manasseri said. “He’s far more accomplished than Barack Obama. Obama was not this accomplished, they connected him to certain foundations and his candidacy took off.”

Sayed is the recipient of several research awards, including being named one of the Carnegie Council’s Policy Innovators. He created and taught the Mailman School’s first-ever course on systems science and population health. He co-edited a textbook on the topic published in 2017 by Oxford University Press entitled “Systems Science and Population Health.”

In his new video ad Sayed says that as Detroit’s health director one of the first big things he did was come up with a government program to purchase eyeglasses for every kid that needed a pair. “Why? Because every child deserves the right to see what’s on the blackboard,” he said in his campaign launch speech.

He pointed to his hand as the map of Michigan [a very folksy thing to do] to locate Gratiot County, “in the heartland of Michigan,” the place where he was born to Egyptian-immigrant parents and raised by his dad, Muhammad, and his stepmother Jacqueline, a native Michigander. 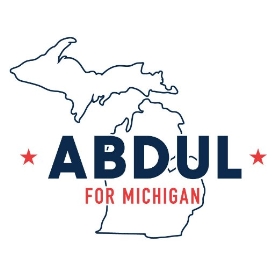 In his campaign launch on Feb. 25 at Detroit’s Eastern Market, Sayed talked about his dad growing up one of six kids in a one-bedroom apartment in Egypt and coming to America and bringing his diversity of culture to Michigan. It’s all about celebrating multiculturalism, he said, standing at a podium in the market amid supporters holding signs that read “Abdul for Michigan.”

“He would come to this market to buy the foods to make the dishes that would make him feel at home. You see this market for him brought him home, from Alexandria right here in Detroit. Some of my most wholesome memories took place right here,” Sayed said. “And I remember buying those foods… but not only that I remember the diversity of faces that I would experience here, black and white, Asian, Latino. People who are coming together to celebrate something, together. Farmers and truckers and factory workers. Families from up north doing business with families from right here in Detroit. Each of them Buying and selling the same exact ingredients that they would take home to turn into the dishes that celebrated their families’ history.”

Sayed promotes what he calls his “rather unusual American story.”

He said his proud Egyptian parents, Fattah and Muhammad, emigrated to the U.S. “in search of a better life.” Muhammad came originally on a student visa to attend Wayne State University.

“When they came here they took a bet on an America that was big enough for them, too. They believed in a country that would give them dignified well-paying jobs, that would educate their children. Where they could pray however they wanted to pray.”

Sayed said his “diverse if highly unlikely family” taught him that “what you believe and stand for is more important than where you come from, to have compassion and care and respect for those more vulnerable.” He said he was taught that “real leaders are those that can stand firm against the powerful, stand strong with the weak, and stand humbly before God.”

At the Thanksgiving dinner table, “which is a very diverse dinner table,” hosted by he and his wife Sarah, he said his family includes a Presbyterian deacon from Flint, an imam from Egypt and an atheist-Polish uncle who is a professor at Michigan.

“And they share hard conversations about life in American and they don’t always agree, but they respect and love each other…they share a common future that brings them together. And as Michiganders, so do we.”

Manaserri says the Muslim Brotherhood would never support a candidate that didn’t have tons of money behind him and that they did not believe “has a real chance of winning.”

“Any Republican would be afraid to confront him on his Muslim Brotherhood connections or his views on Shariah,” Manasseri said. “He is a devout Shariah-compliant guy, and I would predict that he will be endorsed by the Catholic Church, which is very powerful in Michigan.”

Manasseri points out that a bill supporting American Law for American Courts, widely regarded as an anti-Shariah law, was defeated in the Michigan Legislature when two powerful lobbies – the Michigan Catholic Conference and the Council on American-Islamic Relations or CAIR – teamed up to kill it. He expects the same coalition to form behind a candidate who would make history as America’s first Muslim governor.

“So if this guy rises in the polls, I would predict the Catholic Church will support his candidacy,” he said. “Just like with Obama, because we gotta make history.”

“It’s Obama II,” Manasseri said. “Elizabeth Warren will be coming to campaign for him, the Democrats in other states will be raising money for him. The DNC number-two man [Keith Ellison] will be raising money for him. Of course this guy is going to be on the Sunday morning talk shows. He’ll be everywhere. A candidate for governor who is Muslim Brotherhood …if that doesn’t tell you there’s a Shariah swamp in Michigan I don’t know what does.”