Deputy Prosecutor Brian Hultgrenn “alleges that in the days leading up to the attack, Sweidan threatened to kill his wife before she could divorce him or leave him….Alhafeth, 40, filed for divorce in late October. Her petition states the couple married May 23, 1996, in Homs, Syria, but the marriage was ‘irretrievably broken’ on Aug. 30 when Sweidan ‘attempted to murder’ her.”

If she divorced or left him, it would have been an affront to his honor.

Muslims commit 91 percent of honor killings worldwide. The Palestinian Authority gives pardons or suspended sentences for honor murders. Iraqi women have asked for tougher sentences for Islamic honor murderers, who get off lightly now. Syria in 2009 scrapped a law limiting the length of sentences for honor killings, but “the new law says a man can still benefit from extenuating circumstances in crimes of passion or honour ‘provided he serves a prison term of no less than two years in the case of killing.’” And in 2003 the Jordanian Parliament voted down on Islamic grounds a provision designed to stiffen penalties for honor killings. Al-Jazeera reported that “Islamists and conservatives said the laws violated religious traditions and would destroy families and values.”

Until the encouragement Islamic law gives to honor killing is acknowledged and confronted, more women will suffer. 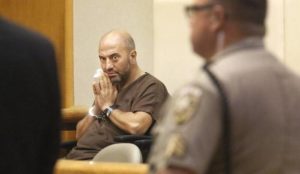 “This Kennewick father threatened his wife for days, police say. She was stabbed 23 times,” by Kristin M. Kraemer, Tri-City Herald, April 2, 2018 (thanks to Craig):

A Kennewick father of four is on trial for an August attack that left his wife with 23 stab wounds.

Prosecutors allege the crimes happened within sight or sound of the couple’s toddler, and involved domestic violence and the use of a deadly weapon.

Sweidan has denied the allegations. His attorneys, Michael Vander Sys and Eric Scott, do not plan to call any witnesses.

Sweidan, who is from Syria, has been assigned two Arabic interpreters for the trial. The interpreters trade places next to Sweidan every 20 minutes.

Deputy prosecutors and defense attorneys said Monday that immigration will be a question for potential jurors during selection to make sure they do not have feelings against Sweidan or his wife, Dania Z. Alhafeth, because of the couple’s status.

The family in 2015 came to the United States legally through World Relief as refugees, the lawyers said. They first emigrated to Jordan because of the war in their home country.

Deputy Prosecutor Brian Hultgrenn told the court he plans to introduce in trial background information on the couple’s relationship, including the “pattern of power and control that (Sweidan) exercises over the victim.”

Hultgrenn said it started in Syria, then ramped up after the family came to America, to “a culture where women have more rights and choices and freedoms.”

He alleges that in the days leading up to the attack, Sweidan threatened to kill his wife before she could divorce him or leave him. The breaking point was Aug. 30, Hultgrenn said.

Alhafeth, 40, filed for divorce in late October. Her petition states the couple married May 23, 1996, in Homs, Syria, but the marriage was “irretrievably broken” on Aug. 30 when Sweidan “attempted to murder” her….

Alhafeth was taken to Trios Southridge Hospital in Kennewick with severe injuries.

She had deep gashes on the front and back of her torso and on her face. Some of the cuts reached her internal organs, court documents said.

The toddler, who was found locked inside a bedroom, had a spot of blood on his shirt, documents said.

At about the same time the neighbor was calling 911, Sweidan showed up in the hospital emergency room with cuts to his hands.

He eventually was identified as Alhafeth’s husband, and told medical staff his wounds either were from cutting meat or from a machine at work, court documents said.

When officers met up with Sweidan at the hospital, he “seemed calm and did not ask about his wife,” documents said….