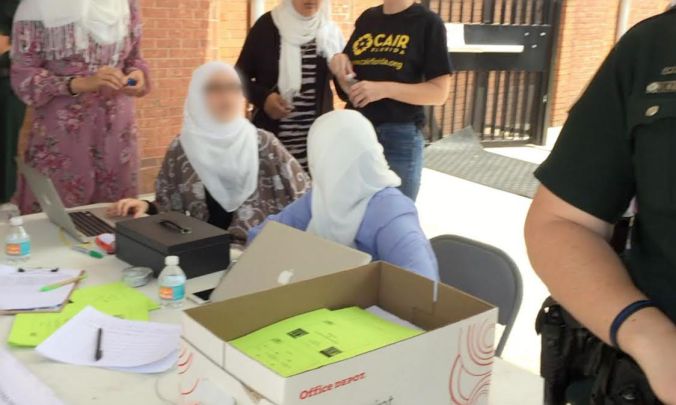 On Saturday, the Greenwood Lakes Middle School in coordination with Muslim community groups in Orlando hosted a Syrian sheik who has called for the killing of gays and all Jews.

Conservative journalist Laura Loomer drove to Orlando to report on the event, which was described on the flyer as being open to the public. Besides being a public event, the event was hosted at a taxpayer-funded Florida middle school, which gives any member of the public and the press the right to come on the property.

When Loomer approached the table to enter the event, organizers and an official from CAIR refused to admit Loomer and her cameraman into the event, and they were threatened with arrest by officers from the Seminole County Sheriff’s Office.

According to the lease agreement between Seminole County Public Schools and any organization who uses one of the public school facilities for an event, “Persons will not be excluded from participation in any user activity on any basis set forth in §1000.5, Fla. Stat., ‘Florida. Educational Equity Act’, or for any other basis prohibited by the law.”

In a flyer created for a “Positive Parenting Skills” conference, Islamic scholar Dr. M. Rateb Al-Nabulsi was listed as a “special guest speaker” at the event, which was held by the Security Advancement Center (SAC), Islamic Circle of North America (ICNA), and Aisha Cultural Center in Orlando.

Al Nabulsi, the Muslim extremist guest speaker, is notorious for making anti-American, anti-gay, and anti-Jew comments, all of which have been caught on camera and translated into English.  Nonetheless, he has been invited back into the very same community that is still struggling to recover from a jihadi who carried out an ISIS terror attack at Pulse nightclub in June 2016.

By denying Loomer and counter protesters entrance to the event, each of the Islamic groups that organized the event, including CAIR, appear to have violated Florida state law for the sake of preventing the media from recording an Islamic cleric who openly advocates for terrorism and genocide.

For years, Florida Muslim leaders have welcomed with open arms Rateb Al-Nabulsi one of the “Muslim 500” most influential Muslims in the world.  From the Islamic Center of Central Florida, to the Islamic Center of Boca Raton, the Aisha mosque, the Islamic Center of North America (ICNA), to the Council on American Islamic Relations (CAIR), each of these organizations have rolled out the red carpet for the renowned Islamic hate cleric who on video has proclaimed his support for giving the death penalty to homosexuals and has stated that Muslims have a duty to carry out “acts of jihad” in their fight against “evil Jews.”

It may not be surprising that the Islamic Center of Central Florida led by Imam Musri, who once held a fundraiser for Hamas, welcomed this jihadist to Florida.

It is also not surprising that a mosque led by Florida Atlantic University professor Bassam “Chop Chop” Alhalabi, who endorses chopping off hands for stealing and has advocated for the extermination of Jews on his website, embraced the cleric at the Islamic Center of Boca Raton on April 13 of this year.

CAIR was caught registering guests at the Orlando middle school to listen to the pro-terror special guest speaker in the radical event disguised as a “positive parenting” conference. In the United Arab Emirates, CAIR has been designated as an official terrorist organization.

“When a journalist even dares to show up and report on the pro-terror, anti-gay, anti-Jew, and anti-American sentiments that are spewed and sponsored by America’s leading Islamic organizations, the response is becoming, ‘nothing to see here folks, move along, or we’ll arrest you if you try to say or report otherwise,’” Loomer said in a statement.

“Evil has an all-powerful ally whom it can never succeed without. That ally is silence, and the universal tolerance and tacit approval of those who do nothing to stop and expose evil are just as guilty as those who commit act of evil.”

Watch the video below