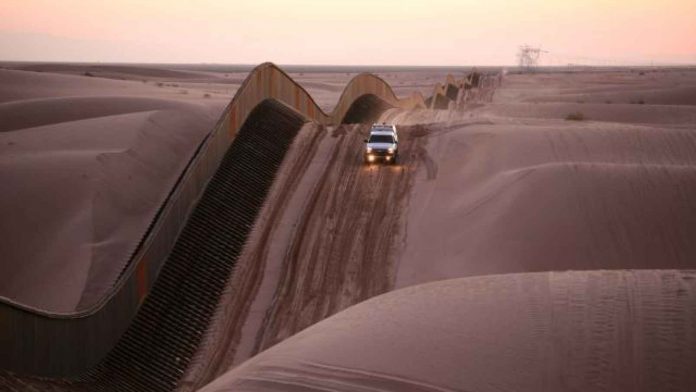 The border that is supposed to separate the United States from Mexico must be made secure.

There is no shortage of compelling reasons why this must happen, and the sooner the better, but today, given the lunacy of Sanctuary Cities and Sanctuary States and the globalist goals of politicians from both political parties, particularly the Democratic Party leadership, rational and reasonable thought processes have been supplanted by greed, corruption and cowardice- fear of upsetting party leaders or fear of alienating deep-pocketed campaign contributors.

Indeed, it is irrational for any leader in the United States to refuse to take whatever measures must be taken to protect America and Americans from the rampant violence, corruption and potential for terrorists to traverse that highly porous border into the United States.

Yet this is precisely the situation that exists today in the United States.

Therefore, today we will consider some of the more compelling facts that demand that, for once and for all, the U.S./Mexican border be secured.

First of all, given the unstable and volatile situation in the Middle East, particularly Syria and U.S.-led military strikes in Syria, undoubtedly Iran and radical Islamists would like to be able to carry out terror attacks within the borders of the United States.

Iran and radical Islamists have a significant presence in Latin America, therefore, all that separates them from us is the U.S./Mexican border.

On April 21, 2017 I wrote an article, Border Security Is National Security in which I referenced an April 12, 2017 Washington Times report, Sharafat Ali Khan smuggled terrorist-linked immigrants.

Khan is a citizen of Pakistan who had established himself as a permanent resident in Brazil and then smuggled numerous illegal aliens from the Middle East into the United States through Mexico.  ICE (Immigration and Customs Enforcement) issued a press release about this case,

That Khan first became a resident of Brazil prior to beginning his smuggling operation is of particular concern.

Terror training camps run by Hamas and Hezbollah are to be found in the Tri-Border region of Brazil (where Brazil abuts with Argentina and Paraguay).  While there was no specific mention of Khan making use of those camps, given the nature of his crimes, this is a very real and troubling possibility.

It is also entirely possible that members of ISIS and al-Qaeda are present in those terror training camps.

Khan is hardly the only alien smuggler who was operating in Latin America and has ties to the Middle East.

In addition to the nexus between Brazil and radical Islamic training camps, Iran routinely flies its Quds Forces, also known as “Shock Troops” into Caracas Venezuela.  They are not present in the the Western hemisphere for vacation.

In addition to the threats posed by Middle Eastern terrorists operating in Latin America, we need to also consider the deteriorating situation to be found in Mexico where it has been reported that last year more than 29,000 people were murdered.

As fighting between drug trafficking groups drives up violence in Mexico to record levels, a new study released on Wednesday measures the economic impact in 2017 at $249 billion in losses — close to 21 percent of the country’s gross domestic product.

Authors of the study presented at the University of San Diego say that focusing on homicides alone fails to address the broad range of factors that drive the violence, and affect the well being of Mexicans on a multitude of levels.

To bring down the violence will mean addressing issues such as corruption and the weak rule of law, the study states.

With more than 29,000 murders, last year was Mexico’s most violent year on record, “with the peacefulness in Mexico deteriorating by 10.7 percent,” states the institute’s study, the fifth in a series of annual reports focusing on Mexico.

In an effort to somehow paint a less pessimistic and alarming image of the level of violence in Mexico, the report concluded with the following:

In spite of public perceptions, “Mexico’s violence is ‘average’ for the Western Hemisphere,” according to the USD study, with homicide rates well below those of smaller countries, including Belize, Colombia, Guatemala, Honduras, Jamaica, and Venezuela.

This is no comfort to be found in that last quote.  A caravan of citizens of Honduras making its way north through Mexico and headed for the United States, prompted President Trump to deploy National Guard troops along the southern border to augment the U.S. Border Patrol in non-law enforcement capacity- providing support for the Border Patrol as was reported in an April 4, 2018 USA Today report,  Trump keeps focus on caravan of Honduran asylum seekers headed to U.S.

It appears that the caravan of Hondurans is being egged on by the government of Honduras, consider that The Arizona Republic reported on April 12, 2018:

Although many migrants traveling in the caravan have decided to remain in Mexico, many still plan to continue on to the U.S. border and apply for asylum, especially the large number of women and children, and a small group of about 25 gay and transgender migrants.

The Honduran ambassador to Mexico, dressed in a suit, tie and dress shoes, joined the migrants in a 9-mile walk from the Honduran embassy in the Condesa neighborhood of Mexico City to the Casa de Peregrino near the Basilica of Our Lady of Guadalupe, Mexican news media reported.

In point of fact, it is not beyond the realm of possibility that terrorists from the Middle East might also seize the opportunity to infiltrate large-scale smuggling groups to gain entry into the United States, not unlike terrorists in Europe infiltrated refugee flows.

Furthermore, as we have seen in the past, the potential exists that aliens who seek asylum in the United States might actually be such criminals and/or terrorists.

The report quoted Bob Goodlatte, the Chairman of the House Judiciary Committee:

“It’s outrageous that members of Mexican drug cartels and others involved in illicit activity are so easily able to exploit our asylum laws and live in the U.S. virtually undetected,” said Judiciary Committee Chairman Bob Goodlatte, Virginia Republican.

“Our asylum laws are in place to help individuals who are facing truly serious persecution in their country,” he said. “However, dangerous criminals are gaming the system by claiming they have a ‘credible fear’ of persecution when often they’ve been the perpetrators of violence themselves.”

Concerns about the lack of integrity to this system were the focus of two House Judiciary Committee hearings conducted as a result of Chairman Goodlatte’s concerns.

Furthermore, this is not simply a matter of “asylum abuse” but of immigration fraud.

The official report that was authored by the 9/11 Commission Staff, 9/11 and Terrorist Travel noted on page 98:

Terrorists in the 1990s, as well as the September 11 hijackers, needed to find a way to stay in or embed themselves in the United States if their operational plans were to come to fruition. As already discussed, this could be accomplished legally by marrying an American citizen, achieving temporary worker status, or applying for asylum after entering. In many cases, the act of filing for an immigration benefit sufficed to permit the alien to remain in the country until the petition was adjudicated. Terrorists were free to conduct surveillance, coordinate operations, obtain and receive funding, go to school and learn English, make contacts in the United States, acquire necessary materials, and execute an attack.

Those concerns are very much as relevant today as they were at the time of those hearings and at the time that the 9/11 Commission reported its findings.

What more needs to happen before our “leaders” finally act to secure that dangerous border?