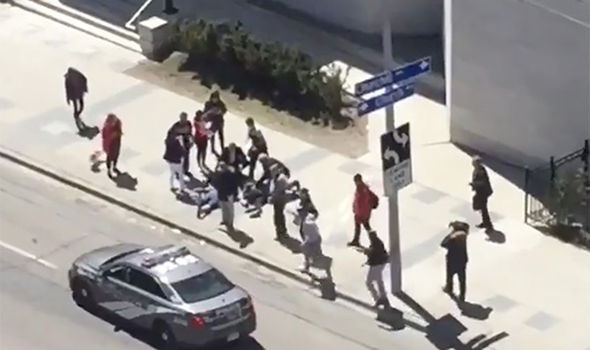 Police in Toronto reported multiple injuries and fatalities after a white van struck pedestrians at the busy intersection of Yonge Street and Finch.

The incident occurred in the early afternoon at the intersection which lies close to the Finch subway and bus station, one of the busiest transport hubs in the city of Toronto. One suspect appears to have been arrested.

Witnesses told local TV crews that the driver was travelling at around 45 miles per hour, “crumbling up people” and taking the action “intentionally”.

Eye witness telling local TV the driver was driving at least 70 or 80km an hour on the sidewalk. Witness in tears said driver was “crumbling up people” “this person was intentionally doing this”

Photos, which has been posted online show multiple people on the ground as a result of the incident. The Toronto subway system, known as the TTC, has shut down service to Finch station in response.

Toronto police are now reporting multiple fatalities following the incident which has seen a man, described as being “Middle-Eastern” in appearance, arrested a short distance away.

The van used in the incident appears to have been rented from the Ryder truck rental company according to photos posted on social media.

Canadian Prime Minister Justin Trudeau gave a brief statement to the media in the houses of parliament in Ottawa, sharing his condolences for the victims and their families. “Obviously we’re just learning about the situation in Toronto. Our hearts go out to anyone affected. We’re going to obviously have more to learn and more to say in the coming hours,” he said.

#UPDATE: Toronto Police confirm a van mounted the curb and hit a number of pedestrians. The driver fled the scene. Police later located the vehicle at Yonge and Sheppard. Driver is in custody, alive, and no motive at this point @Citynews

Alex Shaker, who was driving at the time of the incident and witnessed the van hit multiple people, told CTV News: “He started going down on the sidewalk and crumbling down people one by one. He just destroyed so many people’s lives. Every single thing that got in his way.” Shaker also claimed that one of the victims had been pushing a children’s stroller.

BREAKING: Police in Canada say van that struck 8 to 10 people in Toronto found and driver in custody.

BODIES ALL OVER YONGE ST: Multiple pedestrians struck by van in Torontohttps://t.co/APqGMQLwJc pic.twitter.com/OqIgZQigOu