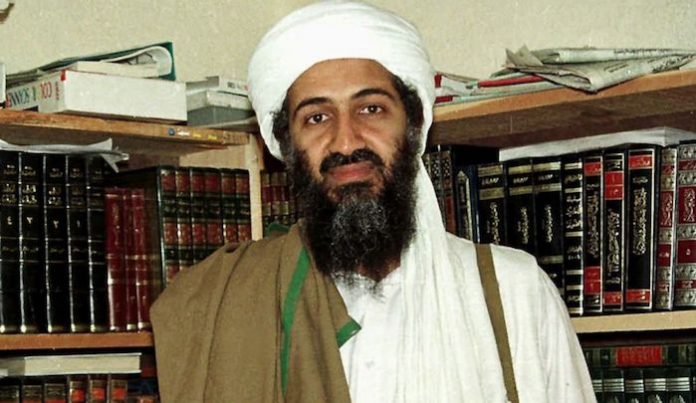 On May 1, 2018, we will have the seventh anniversary of the killing of Osama bin Laden, the mastermind of the 9/11 attacks on American soil that took almost 3,000 lives; these were attacks that bin Laden later described as a “martyrdom operation.”[1] One day after he had been killed bin Laden was buried at sea from a ship of the United States Navy.[2] Let’s take a look back at that event.

…the leader of al Qaeda, and a terrorist who’s responsible for the murder of thousands of innocent men, women, and children… Bin Laden was not a Muslim leader; he was a mass murderer of Muslims…So his demise should be welcomed by all who believe in peace and human dignity.[3]

On May 4, 2011, President Obama was interviewed by the CBS program 60 Minutes. Here is what he had to say about bin Laden:

Obviously bin Laden had been not only a symbol of terrorism, but a mass murderer who’s eluded justice for so long, and so many families who had been affected I think had given up hope. And for us to be able to definitively say, “We got the man who caused thousands of deaths here in the United States and who had been the rallying point for a violent extremist jihad around the world” was something that I think all of us were profoundly grateful to be a part of.[4]

Obama ended this interview with these thoughts:

As nervous as I was about this whole process, the one thing I didn’t lose sleep over was the possibility of taking bin Laden out. Justice was done. And I think that anyone who would question that the perpetrator of mass murder on American soil didn’t deserve what he got needs to have their head examined.[5]

But in this interview, Obama also had this to say about the sea burial of bin Laden:

We thought it was important to think through ahead of time how we would dispose of the body if he were killed in the compound. And I think that what we tried to do was, consulting with experts in Islamic law and ritual, to find something that was appropriate that was respectful [my emphasis] of the body.[6]

A more detailed explanation about the sea burial had been given in a press briefing on May 2, 2011 by John Brennan, then-Assistant to the President for Homeland Security and Counterterrorism. In this explanation, Brennan emphasized the extensive pre-planning and how “Islamic law” had been the major concern in dealing with bin Laden’s body:

The disposal of — the burial of bin Laden’s remains was done in strict conformance with Islamist precepts and practices. It was prepared in accordance with the Islamic requirements. We early on made provisions for that type of burial, and we wanted to make sure that it was going to be done, again, in strict conformance. So it was taken care of in the appropriate way… It took place earlier today our time…The COAs – the course of action and the subsequent decisions that would have to be made have been developed over the course of the last several months. Senior officials, and there was a working group that was working this on a regular basis, if not a daily basis, over the last several weeks, looking at every decision and based on what type of scenario would unfold, what actions and decisions would be made. It was looked at from the standpoint of if we captured him, what will we do with him? Where would he go? If he was killed, what will we do with him, and where would he go? And it was determined that it was in the best interests of all involved that this burial take place, again, according to Islamic requirements, at sea…there is the requirement in Islamic law that an individual be buried within 24 hours. Went inside of Pakistan, carried out the operation, he was killed, he was removed from Pakistan. There were certain steps that had to be taken because of the nature of the operation, and we wanted to make sure we were able to do that in the time period allotted for it. Going to another country, making those arrangements, requirements, would have exceeded that time period, in our view. And so, therefore, we thought that the best way to ensure that his body was given an appropriate Islamic burial was to take those actions that would allow us to do that burial at sea.[7]

Brennan said that after bin Laden had been killed, “There were certain steps that had to be taken,” and they had to make sure that those steps were taken within “the time period allotted for it.” So according to Brennan, the “Islamic law” that required that an individual be buried within 24 hours after death also limited the amount of time for any forensic examination of the body because there had to be time allowed for the burial preparations of that body!

During this May 2nd press briefing, Brennan was also asked if he had consulted with a “Muslim expert” about this sea burial. Brennan replied,

We consulted the appropriate specialists and experts, and there was unanimity that this would be the best way to handle that.

Brennan refused to identify any of these “specialists and experts.”

However, there were many Muslim experts that disagreed with Brennan at the time and said that this burial did not conform to Islamic law: e.g., Mohammed al-Qubaisi, the highest religious law official in Dubai; Abdul-Sattar al-Janabi, an Islamic scholar from Iraq; the former Mufti of Egypt, Shaykh Nasr Farid Wasiland; and Al-Azhar Grand Imam Ahmed El-Tayeb.[8] This is quite an impressive array of experts disagreeing with Brennan’s unnamed “specialists and experts.”

And according to U.S. Navy regulations, there are only a few “classes of individuals” who are eligible for “At Sea Disposition”:

Since bin Laden did not fall into any of these “classes of individuals,” apparently the Obama administration felt that its version of “Islamic law” took precedence over U.S. Navy regulations.

So what does a “traditional” Islamic burial at sea from a ship of the United States Navy consist of? For that we need to look at the official United States Navy manual titled Navy Military Funerals (NAVPERS 15555D, Revised 1999).[10] In “Appendix E” of that manual we find the “Service for the Committal of a Person of the Muslim Faith.” This “Appendix E” is presented below.  But before reading it, keep in mind the following about this service:

SERVICE FOR THE COMMITTAL OF A PERSON OF THE MUSLIM FAITH

–It is not recommended to use a casket unless there is a need for it. The body must have been washed and wrapped as required for the bodies of muslims [sic].

–Plan the setting so that those who have gathered to pray will be facing toward Mecca, with the appointed leader in front facing them.

–If there is more than one body, then they should be put one in front of the other, those of the men nearest to the appointed leader, and those of the women furthest away.

O Allah, you are its Lord, you have created it, and you have guided it towards Islam, and you have taken out his soul and you know best about its secret and open deeds. We have come as intercessors, so forgive him.

O Allah, grant us good in this life and good in the life to come, and save us from the torment of hell.

(Lower the body into the water at this time, in such a way that the face is toward Ka’aba (in Saudi Arabia)).

O Allah, this is your servant who is now your guest, and you are the best of hosts. Forgive him and expand his entrance.

So for a person repeatedly named as a “mass murder” by President Obama, and responsible for the deaths of almost 3,000 innocent people on American soil, the focus of the burial service was on a “traditional” Islamic burial that was “respectful of the body,” that disparaged Jews and Christians, that referred to Bin Laden as Allah’s “servant,” that prayed for Bin Laden to enter Paradise, and that adhered to the dictates of “Islamic law.”

In November of 2012, the Associated Press used the Freedom of Information Act to obtain heavily redacted internal e-mails that were exchanged among U.S. military officials about this sea burial.  Here is some of the information obtained from those e-mails[13]:

Traditional procedures for Islamic burial was [sic] followed…The deceased’s body was washed (ablution) then placed in a white sheet.  The body was placed in a weighted bag. A military officer read prepared religious remarks, which were translated into Arabic by a native speaker. After the words were complete, the body was placed on a prepared flat board, tipped up, whereupon the deceased’s body slid into the sea.

The Defense Department stated that none of the following could be located:

During the previously mentioned DOD Background Briefing on May 2, 2011, a reporter had asked a question that has subsequently been on the minds of observers for many years:

Who actually performed the rituals, the cleaning of his body? Were they American service members? And why all this for a fellow who most of the world determined was not a very good Muslim anyway?  And was in fact a cold blooded killer?

Geoff Morrell, then-Pentagon Press Secretary, replied, “I don’t think we care to get into those details.”[16]

So according to the Obama administration, Osama bin Laden was a “mass murderer” who was not even a “Muslim leader.” Yet President Obama thought it was important enough to be “respectful” of bin Laden’s body that there was extensive pre-planning and consultation with “experts in Islamic law and ritual” to ensure that bin Laden was accorded a funeral that conformed to “Islamic law.” However, noted Muslim scholars said this funeral actually violated Islamic law, and, as we saw, it also violated U.S. Navy regulations. And when more information was requested, there were gaping holes in the information made available and relevant records went missing.

Why all this for such a fellow? The “most transparent administration in history” was not interested in those “details.”

Dr. Stephen M. Kirby is the author of five books about Islam. His latest book is The Lure of Fantasy Islam: Exposing the Myths and Myth Makers.

[7]           Press Briefing by Press Secretary Jay Carney and Assistant to the President for Homeland Security and Counterterrorism John Brennan, May, 2, 2011; accessible at https://obamawhitehouse.archives.gov/the-press-office/2011/05/02/press-briefing-press-secretary-jay-carney-and-assistant-president-homela.