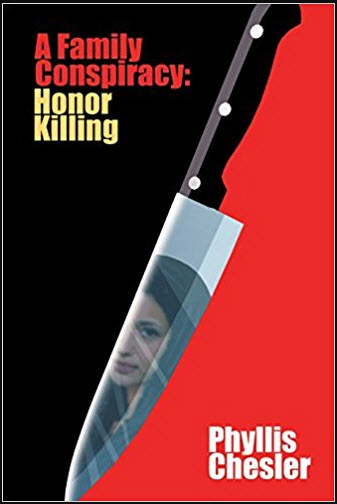 Comprised of ninety-nine chapters, along with an Introduction, this latest book by Jewish feminist, academic and media commentator, Phyllis Chesler, A Family Conspiracy brings together material going back to 2004.  The theme that binds all together is Chesler’s concern to bring into focus the phenomenon of “honor killing,” an extremely controversial term. For while it covers a variety of crimes against women perpetrated by families against their own mothers, wives and daughters with the spurious and vague rationalization of protecting or avenging the honor of the family, it is distinct from what is known as “domestic abuse” in westernized countries where such violence against women is against the law and not tolerated by the general public.

Domestic violence or the killing of wives, daughters and other women in the USA and Europe tends to occur randomly and usually against strangers. The more horrific the killing the less likely the perpetrator is to know his victim. When it is a matter of Muslim on Muslim, Sikh on Sikh or Hindu on Hindu murder, the crimes are well-planned out, carefully carried out by members of the family, and honored by the community. Honor killing is a form of social control overwomen and their bodies, a religious and customary or legal mode of punishment carried out on behalf of the whole community, and perceived as a necessary and virtuous act.

For those who have been reading Chesler’s books and essays over the years, this collection is a welcome chance to re-read many of her online op-ed pieces and to catch up on the essays we have not seen, especially in the scholarly and academic journals.  Her arguments range from the objectively scientific to the engaged polemic and enraged call to action.  They describe people and events she has witnessed with her own eyes, what she has learned from activists forced to flee their homelands for their outspokenness, cris de cœur from those trapped in untenable situations, careful perusal of surveys and meditation on the public documents and private papers held in police files and official storage cabinets.

Chesler collects, analyses and lists the evidence: who gets killed, where, by whom, under what circumstances; how families participate in, react against and deny what is going on; what police do and do not do, as well as social workers and teachers who see and do not see, make feeble attempts to protect the victims and stand back to let the criminals escape detection and punishment; how the judiciary overlooks, rationalizes away, and dismisses the perpetrators, thus failing the victims; and the reporters, editors and managers of the media record and then trivialize, print and then restrict the distribution of information, interviews and images. In the end, alas, no one does anything.

She has argued against the biases she sees in major media such as CNN and The New York Times. While the local press and small television stations do report on the torture, immolation and beheading of women, these cases seem to get lost soon after and do not flow throughout the USA or the rest of the world, as though each individual instance does not form part of a growing picture of very specific sort of violence against women, a Muslim-based cultural phenomenon, or an aspect of world-wide terrorism. Set against any efforts to open a public debate and raise the issue in judicial or legislative arenas, the immigrant elites and organizations such as CAIR confront the reporters and family whistle-blowers with an overwhelming barrage of threats and misinformation.

Chesler has to reiterate her basic arguments and point to the mounting number of instances that prove her points. Each new victim and family of perpetrators of honor killing discussed helps to fill out the picture of how the Islamic conspiracy works, not only openly in so-called Third World countries but in more subtle ways in advanced western nations as well. The profound similarity in method and attitude Chesler reveals makes it possible to capture the essence of the crime.

Then, as the same resistance and misunderstanding on the side of the European and North American courts and social systems expose the obtuse inability or unwillingness of “experts” to see what is clearly before their eyes, Chesler’s frustration and rage grow—and yet she never gives in or gives up.  Her sympathy for the victims grows, her hatred for the criminals and their traditions increases, her anger at the failures of the host societies to take firm action to protect the women and prevent the horrible attacks becomes more focused and determined.  She is erady to praise women, and men from within the migrant communities who stand up against the vicious behaviors, and she congratulates every police chief, reporter and social worker who finally “gets it.”

But the other side overwhelmingly remains unconvinced or in denial. They are organized, strong and dangerously so. The other side consists not only of the national and religious elites who prosper from the continuance of this war against women in their societies, but of ordinary people too frightened—or too ignorant—to stand up against the relentless propaganda and sermonizing.

Most frightening, though, are the liberal and feminist ideologues who refuse to see in complaints against the system anything but colonial rants, racist smears and imperial ambitions.  For this reason, this collection of essays has other dimensions, those more personal to the author. Phyllis Chesler’s many iterations of J’accuse, the public denunciation and challenge Emile Zola published on behalf of Alfred Dreyfus in the late 1890s have not stirred up a national debate in America, and find little resonance in the mainstream media or anywhere outside the close circle of her supporters.

As Zola had to do, Chesler must fearlessly take on the media giants, the power of the pro-Islamic and anti-Zionist lobby groups, and the deep-seated and many times well-meaning and desirable attitudes of Political Correctness—its ideology of tolerance, secular distrust of all religions (except Islam), and its sense of guilt for the West’s past wrongs in Colonialism, Imperialism, Racism, Sexism, Slavery and on and on—but in this issue especially woefully self-deluded and spinelessly inarticulate.

In addition to hard evidence and the mounting of moral and judicial appeals to do something, there is a story of her own growing awareness of what honour killing is all about and what it implies for the status for all women in the world. Year by year, Chesler is still shocked and outraged, and brought to confess to having herself in the past missed one point or another, confused the roles of parents and siblings in the murder of rebellious girls and recalcitrant wives, or downplayed the role of females in organizing and carrying out the crimes, or not realizing the pressure brought to bear on families.  Persistence and sheer doggedness, however, have led Chesler to write to people, make phone calls, call up favors and offer her services to keep the issues alive. The bloody accounts of murders and the collusion between family members to torture their own kin stir her to action. The stupidity and timidity of others only spur her on, and the cries for help are not allowed to go unanswered.

Chesler becomes increasingly aware of how many of her erstwhile comrades-in-arms during the struggle for women’s liberation have transmogrified into enemies, as they twist their feminist ideologies into the politically-correct demonization of western bourgeois values and ideals, and such Enlightenment notions as equality, tolerance, justice and rationality. Her own bona fides have been questioned to speak out on feminist issues, her own presence in rallies and conferences threatened by dis-invitation and violence, and her integrity as a Jewish woman mocked.

As her health declines it might seem a time to step back and let the next generation of feminist scholars and political activists take over.  It isn’t. Her home and her mind remain hives of activity. She provides a venue for discussion and debate and she personally offers practical refuge to those fleeing oppression. This defence of Truth, Justice and Kindness is the core of her Judaism.

Thus one of most moving aspects to A Family Conspiracy is Chesler’s own wrestling with the doubts and depression that such constant opposition induces.  It is not that she finds her enthusiasm flagging or overwhelmed by so much negativity and lack of empathy—even the forgetfulness by the next generations of young women of what Chesler stood up for and helped to bring into being—but whether she has the health and stamina to carry on.  Not Phyllis. She remains an inspiration to us all, old as well as young, those in the thick of things or those of hidden away on the other side of the globe.