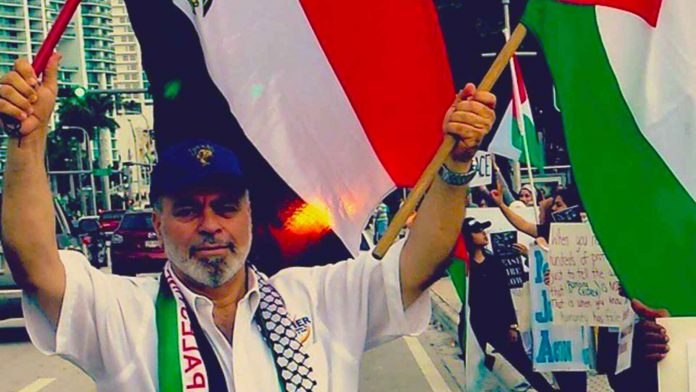 On April 3rd, the President of the American Muslim Association of North America (AMANA), Sofian Abdelaziz Zakkout, posted onto his Facebook page a photograph of himself posing with a Miami-Dade County policeman. He signed it “Sofian Zakkout, Director of Amana And Board of Directors of Miami Crime Stoppers.” Less than a week later, he posted a live video of global Hamas leader Ismail Haniyeh calling for the complete liquidation of Israel. This is one of a multitude of reprehensible actions done by Zakkout, yet Crime Stoppers continues to embrace him. Why?

Last June, Crime Stoppers of Miami-Dade County, Inc. filed an amended annual report for its non-profit corporation with the state of Florida, in order to add to the report the names of a new Treasurer and three Directors. The document was signed by the group’s Executive Director, Suzette Rice. One of the Directors added to the report was Sofian Zakkout. In truth, this was a formality, as Zakkout has been with Crime Stoppers for a number of years, but it does highlight his apparent importance within the organization.

Having Zakkout serve on the board of an anti-crime group poses a number of significant problems. These problems are the result of Zakkout’s support for terrorist groups and his virulently anti-Semitic behavior.

In July 2010, the Anti-Defamation League (ADL) condemned Zakkout and his group AMANA for featuring what the ADL called a “venomous” anti-Semitic video on the AMANA website. The video was produced by and featured white supremacist and former Ku Klux Klan Grand Wizard David Duke. Zakkout has since posted a number of Duke videos onto social media and has praised Duke as “David Duke, a man to believe in!” AMANA continues, to this day, to promote Duke on its official website.

In July 2014, Zakkout organized a pro-Hamas rally held outside the Israeli Consulate in downtown Miami. The rally goers repeatedly shouted, “We are Hamas” and “Let’s go Hamas.” As they do so, Zakkout is shown on video smiling proudly. After the rally, Zakkout wrote the following in Arabic, above photos from the event: “Thank God, every day we conquer the American Jews like our conquests over the Jews of Israel!” He signed it “Br. Sofian Zakkout.” The next month, Zakkout declared in Arabic, “Hamas is in my heart and on my head.”

In December 2015, Zakkout posted onto Facebook a blatantly anti-Jewish message over a photo of Israel Defense Forces (IDF) Chief of Staff Gadi Eizenkot, who is a decorated veteran of many wars and battles fought by Israel over the last three-plus decades. Above the picture of Eizenkot, Zakkout wrote in Arabic, “You’re a Jew, the grandson of a monkey and a pig.” He signed it “Sofian.” This is one of many times Zakkout has referred to Jews as “monkeys and pigs.”

In February 2016, Zakkout circulated on social media a report claiming that “the Holocaust was faked.” It begins: “The alleged ‘Holocaust’ of ‘6 million Jews’ at the hands of Adolf Hitler and National Socialist Germany during WWII is the biggest lie ever foisted upon humanity.” It was produced by The Realist Report, an anti-Jew, anti-black, anti-gay independent media outlet, which describes Hitler as “the greatest leader in modern Western history.”

In March 2016, Zakkout posted onto his Facebook page a graphic memorializing a number of deceased al-Qaeda leaders, including Osama bin Laden and al-Qaeda in Iraq leader Abu Musab al-Zarqawi.

In April 2016, Zakkout promoted a report discussing the false notion of Jewish involvement in the September 11th attacks on the World Trade Center and the Pentagon. A photo from the report shows the burning towers with a Jewish Star affixed to one. The report begins, “It ain’t debatable!… [T]he 9/11/01 terrorist attacks on New York City and Washington D.C. were an ‘Israeli’-Jewish job.” The website which published the report, Mouqawamah Music, openly calls for “Death to Israel” and labels the Jewish religion “wicked and filth-ridden.”

In July 2017, Zakkout posted on his Facebook page a four-minute portion of a speech given by Nation of Islam leader and rabid anti-Semite Louis Farrakhan, where Farrakhan repeatedly refers to Jews as “Satan.” On it, Farrakhan states, “Really, they’re not Jews. No, that’s Satan. You should learn to call them by their real name, ‘Satan.’ You’re coming face to face with Satan, the Arch Deceiver, the enemy of God, and the enemy of the righteous.”

And this month, on April 9th, less than one week after Zakkout bragged to his Facebook audience that he sits on the Board of Directors of Miami-Dade Crime Stoppers, he posted a live video of global Hamas leader Ismail Haniyeh calling for the complete liquidation of Israel. The video is of a Haniyeh speech about the recent Gaza protests. During it, Haniyeh declares to his audience, “We will break the walls of the blockade, remove the occupation entity, and return to all of Palestine.” The same day, Zakkout, himself, on Facebook, remarked about a toy kite – which contained on it the map of Israel – that it had, instead, “the entire map of Palestine.”

Given this evidence against him and so much more that this author could have placed in this article, including Zakkout’s past leadership in a Hamas-related charity, it is an outrage and beyond shame that Executive Director Suzette Rice and her Crime Stoppers division continue to embrace Zakkout and allow him to remain on the Crime Stoppers Board of Directors. Indeed, Zakkout’s support for terrorist groups and his anti-Semitic behavior: 1. should render him ineligible for such a position, 2. make him a threat to national security, and 3. call into question the validity of Crime Stoppers, itself.

It could be that Crime Stoppers is worried about a lawsuit, if the group chooses to dismiss him. If anything, though, Crime Stoppers should sue Zakkout for jeopardizing its mission and acting to undermine the organization’s values.

Zakkout’s activities as head of an extremist group like AMANA and glorification of terrorism and bigotry should be regarded as conflicts of interest and deemed “not conducive to the public good.” It is that simple. Suzette Rice and Crime Stoppers need to end this relationship immediately.