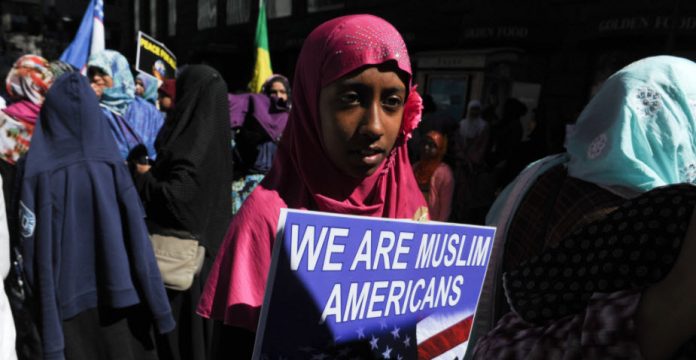 In 2007, in a highly controversial move, Keith Hakim Ellison, the first Muslim congressman, swore his oath of office on a copy of the Koran.  In effect, Ellison rejected the values that unify Americans and instead pledged to follow a religious text that commands Muslims to wage war against secular legal systems.

Today, swearing the oath of office on the Koran and even simultaneously praising Allah have become almost commonplace.  In 2016, Minneapolis Park Board member and Somalian refugee, A.K. Hassan took his oath on a massively oversized Koran and proclaimed his commitment to serve “in the name of Allah.”  In 2015, another Somali refugee, Ilhan Omar, elected to the Minnesota House of Representative, swore on the Koran, as did Carolyn Walker-Diallo, the first Muslim woman judge elected to Brooklyn’s 7th Municipal District, andAbdullah Hammoud, a Michigan state representative.

In “Muslim Brotherhood Political Infiltration on Steroids,” I described how as early as 1987, FBI information revealed that the Muslim Brotherhood – a Middle East political organization considered a terrorist organization by five Arab countries and Russia – was seeking to “peacefully get inside the United States Government” and accomplish “the ultimate goal of overthrowing all non-Islamic governments.”  Several M.B. front groups, including Project Mobilize; the United States Council of Muslim Organizations (USCMO); and Jetpac, Inc., had been created to politically exploit America’s Muslim community to achieve supremacist goals set forth in the Muslim Brotherhood’s strategic plan, theExplanatory Memorandum.

As if taking a cue from the memorandum, the executive director of the Council on American Islamic Relations (CAIR), Nihad Awad, spoke in January 2016, at the 14th annual Muslim American Society-Islamic Circle of North America (MAS-ICNA) conference in Chicago.  He urged Muslims to “[t]urn your centers, Islamic centers, mosques into registration centers for voters, into polling stations during election time.”

Awad intoned that American Muslims can determine “not only the future of you here but the future of America itself.”  In 2014, the United Arab Emirates identified CAIR and MAS as terrorist organizations.  CAIR, referred to as “Hamas doing business as CAIR” by former FBI supervisor and M.B. expertJohn Guandolo, had been previously identified as an unindicted co-conspirator in the HLF-Hamas funding trial.  ICNA was listed in the Explanatory Memorandum as one of the Muslim Brotherhood’s likeminded “organization of our friends” with the shared goal of destroying America and transforming it into a Muslim nation.

In Canada and Europe and to a more limited degree in the U.S., once devout Muslims are installed in political office, they push for anti-hate speech and anti-Islamopobia laws and even prohibitions against verbatim citing of Islamic texts.  In addition, since sharia-adherent Muslims are commanded to reject man-made law such as the U.S. Constitution, they must endeavor to replace secular law with Islamic doctrine under a caliphate or Islamic government.

Muslims in office also take positions against U.S. interests.  For example, Ellison represents “Little Mogadishu,” a neighborhood in Minneapolis with one of the highest concentrations of Somali Muslim refugees.  In 2015, despite active recruiting in his district by the East African terrorist group Al-Shabaab, and the arrest of several Somalis for attempted travel to Syria to join ISIS, Ellison ignored terrorist financing concerns and opposed efforts to curb cash transfers to Somalia.

Meanwhile, new Muslim candidates of questionable motivation and affiliation continue to run for office.  Since my previous article, two are in upcoming races, and one, who was momentarily unsuccessful, is likely to run again.

In Florida’s Broward County, Altaf Ahmed is running for county commissioner in an election to be held later this year.  In 2016, he tweeted his attendance at CAIR Florida’s 16th annual gala and included a photo of himself with Siraj Wahhaj, an unindicted co-conspirator in the 1993 World Trade Center bombing.  In 1992, Wahhaj said, “If only Muslims were clever politically, they could take over the United States and replace its constitutional government with a caliphate.”

Ahmed also praised the gala’s organizer, Nezar Hamze, a CAIR leader and Broward County sheriff’s deputy.  Hamze has denied the threat of Islamic terrorism and has conducted active shooter training at an al-Qaeda-associated Florida mosque.  He has been actively involved in Islamic Relief Worldwide, anorganization banned by the UAE, Israel, and several Swiss banks for funding al-Qaeda and Hamas.

Another questionable candidate for office, Ammar Campa-Najjar, is running for the 50th Congressional District in eastern San Diego County and Temecula, the seat currently held by Duncan Hunter.  Campa-Najjar’s grandfather headed the intelligence wing of Fatah, the organization responsible for the 1972 Munich Olympics massacre and other terrorist attacks against Israelis.

Campa-Najjar attended an Islamic school at the Masjid Abu Bakr in San Diego but claims to have converted to Christianity.  His views on the Middle East are confounding.  He says he appreciates Israel’s need for security but also proclaimsthat “Israel will have to acknowledge its wrongdoings as the sovereign state” and “Palestinians will have to renounce violence and fanaticism, acknowledge their Jewish neighbors and accept new realities.”

In the most recent presidential election, Campa-Najjar supported Bernie Sanders, who criticized Israel for its offensive war against Gaza following thousands of rocket attacks and questioned America’s level of support for Israeli security.

A third Muslim would-be politician, Dilara Sayeed, ran unsuccessfully as a Democratic candidate for the Illinois House’s 5th District and was endorsed by M.B. operative Ellison.  Sayeed recently spoke at a Muslim religious festival (Eid) dinner at the Loyola University Chicago Muslim Student Association and was honored by the Council of Islamic Organizations of Greater Chicago (CIOGC) at an event that featured M.B. and sharia-advocate, Dalia Mogahed, as the keynote speaker.

The Muslim Student Association, a rabidly anti-U.S., anti-Semitic, and anti-Israel group, is the first national Islamic organization established by the Muslim Brotherhood to indoctrinate and recruit Muslim students for terrorist organizations.  Meanwhile, CIOGC members include many M.B. front organizations, such as the Mosque Foundation (M.F.), which has held fundraisersfor individuals and groups associated with the terrorist organization Palestinian Islamic Jihad and Hamas; Islamic Relief USA, which has funded al-Qaeda; and the Muslim American Society, which has propagated materials that degrade women, curse Christians, and call for the murder of Jews and homosexuals.

With endorsements from the Chicago Sun Times and the Chicago Tribune and as a fellow of JetPac, an organization established as an “open call for American Muslims to immerse themselves in local politics,” Sayeed is likely to seek political office again and succeed.

Given the new Muslim candidates and their affiliations, and the likely emergence of even more such office-seekers, Ellison’s address at a 2010 MAS fundraiser, hosted by jihad supporter Esam Omeish, now seems an ominous warning.  Said Ellison, “And I am telling you, that with your help, we are able to take the Muslim presence on Capitol Hill from zero to a real player.  And this is what we’re trying to do and we got to do it in every state house in America … positioning Muslims in general to help steer the ship of state in America.”

Surely, the ongoing attempt to penetrate American society through political office so clearly documented in Muslim Brotherhood strategic documents published decades ago is proceeding apace.  Despite a stated objective to destroy the United States from within and replace its system of laws and values with Islamic doctrine or sharia, ignorance or willful blindness on the part of Americans insures that their goal is dangerously within reach.