Phillip Parrish, a Minnesota Republican gubernatorial candidate is being criticized for saying he does not consider Islam to be a faith and that it is “the antithesis of the Constitution.”

Finally, a national political candidate who gets the threat Islam poses to constitutional liberty. 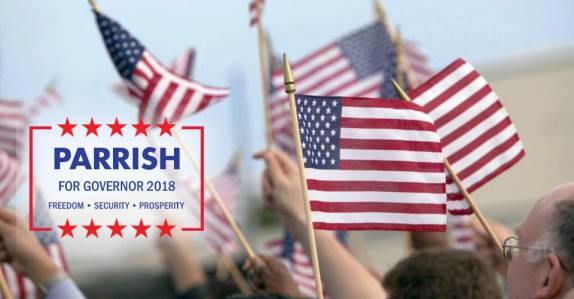 Of course, Parrish immediately drew criticism from the Red – Green Axis for the comments he made in an email to Community Interfaith Dialogue on Islam founder Regina Mustafa. Mustafa, of Rochester, MN sent Parrish an email inviting him to sit down with her after learning he had recently attended a meeting featuring Usama Dakdok, an outspoken critic of Islam.

“I do not object to you attending his presentation, but wanted to know if you would like to speak to a Muslim about Islam. Since you have attended this talk about my faith, I figured you would also like to hear from a person who actually practices Islam,” wrote Mustafa, according to reporting by Heather J. Carlson for The Post-Bulletin, Minnesota’s largest evening newspaper.

Parrish responded by saying he would be willing to meet but that “I separate Islam from the word faith because faith takes belief and Islam requires only submission.” He added that he would ask her to publicly denounce Sharia law and declare that “Islam, Sharia and the Quran are the antithesis of the U.S. Constitution.”

As we have pointed out on these pages many times before, Islam, as it is practiced by millions of Muslims who believe in the supremacy of Islamic law – Shariah – is not a religion as those of us raised in the traditions of the Western Enlightenment would define the term.

It is a totalitarian political system that seeks to regulate the minutest details of the lives of its adherents, while bestowing absolute power upon its self-appointed leaders. Islam is thus, in the words of Daniel Pipes, “transformed from a personal faith into a ruling system that knows no constraints” and is inimical to the separation of church and state and government based on constitutional liberty. It is the polar opposite of constitutional liberty.

Naturally, Parrish’s response drew sharp criticism from the usual laundry list of Leftwing Sharia apologists. The Southern Poverty Law Center wrote about Parrish’s comments on its “Hatewatch” blog and Muslim Advocates, claimed “Anti-Muslim bigotry like this emboldens those who would discriminate or commit acts of violence against Muslims. We’ve seen hate crimes, violence, and bigotry skyrocket as politicians have increased their attacks on Islam and Muslims.”

In a press release quoted by Ms. Carlson, Parrish pushed back, saying he has no intention of leaving the race and accused Mustafa of making a “disingenuous request” to meet with him in order to advance her own propaganda.

“I see myself as a person attempting to expose those who are attempting to set up rules and laws and regulations contrary to the U.S. Constitution,” Parrish said according to Ms. Carlson’s reporting.

As a U.S. Naval intelligence officer, he said he has extensive knowledge of Islam.

Mr. Parrish is right, and as we have made the case in many articles on the threat Islam poses to constitutional liberty, it is that political goal of imposing an anti-constitutional system of government through political subversion and terrorism that requires a forceful government response: “We Can – And Should – Ban Most Muslim Immigration To America,” “Still No Religious Test For Immigration Mr. Speaker?” “It Only Takes One: Why We Must Stop Importing Jihad Through Muslim Immigration.” “Homegrown Muslim Terrorism Fueled By Obama – Bush Immigration System,” “America’s Suicidal Muslim Immigration Policies,” “Importing Jihad” and “Why Do We Let These Vipers Into America?”

We are in a war of ideas, not just with radical Islamists, but with concepts deeply embedded in Muslim culture. And as long as mass legal (and illegal) immigration from Muslim countries continues unabated we are losing that war.

Mr. Parrish’s statement about Islam was not wrong from either a legal or national security perspective.

The problem for those in the establishment media and establishment political parties is they don’t want to do the work necessary to investigate the threat, because they already know what it would reveal. It would reveal that hundreds of thousands of recent Muslim immigrants and millions of U.S. Muslims are indeed a security threat, because they agree with San Bernardino Muslim jihadi terrorist Syed Farook that Islam will rule the world, and that Shariah, not the Constitution, is the supreme law by which all in America should live.

To learn more about Phillip Parrish’s campaign for Governor of Minnesota go to https://parrish4mn.com/.

George Rasley is editor of ConservativeHQ. A longtime student of Islam he has lived and travelled extensively in the Muslim world. Rasley served on the staff of Vice President Dan Quayle, as Director of Policy and Communication for Congressman Adam Putnam (FL-12) then Vice Chairman of the Oversight and Government Reform Committee’s Subcommittee on National Security and Foreign Affairs, and as spokesman for Rep. Mac Thornberry now-Chairman of the House Armed Services Committee.