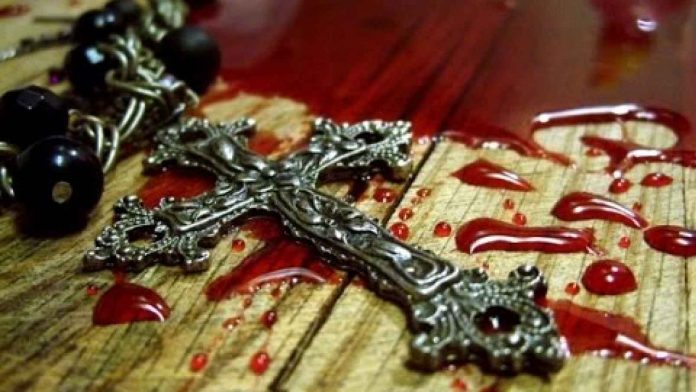 Around 30 Muslim herdsmen stormed a church during early morning mass and massacred nearly 20 parishioners and two clergymen on April 24 in Nigeria.

Rev. Fathers Joseph Gor and Felix Tyolaha were slaughtered while officiating at the altar of St. Ignatius Catholic Church in Mbalom village, Benue. Worshippers were gathered in the church for the daily 5:30 a.m. service when they heard gunshots.

“People started scampering and wailing,” said Terhemen Angor, a local resident. Several people were “gunned down in cold blood while many sustained injuries including bullet wounds… After attacking the church, the invaders descended on the community and razed over 60 houses. The community is on fire and deserted, people are fleeing to neighbouring villages hoping to find a safe haven for their families.”

As in similar occurrences, “concerted efforts to get [a] reaction from the Benue Police Command failed,” according to Vanguard News. As far back as January 3, and further indicative of the authorities’ indifference, one of the slain reverends, Fr. Gor had written on Facebook, “Living in fear. The fulani herdsmen are still around us in Mbalom. They refuse to go. They still go grazing around us. No weapons to depend on ourselves.”

“In their classic style they burn down homes, destroy food items and kill,” a statement concerning this latest atrocity from the local Catholic diocese read. “The police seem to know nothing of the attacks which have been going on in other villages within Benue State.”

The statement suggests that Fulani herdsmen attacks are part of the anti-Christian jihad in Nigeria that is more commonly associated with the Islamic terror group, Boko Haram:

Many people are asking why the International community has remained silent over the massacre of Benue citizens? The answer is simple: It has been the goal of the jihadists to conquer Benue and Tiv people who resisted their advance into the middle belt since 1804; the [Christian] people who rejected Islam and fought for the unification of Nigeria in the civil war of 1967 – 1970… [T]he Muslim North is enjoying a sweet revenge overshadowed by an insensitive regime…. The diocese has been active in providing relief materials including education and skills acquisition lessons. To go for the priests means total destruction of everything we stand for and believe in!

The frequency and deadliness of Muslim herdsmen raids on Christian farmers is “now more deadly than the Boko Haram jihadist insurgency that has ravaged Nigeria’s northeast,” reports Agence France-Presse.

“I have just returned from Nigeria where over 100 Christians were killed in the 2 weeks I was there. The killings are now weekly and this isn’t even Boko Haram!” a leading human rights lawyer, Emmanuel Ogebe, whose hometown is the site of this latest massacre of Nigerian Christians and their priests, told Gatestone.

The Fulani Herdsmen are jihadists who invaded the region in 1804 and imposed a puritanical form of Islam. It is impossible to separate their antecedents from their present. More than just a land dispute, the attacks on an American mission compound last month and today’s attack on a church service are indicators of the Islamist extremism driving this genocide.

The Boko Haram and the Fulani “are not only allies but have collaborated on attacks in Nigeria,” continued Ogebe. “It is no coincidence that both are now waging jihad on Nigeria given their long history.”

Many Christians in Nigeria accuse its president, Muhammadu Buhari of being complicit. Although he publicly condemns the ongoing massacre by Fulani herdsmen of Christians, they contend that he does nothing to stop them. Ogebe goes further with his accusations:

Buhari, who is himself from the jihadists’ Fulani tribe, has filled his security council with his kinsmen. He infamously refused to visit Benue State after the New Year’s Day Massacre that claimed over 70 lives then commanded the state governor to go and “accommodate” the Fulani Herdsmen who had killed his people. The minister of defense has justified the killings and General Buhari’s Government condones and sometimes outrightly supports the Herdsmen. Worse still, General Buhari is a life patron of one of the Herdsmen associations that has claimed some of the attacks.

Asked if he could relay a message to the White House, Ogebe said:

General Buhari is presiding over a low-grade genocide perpetrated by his Fulani Herdsmen tribe. He must be told to fish out the murderers of Rev Fathers Joseph and Felix and bring them to justice. The killings must stop. US should halt aircraft sales to Nigeria until these attacks are halted and the perpetrators convicted.

More on Emmanuel Ogebe and his work on behalf of Nigeria’s persecuted Christians can be read here; he can be contacted at justiceforjos@gmail.com.