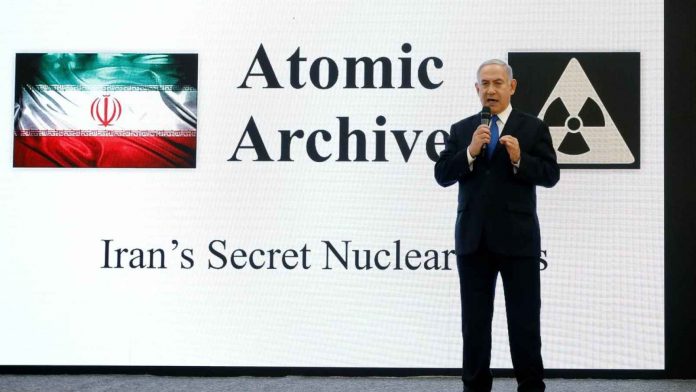 Israel now has proof of what many suspected all along about the disastrous nuclear deal that former President Barack Obama reached with the Iranian regime. “Iran did not come clean on its nuclear program,” Israeli Prime Minister Netanyahu charged, claiming that more than 100,000 Iranian documents Israel’s intelligence agents obtained from a secret “atomic archive” in Tehran prove the nuclear deal is “based on lies.” This latest development should make President Trump’s decision to withdraw from the nuclear deal a no-brainer.

“Prime Minister Netanyahu gave a powerful presentation today of compelling new evidence documenting Iran’s determined pursuit of a nuclear weapon,” a senior Trump administration official said, as quoted by the Free Beacon. “It certainly would have been helpful to have this information when the JCPOA [Joint Comprehensive Plan of Action] was negotiated but the Iranians decided to lock it away in a secret vault for future reference. Only the regime knows what else they’re hiding, but the revelations today don’t give us much confidence in their protestations that they have never had interest in militarizing their nuclear program.”

The “atomic archive” documents reportedly reveal details about a hush-hush nuclear weapons plan known as Project Amad that began back in the early 1990’s. It was supposedly shut down in 2003, but, in actuality, the project work was carried on under different guises with the same Iranian scientists involved. The work has focused on what the prime minister said were five elements. As described by the Times of Israel, these elements consisted of “designing nuclear weapons, developing nuclear cores, building nuclear implosion systems, preparing nuclear tests and integrating nuclear warheads on missiles.” Since the flawed nuclear deal itself did not directly address Iran’s ballistic missile research and development program as it should have, Iran has felt free to work on perfecting the technology for nuclear warhead missile integration.

“Even after the deal, Iran continued to preserve and expand its nuclear know how for future use,” Prime Minister Netanyahu pointed out, no doubt having the deal’s sunset clauses in mind. As Debkafile commented, “The material presented by the prime minister demonstrated that Iran’s nuclear program had been secretly stored intact for use at a time of its choice and posed an ever-present peril.”

Iran has played the International Atomic Energy Agency (IAEA), the UN watchdog which has repeatedly given Iran a clean bill of health for supposedly complying with its commitments under the nuclear deal, known formally as the Joint Comprehensive Plan of Action or JCPOA for short. Iran misled the IAEA into believing that Iran had discontinued the use of any technology for developing nuclear weapons.

Iranian Foreign Minister Mohammad Javad Zarif mocked Prime Minister Netanyahu, tweeting, “The boy who can’t stop crying wolf is at it again… You can only fool some of the people so many times.” Zarif is right about only being able to fool some of the people so many times, but his comment applies to the Iranian regime itself. The regime fooled Obama and Kerry, who in turn sold a bill of goods to Congress and the American people. President Trump is not so easily fooled.

Indeed, President Trump now has the proof he needs to announce withdrawal from the JCPOA on May 12th, reimpose harsh sanctions for Iran’s lies to the IAEA and other deceptions, and at the same time send a message to the North Korean regime that he will not tolerate a meaningless paper agreement in his negotiations with Kim Jong-un. As the president noted in response to the evidence of Iran’s lies, it “really showed that I’ve been 100 per cent right. That is just not an acceptable situation.”

Meanwhile, missile attacks in Syria Sunday evening struck two pro-Iranian Shiite command centers, including a depot with 200 Iranian missiles said to have been slated for transport to Hezbollah. Reportedly, eighteen Iranians were killed, including a senior officer. Israel has not claimed responsibility. However, Israel may be girding for a Hezbollah attack from the north, or possibly for a direct attack by Iran itself. According to Debkafile, there has been unusually heavy Israeli military traffic spotted going north. Israel has also announced that its northern airspace will be closed to civilian flights until the end of May.

As reported by the Washington Times, “Israeli defense officials have told their American and Russian counterparts that if Iranian-backed forces attack Israel from inside Syria, Jerusalem will not hold back from retaliating with direct strikes against Tehran or other targets in Iran.” Iran’s nuclear facilities may well top the target list.