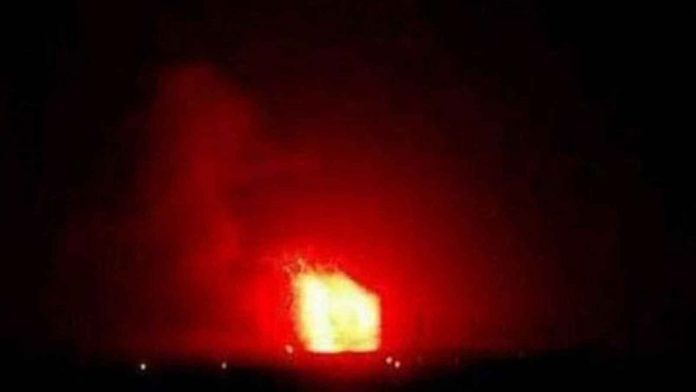 On Sunday, in the late evening hours, a mysterious explosion rocked an army base belonging to Bashar Assad’s 47th Brigade near the city of Hama. Other targets near Aleppo were also reportedly hit. The blast at Hama was so powerful that it generated massive seismic activity, registering 2.6 on the Richter magnitude scale according to the European Mediterranean Seismological Center.

But this was no earthquake. It was a precision military strike aimed at destroying a large cache of missiles recently airlifted by Tehran from Mehrabad airbase to Hama’s military airport, through Iraqi airspace. Iran effectively controls Baghdad making the task of illegally transporting contraband through Iraqi airspace a rather simple affair.

According to reports, the strike hit pay dirt, igniting a stockpile of some 200 rockets and missiles, including anti-aircraft missiles, and generating a series of enormous secondary explosions. According to the Syrian Observatory for Human Rights, at least 40 pro-regime mercenaries were killed in the blasts and some 60 were wounded. The SOHR noted that the death toll could climb. The semi-official Iranian news agency INSA reported that at least 18 Iranians were killed including a commander, a claim swiftly denied by the Islamic Republic, which for obvious reasons doesn’t like to advertise its losses or show images of its elite troops coming home in body bags. Satellite images of the site taken shortly after the blasts revealed widespread destruction with at least 13 buildings either severely damaged or leveled entirely.

Iran and Syria initially blamed Israel for the attack but swiftly backtracked claiming that the attack was carried out by the United States and Britain. Some conspiracy theorists have even suggested that the Russians were responsible. These claims are dubious at best and in all likelihood, the attack was executed by the Israeli Air Force, a claim corroborated by three unnamed U.S. officials according to NBC. The Iranian/Syrian vacillation concerning assignment of blame remains a mystery.

Israel, which has carried out over 100 strikes in Syria in recent years, has no interest in being dragged into the Syrian quagmire but has set its own red lines that if crossed, would trigger a robust military response. Israeli leaders have repeatedly warned that they would not tolerate the transfer of sophisticated weapons to Hezbollah, Iran’s proxy militia that effectively controls Lebanon. More importantly, Israel is concerned about Iranian entrenchment in Syria and the possibility that Iran is seeking to open up another front against Israel.

Israeli fears are not unwarranted and have been proven correct. In Mid-February, the Iranians sent an explosive-laden drone, modeled after a captured American RQ-170, into the Jordan Valley. The UAV, which was being tracked by the Israelis from the moment it was launched, was promptly shot down by an Apache attack helicopter of the 113th Squadron. Israel then struck and destroyed the UAV’s control vehicle but an F-16 was shot down in the process. Both pilots safely ejected. Israel responded by destroying 1/3 to 1/2 of Syria’s surface-to-air missile batteries and further struck four Iranian bases.

In early April, Israel struck the T-4 airbase near the Syrian city of Homes severely disrupting Iranian drone operations in Syria. According to the SOHR, at least 14 people, including Syrian army personnel were killed. Iran admitted to the loss of 7 Iranian Revolutionary Guard Corps operatives including a colonel who was in charge of Iranian drone operations in Syria.

The heightened tensions come amidst the revelation of an astonishing Israeli intelligence coup. Early this week, Prime Minister Benjamin Netanyahu revealed to the world that Israeli intelligence agents (probably belonging to the Mossad) had seized a half-ton worth of documents and CDs containing top secret information regarding Iran’s opaque weaponized nuclear program that the Islamic Republic tried to conceal from the IAEA and the international community. The documents were seized from a highly secure facility in Tehran, which was only known to a few high-level Iranians, “and a few Israelis,” as Netanyahu dryly noted with a satisfying grin.

The Mossad’s intelligence coup resulted in a second ancillary achievement. It succeeded in sowing discord and suspicion within the highest echelons of the mullah establishment. The news of the Israeli action was greeted in Tehran with a wave of arrests. The mullahs are pointing accusatory fingers at each other with no one willing to accept responsibility for the embarrassing fiasco.

As part of the Joint Comprehensive Plan of Action, Iran’s leaders were required to come clean about their past nuclear activities but they blatantly lied when they asserted that they had no weaponized nuclear program, an assertion flatly contradicted by the seized documents. The entire deal was thus premised on a lie. Moreover, the documents show that Iran violated clause T82.1 of the JCPOA which prohibits Iran from engaging in “activities which could contribute to the development of a nuclear explosive device.” Iran’s retention of this technology and its attempts to conceal it from inspectors by transferring it to secretive locations constitutes a serious breach of the agreement.

President Trump has sought to modify the agreement by ending the JCPOA’s sunset clauses on Iranian uranium enrichment, allowing unfettered inspections of sites like the highly opaque Parchin facility, which is currently off limits to inspectors, and curbing Iranian ICBM testing and development. Given Iran’s penchant for lying (confirmed by the seizure of the documents) and its increased aggressive stance and malign influence on five continents, these demands are quite reasonable.

On May 12, Trump is set to decide whether the United States will pull out of the JCPOA. The daring Israeli operation has exposed Iran for what it is and has undoubtedly tilted the balance heavily in favor of those who believe that the Iran deal, standing as is, has harmed rather than helped the cause of world peace.