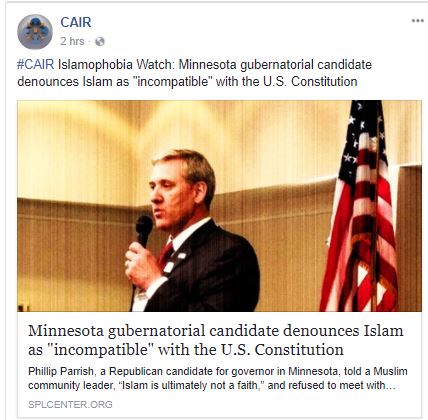 According to the SPLC:

Regina Mustafa, founder of the Minnesota-based Community Interfaith Dialogue on Islam, reached out to Parrish after learning he attended a talk by Usama Dakdok called “Revealing the Truth about ISIS.” Dakdok is one of a number of anti-Muslim speakers who have created a cottage industry touring the country to malign Islam as an inherently violent religion. In his Minnesota presentation, Dakdok said ISIS was the “true representation of Islam.”

Mustafa sent Parrish an email, offering to meet with him face-to-face. “Since you have attended this talk about my faith,” she wrote, “I figured you would also like to hear from a person who actually practices Islam.”

In Parrish’s reply, he condemned Islam as fundamentally incompatible with U.S. law.

First, he claimed to have, “a very unusual in-depth level of training, experience, and understanding regarding multiple faiths and the practice of Islam,” which he has suggested in public interviews is related to his time in the U.S. Naval Reserve working in intelligence.

He continued, “I separate Islam from the word faith because faith takes belief and Islam requires only submission. I will not participate in any faith dialog because Islam is ultimately not a faith.”

Parrish demanded Mustafa “publicly denounce Sharia and swear to adhere to, protect, comply with, accept, and defend the United States Constitution.” He suggested that as a practicing Muslim — or as he put it, “practicing Islamist” — she would be unable to do so. He also wrote, “Islam, Sharia, and the Quran are the antithesis of the U.S. Constitution.”

From the Center for Security Policy: Shariah Law vs. the Constitution

I’ve seen Phil Parrish speak at a GOP event in Minnesota. He’s a serious candidate. Check out his website.  Follow him on Twitter and Facebook. Send a message to all the gutless politicians out there. Send him some money today.

This man is smart and courageous. He deserves your support wherever you live in the United States.