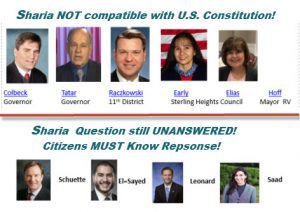 Abdul al-Sayed to GOP opponent: ‘You may not hate Muslims but Muslims definitely hate you!’

Michigan’s first-ever Muslim candidate for governor, Dr. Abdul al-Sayed, took a shot at fellow gubernatorial candidate Patrick Colbeck on Thursday that some Republicans are saying was below the belt.

Colbeck, speaking at a candidate’s forum in East Lansing, expressed his concerns about Sharia law and the extremist Muslim Brotherhood’s tactic of civilization jihad. Colbeck took exception with an article he says was planted by Sayed supporters in the left-of-center website Buzzfeed,  which painted Colbeck as a fringe extremist using “unfounded conspiracy theories” against Sayed.

Sayed, 33, the former public-health director for the city of Detroit, was on stage Thursday at the Michigan Press Association with several other Democrat and Republican candidates for governor running in the Aug. 7 primary.

Sayed refused to answer a question from the moderator about the Islamic legal system known as Sharia, other than to say that, if elected, he would uphold the constitutions of the U.S. and State of Michigan.

“I take [the Constitution] particularly seriously because it guarantees me two things. A, the right to pray as I choose to pray, and for me that means I put my face on the ground 34 times a day,” Sayed said.  “Some people choose not to pray at all. Then in Article Six it also tells us that no religious test should be held over someone wishing to serve under this Constitution. It’s an incredible document.”

Sayed leveled charges of racism and “white supremacy” at Republicans in general but saved his most severe critique for Colbeck, the one GOP candidate who has dared to talk about the issue of creeping Sharia in a state that has the country’s highest concentration of Muslims and has the nation’s first case of female genital mutilation working its way through the federal courts. Michigan also recently had a case involving a possible honor killing in which a 15-year-old Muslim boy in Farmington Hills allegedly pushed his mother to her death at a time when she was going through a divorce from his father.

Colbeck, an aerospace engineer and two-term state senator, said his concerns are not about individual Muslims. Rather, he worries about the influence of the Muslim Brotherhood, which has been declared a terrorist organization by Egypt, Saudi Arabia and the United Arab Emirates, and whose influence in the U.S. was spelled out in the Explanatory Memorandum on the General Strategic Goal for the Group in North America, a document seized by the FBI in 2004 and presented as evidence in a terror-financing trial that sent five members of an Islamic charity called the Holy Land Foundation to prison in 2008 for funneling money to Hamas.

After he berated Colbeck as a racist, and lectured the other Republicans on the panel for not condemning Colbeck as a racist and white supremacist, the normally cool-headed Sayed became visibly angry and showed he is not above expressing some hatred of his own.

“What frustrates me more is not that you have blatant racism on the part of certain people, but what frustrates me more is in the words of Dr. Martin Luther King, is not when bad people speak out but when good people fail to speak out, and what I have not heard is the Republicans on this panel, decisively and swiftly call out this kind of Islamophobia, this kind of racism, in the context that they are wanting to represent the state that has the highest per-capita number of Muslim Americans in the country. Now you may not hate Muslims, but I’ll tell you, Muslims definitely hate you!”

Watch the full 6-minute exchange between Colbeck and Sayed in the video below:

Dick Manasseri, spokesman for Secure Michigan, one of the groups that has concerns about the incremental advancement of Sharia in Michigan’s Muslim enclaves, including female genital mutilation, honor violence and polygamy, said he was surprised to see Sayed come unhinged in response to a calmly-communicated concern by Colbeck.

“Dr. Abdul definitely lost his cool,” Manasseri said. “I think what we saw was an outburst. Abdul was not cool. Patrick is purposely trying to not make this his only issue, but when it comes up he’s not afraid to address it and Dr. Abdul showed he just can’t handle it. All he has in his bag of tricks is the canned response that everyone who asks about Sharia is a racist and an Islamophobe.”

Since Islam is not a race, and some of the most populous Muslim countries such as Syria and Bosnia are filled by Caucasians, the charge of racism is disingenuous at best, nonsensical at worst, Manasseri said.

The International Muslim Brotherhood’s stated goal, in its documents and even its motto, is the worldwide establishment of Sharia law, not necessarily by violence but by using “the hands of the unbeliever” in Western societies, Haney said. In essence, they use the political systems and the freedoms, of speech and religion, to infiltrate and weaken a Western society “from within,” as stated in the Explanatory Memorandum authored in 1991 by Brotherhood member Mohamed Akram.

Sayed served as vice president of the Muslim Student Association while attending the University of Michigan, and his wife Sarah served as president of the chapter. The MSA has long been linked to the Muslim Brotherhood and is named as one of its front groups in the Explanatory Memorandum.

Haney said Sayed responded like a trained Muslim Brotherhood operative when confronted with the issue of Sharia at Thursday’s candidates’ forum.

“He did what those guys tend to do, which is to change the narrative whenever the issue of Sharia comes up and make it about racism and so-called Islamophobia,” Haney said. “But he showed his true colors there at the end. He’s not as slick as he thinks he is.”

Manasseri said one of the most revealing moments of the forum was how the other two leading GOP candidates – Attorney General Bill Schuette and Lt. Gov. Brian Calley – sat silently throughout the entire exchange about Sharia.

“He’s standing there on the stage attacking their party as white supremacists and racists. And the current attorney general and the current lieutenant governor have nothing to say about it,” Manasseri said. “The press is mostly silent. If the man’s head touches the ground 34 times a day, this is not a casual Muslim we’re talking about, this is a fundamentalist Muslim. I’m concerned now. The press should be asking him: How do you feel about FGM, what are your views on forced veiling of Muslim women and honor violence against women?”

Patrick Colbeck has two decades of private sector experience as an aerospace engineer and was elected in 2010 to the Michigan State Senate. He was a senior design engineer with Boeing on the International Space Station. He also served as a systems engineer at the Department of Defense where he worked on advanced training simulation systems responsible for integrating these systems across the various branches of the Armed Forces.

Listen to Colbeck in his own words below [he hardly sounds like a racist]:

Leo Hohmann is a veteran journalist and author of the 2017 book “Stealth Invasion: Muslim Conquest through Immigration and Resettlement Jihad.” If you appreciate this type of original, fact-based and independent reporting, please consider a donation of any size to this website. We accept no advertising and are beholden to no one.