A man was slashed with a broken bottle following an argument in central Jerusalem on Wednesday, authorities said.

The assailant was arrested at the scene. Police said the motive for the attack was not immediately clear.

“Officers who were nearby subdued the suspect, who apparently injured another man with a glass bottle,” police said.

“The suspect is in police custody and is being questioned,” police said.

The stabbing occurred at a tram stop at Jerusalem’s Safra Square, between the Old City and city hall.

“Forensic teams are at the scene,” police said in a statement. 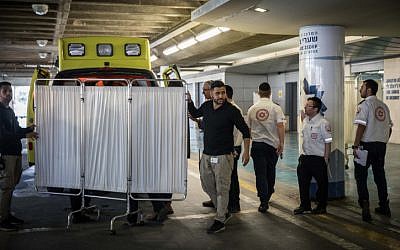 The Magen David Adom ambulance service initially said the victim, 32, was moderately injured in the attack, sustaining multiple stab wounds to the upper body. But after the victim was brought to Jerusalem’s Shaare Zedek Medical Center, his condition improved to lightly wounded, a hospital spokesperson said.

“A wounded 32-year-old man was brought to the [Shaare Zedek] trauma center from the event in Safra Square with superficial stab wounds to his upper body,” the hospital said.

MDA medics who treated the victim said he was fully conscious when they arrived at the scene. They bandaged his wounds and gave him IV fluids en route to the hospital.