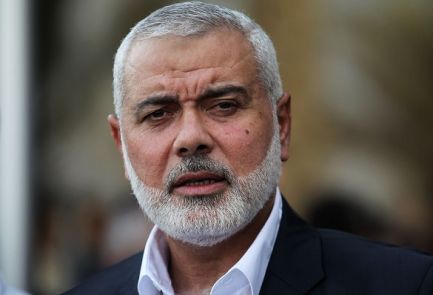 Ismail Haniyeh is summoned urgently to Cairo by Egypt’s intelligence chief, told to halt riot campaign on Israel-Gaza border • Official: Haniyeh “told, in no uncertain terms, that the blood of the dead was on his hands” and “history won’t forgive Hamas.”

Israel has repeatedly warned Gazans against approaching the security fence, saying it will not tolerate attempts to breach the border.

The official said Egyptian officials were stunned by the high number of casualties and angered by information provided by Israel that proved Hamas was paying civilians, including children, to place ‎themselves in harm’s way by approaching the fence ‎and clashing with IDF soldiers so as to allow Hamas ‎operatives to blend into the crowd and try to ‎carry out terrorist attacks.

Egyptian intelligence officers had also learned that the other terrorist groups in Gaza were also critical of Hamas’ provocations on the border, to the point of raising concerns that the enclave was on the brink of an internal confrontation that would plunge it into total chaos.

“Ismail Haniyeh and two bodyguards arrived in Cairo by helicopter within an hour of being summoned. But anyone who says Egyptian intelligence was honoring him by sending a helicopter to get him is wrong – they were furious with him,” the senior official said.

“Kamel ‎then kept Haniyeh waiting outside his office. It was humiliating. When Haniyeh was finally called in, you could hear him [Kamel] yelling. Haniyeh didn’t dare answer back.

“Haniyeh was told, in no uncertain terms, that the blood of the dead was on his and [Hamas military leader Yahya] Sinwar’s hands. They even showed him images of Hamas operatives paying teenagers to go die near the fence.”

Haniyeh was also warned that if the group continues instigating border riots, Israel may restore its policy of targeted assassinations, and if that occurs, Egypt and other Arab nations trying to defuse the situation would suffice with declarative condemnations.

“Kamel demanded that Haniyeh order his people to cease the border riot campaign immediately. It was a very stern message,” the official said.

It is believed that this meeting was what prompted Hamas to pull back some of its operatives from the border on Monday night. As a result, the ‎Nakba Day demonstrations on the border on Tuesday, marking the “catastrophe” of ‎Palestinian ‎‎displacement during Israel’s 1948 War of ‎‎‎Independence, were far less violent than expected.

“Kamel’s decision to step in and defuse the situation in Gaza followed messages from both Hamas and Israel,” another senior Egyptian official said.

“Hamas had offered a hudna [temporary truce] but rejected any possibility of relinquishing its weapons, while Israel sent a stronger message, saying it will not allow Hamas to instigate violence and trigger an escalation that could destabilize the entire region, including Egypt.”