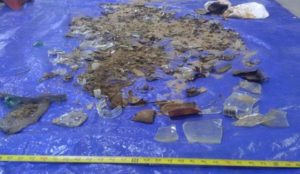 There are several possibilities here. One is that there are Muslims who threatened jihad violence against the beach, and who then planted glass shards and sewing needles all across it. Another is that non-Muslim hoaxers wrote the “Islamic Revolutionary Force” threat letter, and then planted the glass and needles on the beach. A third possibility is that one group, whether Muslim or non-Muslim, issued the “Islamic Revolutionary Force” letter, and another saw it and thought they would have some fun by putting the glass and needles on the beach.

In any case, this kind of thing never happened before jihad terror became a commonplace feature of life in the West.

“Bracebridge temporarily shuts down 2 beaches after disturbing discovery,” by Shallima Maharaj, Global News, May 21, 2018 (thanks to Michael):

The May long weekend attracts thousands of beach lovers to Ontario’s cottage country, but this year two popular destinations were temporarily closed.

Kirby’s Beach and Bracebridge Bay Park were closed after glass shards and sewing needles were discovered.

Brad Hammond’s home is nestled along the waterfront at Kirby’s Beach.

Hammond said this is the first time he’s seen the beach closed.

Several weeks ago, hazardous objects began turning up. Hammond’s wife spent eight to nine hours combing the beach herself and managed to fill a pail with her finds.

“It was pretty much the width of the beach but it was in clumps, so you could tell it had been seeded in different areas,” he said of the objects.

Residents have collected items from as far away as 60 feet from the shoreline….

Bracebridge Mayor Graydon Smith said the discovery of the needles and glass goes beyond what municipal staff would typically encounter after a spring melt.

What remains unclear is who is responsible.

Ontario Provincial Police (OPP) are now investigating the discovery and whether it may be linked to a disturbing letter that was mailed to the local newspaper, the Huntsville Forester.

The letter threatened the safety of beaches in the Muskoka region. It was titled “A Message from the Islamic Revolutionary Force,” although its legitimacy has yet to be confirmed by police.

Glass shards were also found on at least one beach in Gravenhurst last month.

Police have not confirmed any correlation between the letter and the appearance of the hazardous materials.

“Yes we have destroyed your beaches over the winter months with snowmobiles,” the letter reads, “making them unsafe and all but unusable.”

It claims the region makes for “easy targets.”

The letter, which was received by the paper on May 11, was then forwarded to the towns of Bracebridge and Gravenhurst. It was then sent to the OPP.

“I don’t know the legitimacy of it and it’s not my place to figure that out. It’s theirs [police],” Smith said. “So it’s in the right hands, so we’ll work with them to make sure that they get everything they need to make a determination of its legitimacy or if it’s just a hoax.”