America wants a better future for the Palestinians, Friedman says. If they don’t even come to the table, ‘I can’t imagine that would be well received in the White House’

Although the United States is “incredibly close” to Israel, it is nonetheless “an honest broker” in the Israeli-Palestinian conflict, US Ambassador to Israel David Friedman said Wednesday, and added that he was “pretty confident” that President Donald Trump could bring the parties to a peace deal.

Interviewed on Israeli television’s Hadashot news in his new office at the embassy in Jerusalem, Friedman said he believed the Palestinian leadership “will have no choice but to pursue” the much-hyped Trump peace plan if the proposal can offer “a better future, more optimistic, more promising future to the Palestinian people.”

Asked whether he was confident Palestinian Authority President Mahmoud Abbas would respond positively to the proposal, and constituted a partner, however, Friedman sounded less certain. He said he was “concerned and disturbed” by some of the things Abbas has said and done, but also that it was a “decision for the Palestinian people. We don’t pick fights with the Palestinian leadership. We try to support the Palestinian people.”

Reminded that Abbas had recently described him as “a son of a dog,”Friedman shrugged off the insulted, saying, “I have a very thick skin.” Abbas and the PA have been boycotting the US administration since Trump recognized Jerusalem as Israel’s capital in December. 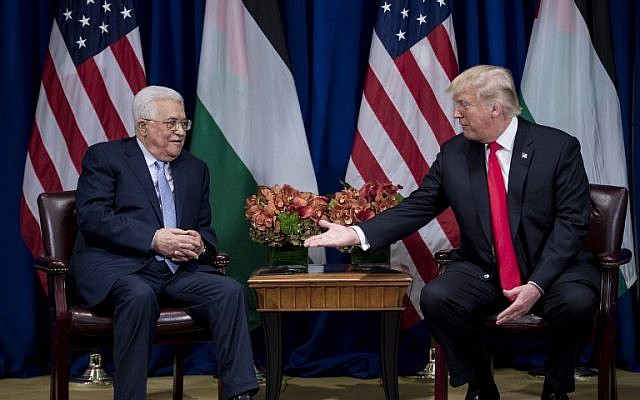 As for Benjamin Netanyahu, he said he had “worked very closely” with the prime minister, and called him an “extraordinary leader.”

Said Friedman: “If the prime minister thinks that what’s being proposed is in the best interests of Israel in its totality, I have no doubt that he’ll move in that direction.”

He noted that Israelis leaders, as representatives of a sovereign nation, could “speak to us candidly about what they can and can’t live with. And we would respect that.”

He made plain that the US would not be imposing terms on the sides, but said that if the Palestinians refused to even sit down and discuss peace terms, “I can’t imagine that would be well received in the White House.” 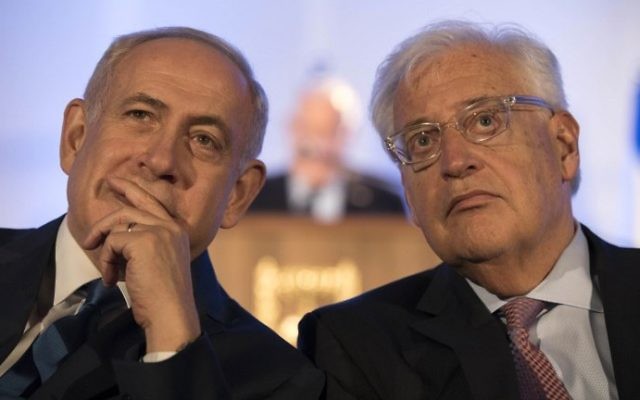 Prime Minister Benjamin Netanyahu (L) and US Ambassador to Israel David Friedman attend the ceremony marking the 50th anniversary of the 1967 Six Day War in the Old City of Jerusalem on May 21, 2017. (AFP Photo/EPA Pool/Abir Sultan)

“We are an honest broker,” he insisted. “We are incredibly close to Israel. We have an important relationship there. They’re one of our most important allies. But that doesn’t mean we cannot help to bring the parties to a peace deal,” he said, adding that he was “pretty confident” of success.

Asked whether it might have been smarter not to open the embassy in conjunction with Nakba Day demonstrations, which saw more than 60 Palestinians — some 50 of them Hamas members — killed in clashes with the IDF at the Gaza border, Friedman said Hamas was determined to make trouble on whatever day would have been chosen to inaugurate the embassy.

“I don’t know that there would have been any other date that would not have provoked what we saw,” he said. Hamas was determined “to take advantage of this [embassy] opening” in order to cause as much “mayhem” as it could.

Pointing to the new seal on the wall at the entrance to the embassy, which cites his name, Friedman said he was immensely proud to have presided over the relocation of the embassy and had made two copies of the seal — one of himself and one for Trump for the Oval Office. These were paid for, he said, with his own money, “one for him, one for me.” 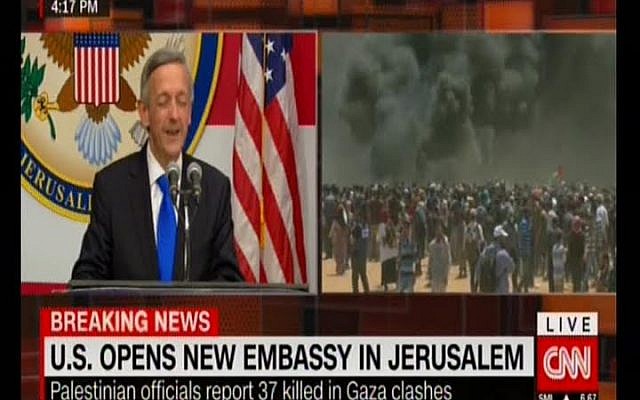 CNN shows the US embassy opening in Jerusalem on a split screen with violence on the Gaza border, May 14, 2018 (Screenshot)

In a separate interview with Channel 10 news, Friedman urged for Trump to be given time to strike a peace deal. “He hasn’t failed on the ultimate deal; he’s working on the ultimate deal,” he said. “It’s certainly too soon to write the postmortem on that.”

He said Trump was an optimist on the issue, with “better powers of persuasion than anyone I’ve ever met.”

Friedman also said the decision to move the embassy was Trump’s, and that he recalled the president saying in the Oval Office, upon reaching the decision, “Let’s do the right thing, whatever it is.” Said Friedman: “I don’t think he cared less one way or the other about the politics.”

In an excerpt of the Hadashot interview aired earlier Wednesday, Friedman said he was “more mortified… than any Palestinian” by pictures of him standing alongside a doctored image of Jerusalem that showed the Dome of the Rock replaced by a Jewish Temple. 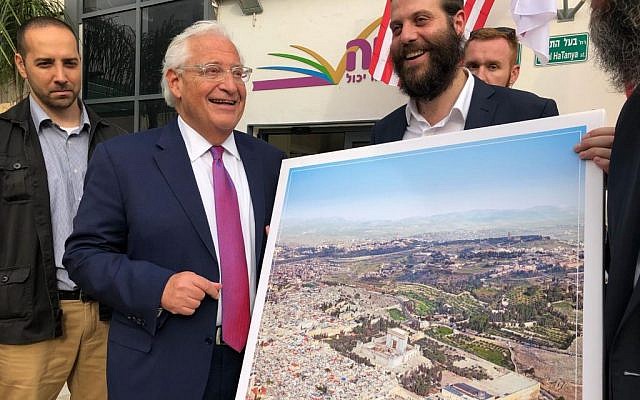 US Ambassador to Israel David Friedman is pictured next to a man holding a poster of the Jewish Temple replacing the Muslim Dome on the Rock on Jerusalem’s Temple Mount, at an event for the Achiya educational nonprofit in Bnei Brak, May 22, 2018. (Courtesy: Kikar HaShabbat)

Friedman claimed he was duped into being pictured with the poster during a visit Tuesday to the offices of an ultra-Orthodox group in Bnei Brak.

“Someone just shoved it in my face and took a picture. Of course that’s unacceptable to me, and the United States respects the status quo on the Haram al-Sharif,” he said, using a Muslim name for the Temple Mount. “That’s really an unfortunate thing, and I felt terrible that people might have reacted to that the way they did.”

To Channel 10, Friedman said the incident “took a second” and that he had spent the subsequent 24 hours “trying to clarify” what had happened. “I’ll have to be more careful next time somebody rushes at me with a picture,” he said.

Asked on Channel 10 about Trump’s strategy regarding Iran, now that the US has pulled out of the 2015 nuclear deal, Friedman would not be drawn on whether the US was seeking regime change, but stressed that America “sides with the Iranian people.” Trump’s goal, he said, was to “end all of the rogue behavior” of the regime.