Swift Injustice: The Case of Tommy Robinson by Bruce Bawer

The swiftness with which injustice was meted out to Tommy Robinson is stunning. No, more than that: it is terrifying.

Without having access to his own lawyer, Robinson was summarily tried and sentenced to 13 months behind bars. He was then transported to Hull Prison.

Meanwhile, the judge who sentenced Robinson also ordered British media not to report on his case. Newspapers that had already posted reports of his arrest quickly took them down. All this happened on the same day.

In Britain, rapists enjoy the right to a full and fair trial, the right to the legal representation of their choice, the right to have sufficient time to prepare their cases, and the right to go home on bail between sessions of their trial. No such rights were offered, however, to Tommy Robinson.

The very first time I set foot in London, back in my early twenties, I kicked up into an adrenaline high that lasted for the entire week of my visit. Never, in later years, did any other place ever have such an impact on me — not Paris, not Rome. Yes, Rome was a cradle of Western civilization, and Paris a hub of Western culture — but Britain was the place where the values of the Anglosphere, above all a dedication to freedom, had fully taken form. Without Britain, there would have been no U.S. Declaration of Independence, Constitution, or Bill of Rights.

Written questions by Geert Wilders, Marie-Fleur Agema and Raymond de Roon, Members of the House of Representatives of the Netherlands belonging to the Party for Freedom (PVV), submitted to the Dutch Minister of Foreign Affairs about the arrest of British activist and Islam critic Tommy Robinson:

1) Have you heard about the arrest of British activist and Islam critic Tommy Robinson for “breaching the peace,” while he was covering a trial of Islamic rapists, and that he was within a few hours convicted to 13 months imprisonment? What do you think of this madness?

2) Do you realize that, if the said Islam critic has to spend his jail sentence among Islamic criminals, this may cost him his life? What is your opinion of this?

3) Does, according to you, freedom of speech also apply to Islam critics in the EU and are you willing to immediately voice your dissatisfaction about this violation of freedom of speech by the United Kingdom to your British colleague and demand his attention for the personal safety of the person involved? If not, why not?

In the European Appeasement Olympics, Who Wins? by Bruce Bawer

The difference [between what Tommy Robinson did and any reporter] is that the BBC and other mainstream media are determined to give as little coverage as possible to the mass Muslim rape of infidel girls. 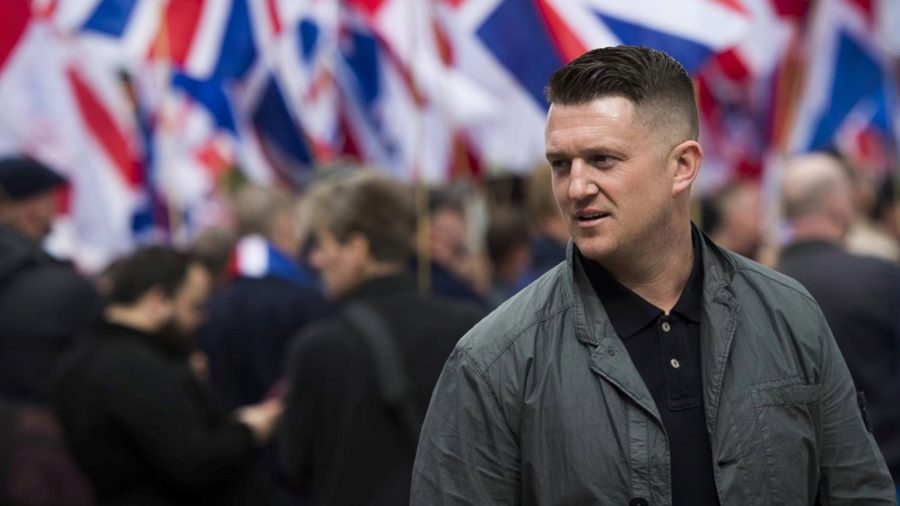 Tommy Robinson. His concern about Islam has made him a target of British authorities. Photo: Tommyrobinson.online.

These same cops arrested Tommy Robinson on Friday not because he did anything wrong, but because he was drawing attention to Muslim crimes that they would rather see ignored – and drawing attention, too, by extension, to their own genuinely criminal failure to defend innocent children from what was essentially jihadist torture.

Within hours, according to some sources, Robinson was tried and sentenced to thirteen months in prison. Even in Islam-appeasing Britain, this seems inconceivable. It sounds like Soviet or Nazi “justice,” not like British jurisprudence.

However Tommy Robinson may have strayed from the straight and narrow over the years, he is a champion of those victimized children, a voice for freedom, and a living rebuke to the cowardice of the British media, police, social workers, and other officials and public figures who knew what was going on in flats in Rotherham, Newcastle, and elsewhere, but stayed silent.

All right, the competition is over. Britain wins.