At least 28 mortar shells were fired at southern Israel in at least three separate barrages Tuesday morning as sirens blared throughout the area, the army said, amid heightened tensions along the Gaza border.

One person was lightly injured by shrapnel in his shoulder and was being treated at the Soroka medical center in Beersheba. There were no reports of significant material damage. One shell hit a tree in the yard of a kindergarten shortly before children were due to arrive.

The shellings appeared to be the largest attack from the Gaza Strip since the 2014 war, known in Israel as Operation Protective Edge.

The head of the Eshkol region told Channel 10 news that the army told him the attack was carried out by the Palestinian Islamic Jihad terror group, as revenge for the Israel Defense Forces killing three of its members in a cross-border exchange earlier in the week.

The Iran-backed Islamic Jihad did not immediately take responsibility for the mortar attacks, but its spokesperson praised them, saying “the blood of our people is not so cheap that the terrorists (Israel) can do what they want without deterrence.” 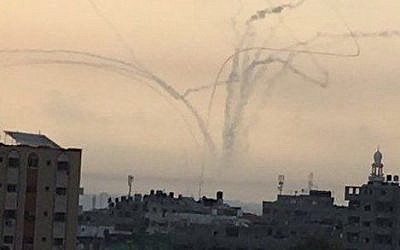 Mortar shells fired from Gaza at southern Israel, May 29, 2018 (Twitter)

There were no immediate reports of a significant Israeli military retaliation to the attacks. Massive reprisal raids were expected, following the repeated, highly irregular mortar shellings on Tuesday morning.

Following the Gaza mortar attacks, Defense Minister Avigdor Liberman called for a “special situational assessment” from IDF Chief of Staff Gadi Eisenkot and other senior figures from Israel’s security services. They were due to meet in the army’s Tel Aviv headquarters, known as the Kirya, Liberman’s office said.

Palestinian media reported that Hamas and other terrorist groups were abandoning their positions in the Gaza Strip ahead of an expected forceful response by the IDF.

The initial, primary bombardment came at 7 a.m., when approximately 25 mortar shells were toward the Sha’ar Hanegev and Eshkol regions, as parents were beginning to send their children to school, the IDF said.

The army said its Iron Dome missile defense system intercepted the majority of the incoming shells from the first barrage.

One of the shells struck a tree in the yard of a kindergarten in the Eshkol region, less than an hour before students were due to arrive, a spokesperson for the community said.

Exactly one hour later, incoming sirens were triggered for a second time in the Eshkol region, but not in Sha’ar Hanegev, as at least two mortar shells struck an open field in the area, the army said. 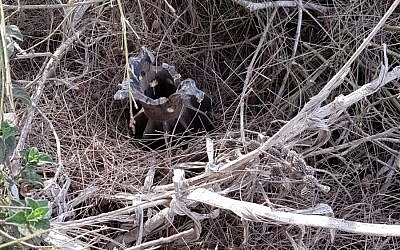 The remains of a mortar shell that was fired from the Gaza Strip at an Israeli community near the Gaza border, on May 29, 2018. (Israel Police)

The second attack caused neither injuries nor damage.

Sirens in southern Israel were triggered by a mortar shell for a third time shortly after 9:30 a.m., the army said.

That projectile struck an open field outside a community in the Eshkol region, causing no injury or damage, local officials said.

The military and police refrained from specifying where exactly the mortar shells struck in southern Israel, as the information could be used by terrorist groups in the Gaza Strip to better aim their fire.

The kindergarten that was hit by a mortar shell — along with all other schools in the area — opened as usual on Tuesday, despite the attack.

The commander of the IDF’s Southern (Gaza) Brigade, Col. Kobi Heller, visited the kindergarten and others in the region following the attack. 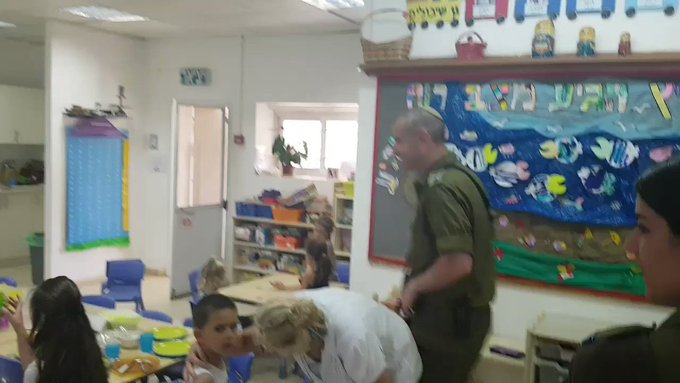 “At this point, there are no special instructions for residents of the Gaza periphery. Please continue to listen to the instructions of the Home Front Command,” the army said in a statement.

Pictures and videos were quickly shared on social media apparently showing the launches of the mortar shells and the interceptions by the Iron Dome.

The Iron Dome’s interceptions of the majority of the incoming mortar shells marked a significant improvement for the missile defense system. It was initially designed to shoot down rockets and struggled to counter mortar shells, which are both physically smaller and tend to remain in the air for less time, giving a short window for interception, though this no longer appears to be an issue.

Following the initial attack, Palestinian media reported that an Israeli tank fired on at least one position belonging to a terrorist group in the Gaza Strip, but this could not be confirmed.

Tuesday’s mortar shell attack appeared to be the largest bombardment, in terms of the number of projectiles fired, in nearly four years.

The next largest attack was also carried out by the Iran-backed Islamic Jihad, which calls for Israel’s destruction. On November 30, the group fired a dozen mortar shells at an IDF position northeast of the Gaza Strip, causing light damage but no injuries.

On Sunday, an IDF tank attacked an Islamic Jihad position near the Gaza border after a group of Palestinians planted an improvised explosive device, disguised as a set of bolt cutters, on the security fence. At least three members of the terror group were killed, and the Islamic Jihad vowed revenge.

“We will not give up our duty to the blood of the martyrs shed by the occupation, and we know how to respond to this dangerous escalation,” the group said in a statement. 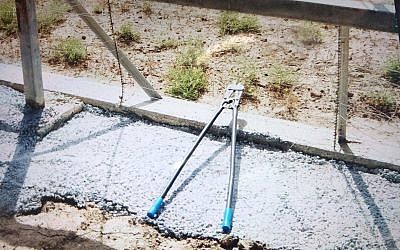 An improvised explosive device, disguised to look like a set of bolt cutters, found at the Gaza security fence on May 27, 2018. (Israel Defense Forces)

Tuesday’s mortar attack also came less than 12 hours after Palestinians in the Gaza Strip opened fire with a machine gun at the southern Israeli town of Sderot, causing damage but no injuries, in the second such attack in as many weeks, the army said.

The heavy gunfire triggered incoming rocket sirens in Sderot and the surrounding Sha’ar Hanegev region, according to the army.

The gunfire damaged a number of buildings in Sderot, the city said, as well as at least one car, according to Israel’s Hadashot news.

It was the second machine gun attack on Sderot in under two weeks. On May 16, bullets struck a number of homes in the town, though in that case no rocket siren was triggered.

The region has seen a marked uptick in fighting in recent days, with near-daily cross-border incidents shattering the tense calm that had existed in the area previously.

Unlike previous rounds of violence, until Tuesday Gazan terrorists generally refrained from shooting rockets, instead using small arms fire directed at troops, planting bombs, flying incendiary kites, and sneaking across the border to cause minor damage.

Hours before Monday’s machine gun attack, Israeli soldiers came under fire from Gaza, prompting the military to launch fresh strikes on Hamas targets in the Strip, the IDF said. One Gazan was killed and another moderately injured, according to the Hamas-run Gaza health ministry.

The Israeli troops were arresting two Palestinians who infiltrated into Israel from the Gaza Strip when they came under fire from across the border, the army said. No Israeli soldiers were reported to be injured. 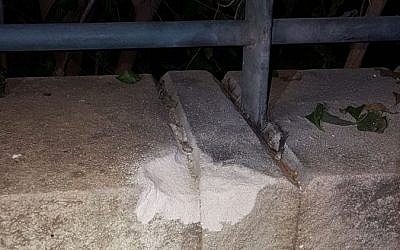 A bullet from Gaza that struck a wall in the southern Israeli town of Sderot on May 28, 2018. (Sderot Municipality)

As a matter of policy, the Israeli army considers Hamas, which rules Gaza, to be responsible for any attack emanating from the beleaguered coastal enclave.

There were also numerous attempts over the weekend to breach and damage the border fence, the IDF said, as well as several attempted attacks, including one using a drone.

Since March 30, tens of thousands of Palestinians have taken part in weekly protests which Israel says are orchestrated by Hamas and used as cover for attempted terror attacks and breaches of the border fence.

The violent demonstrations were meant to end on May 15, but Hamas leaders have said they want them to continue. Over 10,000 Gazans took part in the demonstrations in the course of Friday and Saturday, the army said.

The demonstrations came to a head on May 14 when the US moved its embassy to Jerusalem and at least 60 Palestinians were killed in clashes — almost all of them Hamas members, the terror group has acknowledged.

Michael Bachner and Times of Israel staff contributed to this report.