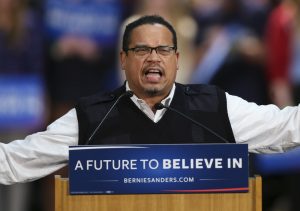 Every day Israel is subjected to a torrent of warnings from Democrats.

“You will pay a price for your support of President Donald Trump,” we are told.

“He won’t be president forever, and when he’s gone, watch out!”

The basic notion, repeated over and over again is clear enough. If Israel doesn’t want to be punished by the next Democratic White House – which we are warned will make us long for Barack Obama – then we’d better stop talking about the fact that Trump is the best ally and friend Israel has ever had in the White House.

These warnings are not baseless. The data are unmistakable. Republicans are more supportive of Israel than they ever have been. Democrats are abandoning Israel in droves. In January, Pew reported that liberal Democrats side with the Palestinians over Israel by a margin of nearly two to one. Conservative Republicans support Israel over the Palestinians by a margin of more than 16 to 1.

The yawning gap in support plays out in multiple ways. This week, 70 House Democrats sent a letter to Prime Minister Benjamin Netanyahu demanding that Israel not destroy illegal Palestinian construction in the south Hebron hills.

Last week, no serving Democratic lawmakers attended the opening of the US Embassy in Jerusalem.

How is Israel supposed to deal with this wide and growing gap in partisan support? Before taking a stab at the answer, we first must understand what is causing the Democrats to turn against the Jewish state.

There are two primary causes for the current trend.

The first has to do with President Trump.

Never in US history has a president been demonized and delegitimized by his political opponents as Trump has been by Democrats. Since the day he was elected, Democrats have sought to overturn the election results.

Trump’s decision to recognize Jerusalem and move the US Embassy to Israel’s capital is case in point. In 1995, Democrats and Republicans joined together to overwhelmingly pass the Jerusalem Embassy Act mandating the transfer of the US Embassy in Israel to Jerusalem. It passed the Senate 93-5.

Every year since lopsided majorities in both houses have voted in favor of resolutions enjoining successive administrations to follow the law and move the embassy. In the past four presidential elections, the Democrats’ party platform has recognized Jerusalem as Israel’s capital and supported moving the embassy to Jerusalem.

Given this background, the obvious move for Democrats would have been to applaud Trump for finally doing what none of his predecessors did.

Instead, with some notable if constrained exceptions, Trump’s move was met with stony silence by the vast majority of Democrats. And several powerful lawmakers, including House Minority Leader Nancy Pelosi, and prominent senators Dianne Feinstein, Dick Durbin, Chris Murphy and Bernie Sanders condemned the move.

The only possible explanation for their abrupt abandonment of a policy they had dutifully followed for 23 years is Trump. They revile him and reject him to such a degree that they prefer to abandon long-held positions than admit that he did exactly what they have wanted the president to do for the past 23 years.

The second cause of the Democrats’ abandonment of Israel is the rise of identity politics within the party.

For the past decade or so, a struggle for the soul of the Democratic Party has been going on between moderate Democrats, in the Bill Clinton mold and the far Left. The Clinton Democrats ascribe to traditional liberal democratic values and views of America and its role in world affairs. They believe that the protection of liberty and civil rights are the beating heart of American identity and that America has an indispensable and uniquely moral role to play as a superpower in world affairs.

Opposing them are lawmakers and activists from the far Left who believe identity politics should govern the party’s positions and policies. Identity politics reject the notion that people should be judged by their achievements and character.

Instead its subscribers assert that people should be judged, pushed ahead or kept back, supported or opposed based on their membership in various ethnic, racial, gender and sexual identity groups.

Perhaps the best encapsulation of identity politics was given this week by a New York Times editor on the paper’s twitter feed. In a post reporting the results of the gubernatorial primaries in Georgia, the editor wrote, “History in Georgia: Stacey Abrams became the first black woman to be a major party’s nominee for governor after winning her Democratic primary.”

This position is unmovable. Identity politics imposes a pecking order of victimhood that is impervious to reason and closed to argument.

People are judged only by their placement on the ladder of victimhood. During Obama’s presidency, the dispute between the two warring factions was swept under the rug as everyone joined together in supporting him.

But even as he was supported by moderate and radical Democrats alike, Obama advanced policies and positions that empowered the radicals at the expense of the moderates.

Obama’s hostility towards Israel, his repeated intimations that Israel is a colonialist outpost while the Palestinians are the indigenous people of the land of Israel were part and parcel of his across-the-board effort to enable the radical Left to take over the party. Obama’s efforts laid the groundwork for socialist Sen. Bernie Sanders’ surprisingly strong challenge to Democratic front-runner Hillary Clinton in the party’s presidential primaries. It also set the stage for the rise of radical leaders like Congressman Keith Ellison and Sen. Elizabeth Warren in the post-Obama Democratic party. Feinstein, who supported a bipartisan Senate resolution just last year calling for the implementation of the Jerusalem Embassy Act of 1995, is now facing a far-Left primary challenger.

To fend off the challenge, she is embracing identity politics.

Her outspoken condemnation of the embassy move no doubt is an expression of her political pivot to the far Left.

And so we return to the question: What can Israel do to minimize the partisan divide over support for the Jewish state in America? Democrats advise Israel to do two things. First, they say, the government, and the public more generally, should keep Trump at arm’s length. We should stop supporting him and applauding and thanking him for his support for Israel.

Second, they say, the government should maintain faith with Obama’s pro-Palestinian, anti-Israel policies. Among other things, this means that Israel should permanently deny Jews the right to exercise their property rights in Jerusalem, Judea and Samaria. Israel should also prop up Hamas and the PLO.

If Israel does these things, the Democrats say, then a future Democratic president will be more likely to develop a constructive relationship with Jerusalem than he or she otherwise would be.

There are two problems with this advice. First, it involves abandoning the proverbial bird in the hand for a bird that not only flew out of the tree but is swiftly vanishing over the horizon. If present trends in the Democratic party continue, there is little chance that a future Democratic president will be supportive of Israel. The party’s rank and file would revolt.

The second problem with the advice that Democrats are providing is that if Israel listens to them, it will be at even greater risk of being harmed by a hostile administration in the future. Given the ascendancy of the radical Left in the party, and its intractable, impermeable hatred of Israel, Israel needs to secure as many of its long-term strategic interests as it can with the friendly Trump administration lest those interests are imperiled by a hostile Democratic White House in the future.

Among other things, this means securing Israel’s long-term strategic interests in Judea and Samaria by applying Israeli law to Area C.

It means diminishing Israel’s strategic dependence on the US by vastly diminishing with the short term goal of eliminating US military assistance to Israel. That aid should be replaced with US-Israeli joint projects to jointly develop weapons systems and advance other common strategic goals.

And it means destabilizing with the goal of overthrowing the Iranian regime.

The Democrats who are saying that by supporting Trump, Israel is turning itself into a partisan issue, are themselves responsible for turning support for the Jewish state into a partisan issue. By denying that Israel has a right and a legitimate interest in standing with a president that is supportive of and takes concerted steps to advance the US-Israel alliance, they are saying Israel has no right to be supported by its supporters.

The Democrats are right that Israel has a vested interest in preserving and expanding bipartisan support. But contrary to their position, there is only one way for Israel to achieve this goal, and happily, the government’s policies indicate that this is the path that Israel is following today.

Democrats are right that Trump won’t be president forever. Israel needs to heed their warnings not by distancing itself from the administration, but by working with the Trump administration to secure its long-term strategic interests and goals.

Democratic and Republican supporters of Israel will certainly support our efforts.