An umbrella group for American organizations that are part of the Boycott, Divestment and Sanctions (BDS) movement funnels donations to a Palestinian organization with ties to terror groups, Tablet Magazine reported Friday.

According to Tablet, the US Campaign for Palestinian Rights, which oversees the work of 329 different BDS organizations, fiscally sponsors the Palestinian BDS National Committee (BNC), a West Bank- and Gaza-based group that is the main coordinator of BDS efforts in the Palestinian territories.

The Campaign funnels tax-exempt US donations to the BNC. The BNC, meanwhile, counts as one of its members the Council of National and Islamic Forces in Palestine, a coalition of “resistance” movements that includes Hamas, Palestinian Islamic Jihad and the Popular Front for the Liberation of Palestine — all considered terror groups by Israel, the US and Europe.

Tablet stressed in its report that “there is no indication that any of the money raised through the fiscal sponsorship is going to terror groups,” but that a financial relationship of some sort was clear — one that may be illegal under US law. 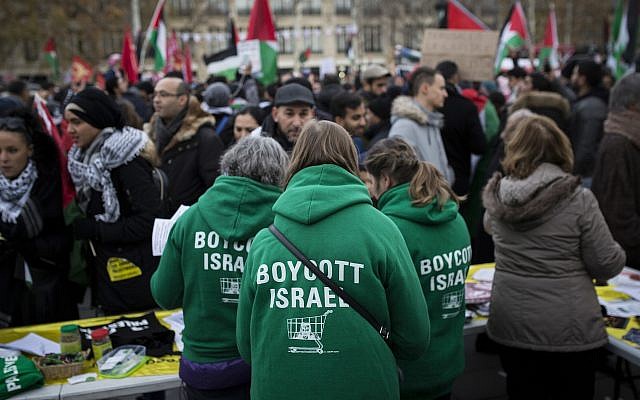 The Simon Wiesenthal Center, which combats anti-Semitism and hate, said Tablet’s reporters “have confirmed an official link between the American BDS campaign and some of the most evil, violent organizations on the planet.”

It asserted that “Any person of faith who endorses the anti-Semitic BDS movement should now realize that they are also supporting the goals of its sponsors, among them people with the blood of more than 1,000 Israelis and tourists on their hands. The hypocrisy of BDS has always been obvious, but now it’s official.”

Israel has intensified its fight against the global movement calling for boycotts, divestment and sanctions. The movement has urged businesses, artists and universities to sever ties with Israel and it includes thousands of volunteers around the world.

Supporters of the movement say the tactics are a nonviolent way to promote the Palestinian cause. Israel says the campaign often masks a more far-reaching aim to delegitimize or destroy the Jewish state. 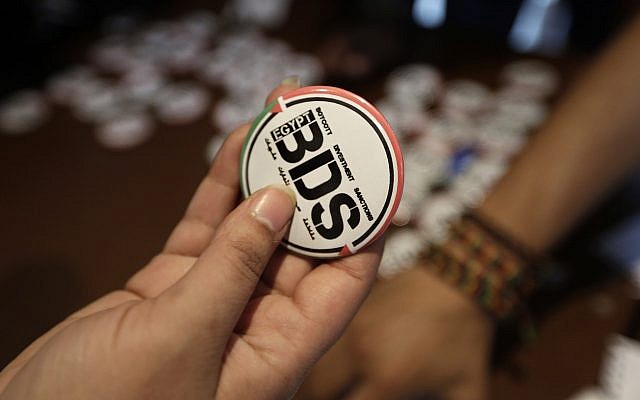 An Egyptian buys a pin with the Boycott, Divestment and Sanctions (BDS) logo in Cairo, Egypt, in 2015 (AP Photo/Amr Nabil)

In May, Jerusalem called on the European Union to halt funding to more than a dozen European and Palestinian non-governmental organizations that it says promote boycotts against Israel, saying the financial support violates the EU’s stated policy that it opposes boycotts against the Jewish state.

Israel’s Strategic Affairs Ministry published a report with a list of groups that it said receive EU funding and call for boycotts against Israel. It said some of the groups had links to terror groups while receiving EU money.

Earlier this year, Israel identified 20 activist groups from around the world whose members would be banned from entering the country over their calls to boycott the Jewish state. 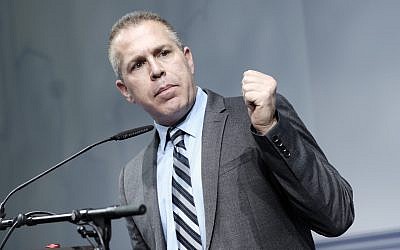 In the US legislative efforts have been made both on the federal level and in individual states to combat boycott calls.

In the years since its formation, the BDS movement has seen limited success among progressive audiences, persuading several church organizations to divest themselves of Israel-related investments and garnering support on US college campuses. Recently, pop singer Lorde joined a number of other artists who have canceled performances in Israel amid pressure from BDS activists.

Even so, a slew of other musicians have defied boycott calls and performed. Israel has also enjoyed new economic partnerships and diplomatic ties despite calls for boycotts, and it has become a top destination for international sporting and cultural events. Last month, Israel became the first non-European country to host stages of the Giro d’Italia cycling event.