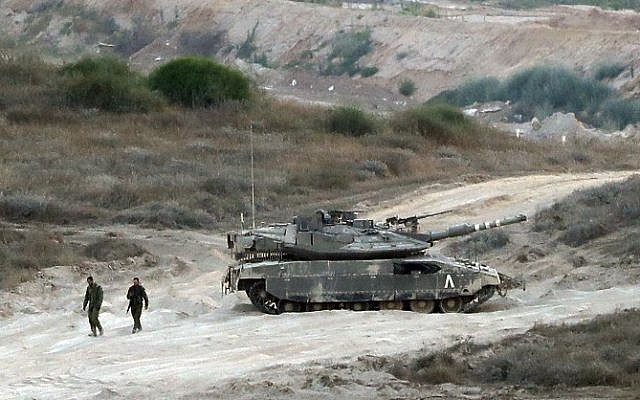 Israeli security forces continued preparations Friday morning for an expected day of violent protests on Gaza’s border with Israel, as an incendiary kite started a blaze in a field near Kibbutz Mefalsim.

The army is preparing for large-scale confrontations throughout the day, with military reinforcements stationed in multiple positions along the Gaza border fence.

Fire-fighting units are also on high alert, alongside teams of volunteer spotters scanning the sky to identify incoming incendiary kites. A senior officer said Thursday that soldiers and volunteers have downed over 500 fire kites using drone technology, with hundreds expected to be launched Friday amid a massive planned protest by Palestinians at the border.

Before noon on Friday, amid a tense wait for the start of the protests, one brushfire near Mefalsim was already blamed by authorities on a kite from Gaza. Israel Defense Forces troops shot at several Palestinians attempting to breach the fence in the southern part of the territory; no one was reported hurt in the incident, with the Palestinians abandoning the attempt.

Also Friday morning, Israeli aircraft reportedly identified large piles of tires near Rafah, in southern Gaza, that were being readied for use in the protests, as tires produce effective smokescreens when set ablaze. According to Arabic-language media, the Israeli Air Force ignited the tire piles to prevent their use later in the day.

On Thursday evening, Hamas announced that it hopes over 40,000 people will come to Gaza’s border with Israel for the demonstration on the last Friday of Ramadan as part of the annual protests to mark al-Quds Day, so called for the Arabic name for Jerusalem. The day is marked by demonstrations throughout the Muslim world and in some European cities.

Hamas leader Ismail Haniyeh said that protests at the Gaza border will continue until Jerusalem is “free,” Channel 10 news reports.

Haniyeh also said that Hamas was willing to consider “a genuine initiative that would completely end the siege on Gaza, but not at the expense of the integrity of the Palestinian issue.” 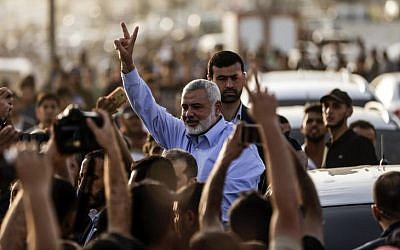 Hamas head Ismail Haniyeh at a protest camp during clashes with Israeli forces along the border with the Gaza Strip east of Gaza City on May 18, 2018. (AFP/Mahmud Hams)

In an English-language column published Thursday on the UK-based Middle East Eye website, whose coverage on Israel is overwhelmingly critical, Haniyeh said the protesters will “bring down the walls” of Gaza’s “huge prison.”

Haniyeh added that if Palestinians can’t gain their “right to freedom, independence and honorable living” by peaceful means, “it is our right to resist occupation through all possible means, including armed resistance.”

In two months of mass protests at the Gaza border, over 110 Palestinians were killed and thousands wounded by Israeli military fire. Most of the fatalities were members of terror groups, Hamas and Islamic Jihad have acknowledged. Israel said its troops were defending its border and accused Hamas of trying to carry out attacks under the cover of the protests.

The protests at Israel’s border so far peaked on May 14, when some 40,000 Gazans protested along the fence and violent clashes took place between troops and Palestinians. The protest came as the US opened its embassy in Jerusalem.

Following the demonstrations, organizers said Naksa Day — which commemorates the Arab loss in the 1967 Six Day War and is marked on June 5 — would be the next large protest. In addition, tens of projectileshave been fired from Gaza into Israel in recent weeks, with Israel often responding with strikes on Hamas targets. 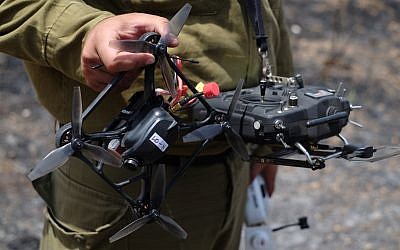 An IDF operator holds up his drone and remote control on June 7, 2018, in a field burned by ‘fire kites’ from the Gaza Strip. (Judah Ari Gross/Times of Israel)

However, Hamas has since attempted to garner support for larger protests on Friday instead, for a demonstration dubbed the “March of a Million to Jerusalem.” The protest has been touted as a fresh attempt to breach the border fence en masse, drawing fears of a melee similar to that seen on May 14, when Palestinians burned tires, threw firebombs, tried to cut through the fence and shot at troops.

Firefighters were working Friday morning to control a fire near Kibbutz Mefalsim, close to Israel’s border with Gaza.

Since the “March of Return” protests began along the Gaza border at the end of March, hundreds of kites and helium balloons have been flown into Israel outfitted with Molotov cocktails and containers of burning fuel, setting fire to large swaths of land.

Some 17,500 dunams (4,300 acres, or nearly seven square miles) of land on the Israeli side of the Gaza border have been burned in more than 250 fires over the past two months, more than half of them in nature reserves, according to Israeli assessments. 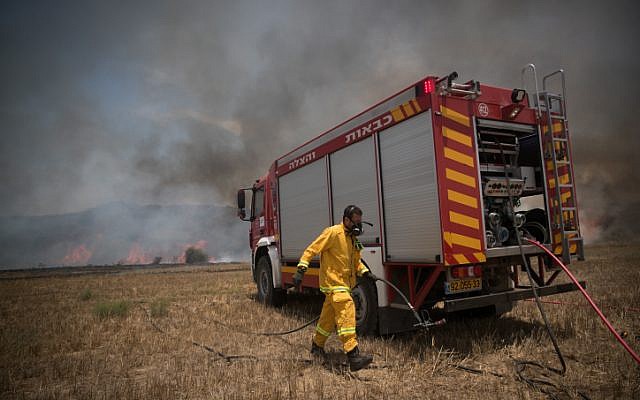 An Israeli firefighter seen extinguishing a fire in a field in southern Israel, caused by kites flown by Palestinians from the Gaza Strip on June 5, 2018. (Yonatan Sindel/Flash90)

The fires, specifically those in the nature reserves, have also wreaked havoc on local wildlife, according to ecologists.

According to the Israel Nature and Parks Authority, approximately 10,000 dunams in parks and reserves in southern Israel were burned, although a spokesperson for the authority said investigations were still underway to determine exactly how much of that was caused by incendiary kites and balloons, and how much was from other sources.

Anti-Israel rallies to mark al-Quds Day began in the Iranian capital of Tehran on Friday morning, condemning Israel and expressing support for the Palestinians. The rallies, including one at Tehran University, were expected to last through Friday prayer ceremonies. Iran has marked al-Quds Day since the start of its 1979 Islamic revolution.

Iran does not recognize Israel and supports anti-Israeli terror groups such as Hamas, which rules Gaza and openly calls for Israel’s destruction; Lebanon’s Hezbollah, as well as militia forces that have carried out attacks against Israel from southern Syria.

Demonstrators in Tehran also chanted anti-American slogans to condemn the US decision to move its embassy to Jerusalem.