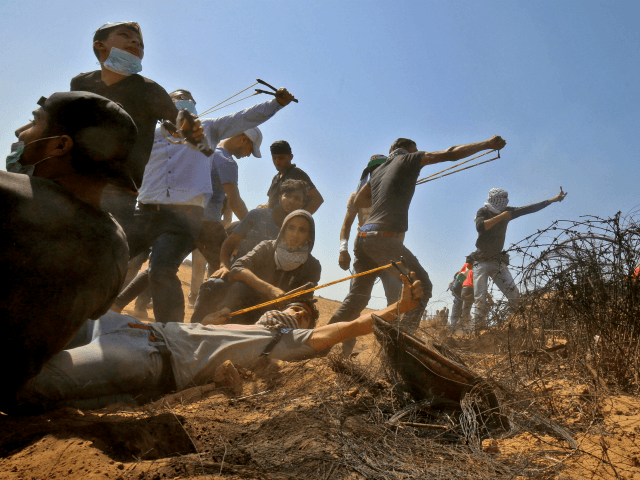 The rioters burned tires to obscure the views of the Israeli military, and also hurled rockets, grenades and pipe bombs at the Israel Defense Forces (IDF).  One burning terror kite carrying an explosive device detonated in the air, the IDF said.

IDF troops are reinforced along the Gaza Strip security fence in order to protect security infrastructure and defend Israeli civilians in the communities surrounding the Gaza Strip from the attempted terror attacks led by the Hamas terror organization pic.twitter.com/NQhOke62cp

Hamas leader in Gaza Ismail Haniyeh made clear Thursday that the point of today’s riot campaign is to “bring down the walls” protecting Israel from the Gaza Strip.

As the IDF noted in a tweet, Hamas leader Yahwa Sinwar recently declared of the Gaza riots: “We will tear down the fence, and tear out the hearts from their bodies!”

The Hamas-run Gaza health ministry claims that 386 Palestinians have been injured so far, five seriously.   The casualty numbers, which are expected to rise as today’s riots continue, could not be immediately verified. Hamas has a history of exaggerating casualty claims.

The IDF says it is “responding with riot dispersal means and are operating in accordance with the rules of engagement.”

While the protests are ongoing on Friday, the numbers that showed up so far must be a disappointment for Hamas, which has been aiming to get 100,000 or more at one time to attend its moths-long border riots campaign.

This reporter previously analyzed the motivations for the Hamas border mayhem:

Why the riots now?

First there is Iran. Earlier on Monday, Israel’s Shin Bet security service revealed it possesses information that Iran is funding some of Hamas’ riots. The Iranians have an interest in riding the wave of Gaza violence to deflect the IDF’s attention from Syria, where Israel has carried out numerous bombing raids that have reportedly devastated Iranian military positions and Iran-run bases in that country. Iran is also seeking revenge for those Israeli strikes and for Trump’s decision to withdraw from the international nuclear accord.

Then there are prominent internal Hamas considerations. The Islamist terrorist group understands the Gaza population is frustrated that 11 years of Hamas rule has resulted in destructive wars – launched each time by Hamas itself – and an economy dangerously teetering on the brink of collapse. Hamas’s decision to turn Gaza into a terrorist enclave has prompted an Israel-Egypt boycott that has impacted all aspects of Gaza life, although Israel allows for truckloads of humanitarian goods and supplies per day to enter Gaza.

Gazans are also suffering from the Hamas-Fatah divide, with the rulers of the West Bank and Gaza Strip failing to reach a reconciliation agreement that would likely result in a flow of aid to Gaza.

Hamas correctly estimated that the ensuing casualty count will bring international news media attention to the humanitarian crisis in Gaza and thrust the issue to the center of the foreign policy debate.  The terrorist group couldn’t ask for a better publicity gift than major international news networks – reportedly including CNN, Sky News and the BBC – featuring today’s Hamas riots on a split screen with the opening ceremony for the new U.S. embassy.

The border clashes may also press Egypt into easing the blockade and putting Egyptian pressure on Palestinian Authority President Mahmoud Abbas’s Fatah party to reach a reconciliation deal, since Gaza tensions usually favor the jihadists operating against Egypt in the Sinai. Abbas must fear that the protests could spread to the West Bank and threaten his rule there.

And finally, Hamas has been cash-strapped lately after many of its state patrons reportedly pulled some of their financing. The Gaza riot campaign, with help from the international news media, puts Hamas back at the forefront and signals that it is useful to financially support the terrorist movement once again. This as Hamas leads the people of Gaza down the path of destruction.