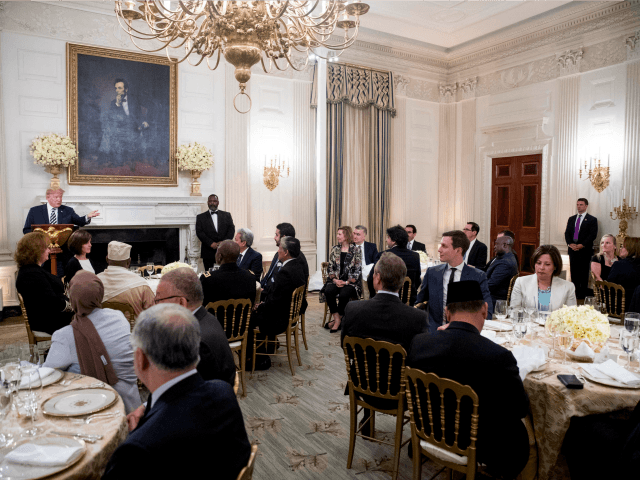 The exclusion is a sharp change from former President Barack Obama, who put the Brotherhood-linked groups front-and-center in his Iftar dinners and his Middle East strategy. His regional strategy crashed once the Brotherhood groups in Egypt, Syria, Libya, Tunisia, and other countries were unable to restrain their Islamic radicalism during the so-called “Arab Spring.”

Reports show that most of the invitees at the dinner were the ambassadors of Islamic countries, including Saudi Arabia, Egypt, and Morocco. The dinner marks the end of the Islamic Ramadan season of fasting.

CAIR has been declared a terrorist organization by the United Arab Emirates and was named by federal prosecutors as an unindicted co-conspirator in a Hamas-funding operation. MPAC was “established in 1988 by followers of the Muslim Brotherhood and admirers of Hezbollah… [and]  is yet another Islamist wolf in the ‘social justice’ clothing of the hard Left,” said Andrew McCarthy, a prosecutor who convicted several Muslims for the New York jihad attacks.

Exclusion is a financial hit for various groups, some of which rely on domestic — or even foreign — donors who support them because of the groups’ claimed ability to advance Islamic goals in U.S. politics.

The White House did not say if it invited representatives of Islam reform groups which who reject Islam’s demand that government should follow Islamic dictates. For example, Trump did not publicly announce an invite to the American Islamic Forum for Democracy, which is led by Zuhdi Jasser.

Also, Trump has not announced any replacement for Obama’s anti-terrorism policy, which gave these Muslim groups taxpayer funding and political legitimacy in exchange for their promise to quietly suppress political violence by Muslims. Trump’s deputies have abandoned that policy but have not announced a replacement policy.

While the White House did not publish an official invite list before the dinner, the excluded groups protested in remarks to the media.

“I wouldn’t anticipate that any credible mainstream American Muslim organizations or leaders would be invited or agree to attend, given the administration’s Islamophobic and white supremacist positions and policies,” Ibrahim Hooper, the CAIR spokesman, told the Guardian newspaper.

The “Islamophobic” claim suggests that opponents of CAIR’s political agenda have a mental disease, akin to a phobia.

“There has been no real engagement, no real effort to even invite members of our faith communities, to have conversations with the White House or administration,” said Hoda Hawa, MPAC policy director, told the Guardian newspaper.

The MPAC group maintains a strong anti-Israel policy and has close ties to Islamic radicals in Libya and Egypt. In June 2012, for example, MPAC applauded the Brotherhood-backed President of Egypt, Mohamed Morsi:

Less than one week ago, Dr. Mohamed Morsi became the first democratically elected president in Egypt’s thousands of years of history … Indeed, the transition to a sustainable democracy does not come after one election — it will be a continuous effort and will need the support and hard work of the Egyptian people and the international community.

Morsi and other Egyptian Islamic radicals won an initial election in 2012 but were removed by the military in a 2013 coup, despite quiet support from Obama. MPAC opposed the coup.

MPAC also complained that Trump has left them with little or no influence in the White House. “With the Trump administration, we have seen no effort by them, by the president himself, his senior officials, who are noted anti-Muslim extremists, Cabinet officials, towards engaging in a productive dialogue with the American Muslim community,” Omar Noureldin, MPAC’s vice president, told an NPR interviewer. Trump, not Islamic political activists, must change, he said:

I believe it’s incumbent on the president and his Cabinet and senior White House officials to extend those olive branches genuinely. And until they do so, we don’t believe that there’s going to be a meaningful dialogue or ability to move the needle on the issues that affect our communities.

Linda Sarsour, a jihad advocate who was welcome in Obama’s White House, also was excluded from the dinner.

Before any Muslims accept invites to break bread with the White House during Ramadan. https://t.co/0hUxW1CuSr

Obama’s support for the Brotherhood-linked groups proved futile because they were unable to moderate their peers’ Islamic revolutionary zeal in Egypt, Libya, or Syria.

In September 2012, for example, four Americans were killed by Islamic gunmen in Benghazi while other Islamic radicals surrounded the U.S. embassy in Cairo. In Syria, the Brotherhood-linked Islamic groups were unable to build any political alliances with any moderate or non-Muslim communities, ensuring a bloody civil war that continues in 2018.