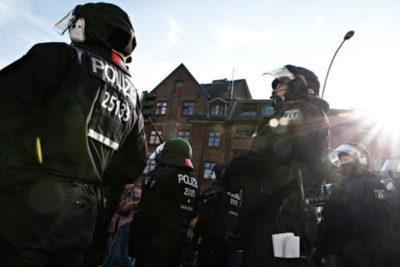 This is more of the poison fruit of Merkel’s suicidal immigration policies. She has inundated Germany with migrants without any idea of how difficult, and indeed, well-nigh impossible, to assimilate them. Migrants who have nothing but contempt for the culture and authorities of their new land are not going to assimilate. The future is only going more incidents like this one. The only way Germany can survive as a free nation now is by a drastic reversal of its immigration policies, but that is not on the horizon. Merkel has several more years left in which she can complete her work of destroying Germany and doing serious damage to Europe in general.

“Ricin recovered from apartment in Cologne, Germany,” Associated Press, June 14, 2018 (thanks to Lukasz):

BERLIN — A homemade batch of the deadly toxin ricin was found in a Tunisian national’s apartment in Germany, prosecutors said Thursday.

A written statement said a 29-year-old — identified only as Sief Allah H. — was arrested on Tuesday night on suspicion on violating the country’s War Weapons Control Act.

He is accused of having started procuring material, including a large quantity of seeds needed for the creation of ricin, online in mid-May.

The suspect succeeded in creating the toxin this month and investigators found it during a search of his Cologne apartment, the statement said.

The authorities are still investigating exactly how the suspect planned to use the ricin, but stated he was working on a “biological weapon” and there was “initial suspicion” that he could have been preparing a terrorist attack.

Prosecutors said they currently have no evidence of a connection with any extremist organization….