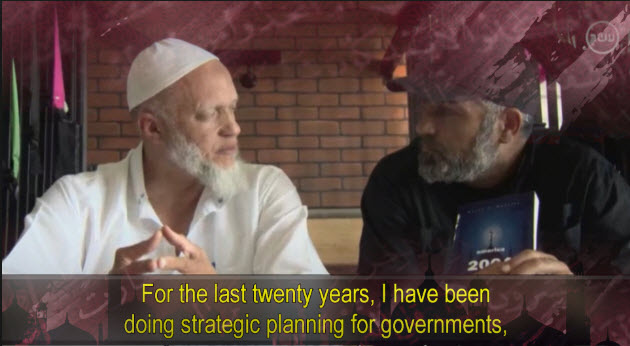 Since the August 2004 discovery of the Muslim Brotherhood’s 1991 Explanatory Memorandum and The Investigative Project‘s 2012 film, Grand Deception, these documentaries have further revealed the extent of societal penetration sought or achieved by a large and growing, but secret, Islamic soft jihad army that seeks to subvert the U.S. and enfold it within a global Islamic empire.

“Da’wa is the Number 1 Weapon!” asserts an American Muslim in Belle Glade, Florida – a convert renamed Abu Bakar, and author of the book, 2064 – Islamic America. Formerly a successful U.S. corporate strategic consultant, he now levers his profession to propagate Islam.

“Why wouldn’t I take the knowledge and experience that Allah has blessed me with to advance Islam in America,” asks Abu Bakar, rhetorically. He labors together with Belle Glade Muslim Yusuf al-Muslet to transform that locale into a model Islamic town for the rest of America to follow.

In this new documentary, al-Muslet expounds on the Jihad stages that also coincide with the classic Ikhwan (Muslim Brotherhood) scheme. “The first Jihad is an internal [political] Jihad, and then comes Jihad of war (sword).”

Abu Bakar and al-Muslet shared their objective with Yehezkeli – whom they believe to share their goals. “Our mission is to inculcate Islamic values in the heart of every American. It’s all in this book – 2064. This is our vision for the next 50 years –America – a place united under its banner; “There is no god but Allah.”

Short-term, they plan to buy a closed Belle Glade public school and make it the town’s “first Islamic school” for children – aged only six weeks through high school. They trust that when “parents will bring their kids to Islamic schools, their kids will convert, and the entire family will convert as well,” and thus guarantee the fulfillment of their plan in Belle Dale and the ability to “scale it up to the rest of the country.” They argue, “there is nothing more beautiful than Sharia.”

As regards the nation, Abu Bakar plans first to run for Belle Glade town commissioner, because the Ikhwan “need more Muslims; commissioners, senators, congressmen, whatever political position; in cities, in big and small administrations.” Clearly, they observe, the plan is well on its way. “In Dearborn they already have control.”

Just consider the numbers. This year, over 90 (mostly Democrats) U.S Muslims are running for public office.

Zvi then notes that all Muslim Brotherhood insurgences to date started precisely this way, as seemingly inconsequential individuals perused their course with tremendous Eastern-style patience.

Skeptics argue that Islam won’t threaten the U.S., Zvi explains. Muslims participate in the American dream, and are free to build mosques and engage in Da’wa and spread Islam. But they do not understand: as Muslims like Abu Bakar and Muslet spread their Sharia ideology specifically to transform America, widespread developments within the Muslim community will inevitably, and relatively soon, present the kind of great challenge they cannot now imagine, much less foresee.

Says Zvi, while generally a very few people recognize soft Jihad for what it is; it continues to progress in almost every location, both in America and abroad. The engines of political Islam operate worldwide at full speed, especially outside the Middle East. In each nation, this ideological threat advances apace, based on appeals craftily adjusted to local needs and tastes.

Molded in the 1970s in Egypt, the Da’wa system focuses first on the disadvantaged, and represents Islam as a solution for all problems.

This program has since been severely damaged in the Middle East admits Hasan Shibly – head of the Florida chapter of the Council on American Islamic Relations, (CAIR) and an expert in ‘double talk.’ “The freedom we enjoy in the U.S. to practice our religion, is much greater than the freedoms granted in most Muslim countries…,” says Shibly. “Islam will be victorious and spread in this country. It’s for the benefit of this country…”

Zvi laments that without concerted free world effort to apply the brakes, the system’s growth and global reach will shortly enter a place of no return. First, however, the West must realize that soft Jihad is far more dangerous even than open Jihad warfare.

Yehezkeli in his documentaries warns the U.S., you cannot successfully fight terror unless you also understand its fundamental ideological base. Sharia has no place at all for freedom of speech. Its values and those of the dream for the Caliphate do not allow it.

In modern Turkey, Islamization evolved quietly until the Muslim Brotherhood’s final triumph. Recep Erdogan and his regime now control everything, as secularism disappeared. (Turkey / Germany episode here). In Germany, within 20 years, the Brotherhood plans to establish universal Sharia law there. In France, the Muslim Brotherhood has already laid the foundations for an established Islamic society, as demonstrated in Yehezkeli’s chilling episode on France.)

Laments Ayan Hisi Ali, the Western obsession with terror makes it blind to the longer-term effects of Da’wa outreach. Even Crown Prince Mohammed bin Salman in his recent Time magazine interview stated that the biggest current danger of political Islam is not in the Middle East, but in the West.

“False Identity” presents a series of extremely sobering documentaries. However, this superb series does not cover MB infiltration into institutions like law enforcement, education, interfaith centers, media agencies and even economic institutions.

The film’s monumental message: this is America’s 11th-hour wake-up call.

We must protect our community, families, children and grandchildren and destroy Islamic ideology. We should not let Muslims dictate the rules for public or private discourse. The media, political leaders and educational institutions must cease political correctness in its tracks. We must publicly and proudly redefine the false “Islamophobe” label to a true moniker: “legitimately Islamo-scared.”

Calmly explain the ideological dangers to all who will listen. Join and support individuals and organizations that fight this menace. Counter the threat with zeal equal to that used by supremacist Muslims (and their Leftist enablers) to implement Sharia.

Otherwise, subversive Muslim Brotherhood activities will eventually destroy everything dear to us; as the notorious Yusuf al Qaradawi indicated “We will conquer Europe, we will conquer America! Not through sword, but through Da’wa.”

The Strange Death of Europe is already a reality. What will it take to prevent such a disastrous outcome here in America?

Itu Laze is a pen name.